It’s morning, and a group of glass artisans are bustling about in a spacious, brightly lit 19,000-square-foot factory in Tempe. The high-pitched whine of a polishing machine provides a deafening backdrop in the high-ceilinged room. When the machine stops abruptly, the room falls silent. In the midst of this industrial atmosphere, the employees of Meltdown Glass are crafting stunning custom art glass, each piece more beautiful than the last.

Donning safety glasses as well as gloves to prevent fingerprints, creative director Chris Klein cleans enamel paint from the edges of a textured door panel that he fashioned from a large sheet of blue architectural float glass. He’s preparing the piece for a second firing in the kiln where the paint, made from powdered glass, will glaze over and transform into a darker shade of sapphire with shimmering multihued highlights in the low cavities and high points. “Sometimes I’m surprised at the colors I end up with, but that’s part of the artistic process,” he says.

The kiln beds are covered with a layer of plaster composite powder that becomes a canvas for the melted glass. Klein starts with a blank slate, raking the powder for a smooth finish. To create different textures, he imprints the powder with everything from found objects, such as seashells, river rocks and bamboo reeds, to patterned rollers. Once the texture is set, he carefully places a raw sheet of clear glass atop the powder and closes the kiln. The glass melts down at 1,450 degrees for 24 hours, picking up the texture.

1. Creative director Chris Klein demonstrates the way light moves through a piece of glass that’s been sprayed with vitreous enamels to create a firelike effect. 2. Designer Bri Jazembak, left, creative director Chris Klein, center, and owner Pete Hayes pause in front of the kiln room door, which is crafted from artistic metal with cast glass inserts. 3. Sheets of glass with rich textures and vibrant colors sit in the factory waiting to be finished and shipped to customers. The company’s artisans often create products using clear float glass but, depending on the project, also work with low-iron, tinted and art glass as well as glass with specialty coatings and finishes.

Meltdown Glass was founded in 1993 by BJ Katz, a visionary glass artist and 2006 Phoenix Home & Garden Masters of the Southwest award winner. She served as a mentor to Pete Hayes, who began working with Katz full-time after graduating from Arizona State University; in 2017 he became co-owner of the company.

“She was always the artistic creator, and I was very good at business and engineering, details, pricing and customer relations,” Hayes says. “We each had skills that the other one didn’t.”

In 2018, Katz passed away after battling cancer, and Hayes took over the business, but her legacy and artistic vision continue today.

Klein first learned of Katz’s work in a 2000 Phoenix Home & Garden article. Fascinated by her glass creations, he reached out to the artist for an interview. “It was serendipitous,” he says. “She offered me a job within the first five minutes.” Before moving to Arizona in 1998, Klein attended the Cleveland Institute of Art with the intention of becoming an illustrator. Instead, he switched his major to sculpture, with a minor in glass art, and never looked back.

More than 25 years after it began with a single kiln in a garage, Meltdown Glass has grown to include 10 employees and seven kilns. It has the largest capability for creating sheet glass in the United States—up to 90 inches by 150 inches—and offers 40 unique textures in a rainbow of colors. While most of the company’s Arizona-based jobs are residential—from front doors and tabletops to decorative art installations and kitchen backsplashes—it has a wide portfolio of commercial projects across the globe.

Hayes points to a table that is covered with large rectangular panels of thick glass that has a darkened, aged appearance. They’re the original 1880 windows from the famed Biltmore Estate in North Carolina. Meltdown Glass is restoring the old panes as well as re-creating new ones for the historic home.

Locally, Valley residents may be familiar with the company’s multicolored donor wall at Desert Botanical Garden or the eye-catching glass stairway at Talking Stick Resort.

When creating custom pieces for bathrooms, including shower doors, sinks and privacy windows, Klein typically works with homeowners’ architects and/or interior designers. Taking into account the client’s color palette, layout, wall coverings, flooring and windows, he makes drawings for review and approval and then provides small square samples, usually 10-by-10-inch, to show what the finished creation will look like. “I always approach the job from a site-specific perspective,” Klein says. “What will this piece of glass do to enhance that space?” A profusion of prototypes fills a small showroom—they’re piled on tables, leaning against walls and even stacked on shelves that are topped with some of Katz’s original glass figurative sculptures.

For Hayes, residential projects represent a true collaborative effort between the client, designer, architect and manufacturer. “These can really be cutting edge because the personality of the homeowner becomes infused in the product. Residential is where true innovation is happening in design,” he says.

Interior designer Angelica Henry has worked with Hayes and his team on a variety of homes. “Pete always shows me the latest and greatest new samples and techniques,” she says. “Art glass is one of my favorite elements to incorporate into a project. It adds a different dimension to the space.”

Architect Mark Tate agrees. He frequently incorporates custom pieces from Meltdown Glass, such as showstopping doors, into the luxurious homes he creates. He notes that the artisans are always willing to take on any task or idea that he presents to them. “As architects, we can only envision these details with the help of really skilled and talented craftsmen,” he says. “They help us push the envelope.”

Tate recalls a home he designed in Desert Mountain that featured a sloped maize-colored bathroom sink fashioned entirely of glass. “That sink is a great example of how the artists got together and figured out how to make a daily functional object into this phenomenal piece of sculpture that by all rights belongs in a museum.”

With help from Klein, Cano places the glass on a wheel-equipped table for cleaning.

Once the glass is spotless, Klein and the team carefully wheel the table and glass adjacent to the waiting kiln.

To move the glass to the kiln, the team places suction cups outfitted with long metal grip handles on top of the glass. On the count of three, they slide the glass in place.

Once the glass is positioned, Jazembak and Cano remove the suction devices and then Klein cleans the inevitable fingerprints and smudges from the glass that occur during the move.

Hayes, production supervisor Donna Olsen and Klein push the glass into the kiln where it will fire for a day and a half at 1,500 degrees.

“Residential projects can really be cutting edge because the personality of the homeowner becomes infused in the product.”

Back at the factory, production lead Omar Cano meticulously cleans a large piece of glass that is sitting on top of a dolly. He is removing any traces of dust or fingerprints prior to the raw sheet being transported to the kiln. Six people are needed to carefully lift and place the 452-pound panel onto mini plaster blocks above the textured kiln bed. “The glass is so big and heavy that it would crush the mold, so we have to suspend it above,” explains production supervisor and artisan Donna Olsen. As the kiln heats up, the mold rigidizes. The hot glass then forms downward and is cast into the plaster composite.

Staffers at Meltdown Glass participate in all aspects of the business, says designer Bri Jazembak, who also handles purchasing. “Everybody is trained to do everything, but you excel where you excel,” she notes. “You have the opportunity to learn every part of the process.” Today, Jazembak is cutting out a reedy-looking pattern made from ceramic fabric. The material will be used to create an impression in a piece of glass.

Even though temperatures inside the factory can reach extreme highs, especially when the heat from the kilns mixes with the rising heat outside, no one complains. That’s because the talented group of artisans at Meltdown Glass are fiercely devoted to their craft. “Glass is such a beautiful material to work with—the way the light plays on it, refracting and reflecting,” Klein says. “We’re still learning new things every day about how far we can push it.”

1. After fashioning cattail cutouts from ceramic fabric, Jazembak creates a design that will make an impression in the glass when fired in the kiln. The finished product will be a wall with a botanical landscape motif. 2. Glass laminator Rich Lamothe injects a clear polycarbonate resin interlayer between two sheets of glass. The process, called tapeless laminating, adds a safety rating to the glass that increases its strength and impact resistance. 3. A maize-colored glass powder room sink was custom-made for University of Michigan fans at their Scottsdale home. 4. The Tempe-based company proves that glass isn’t just for windows or room dividers. For this contemporary floating staircase, Meltdown Glass created bold stone-textured, kiln-cast cobalt-blue treads. 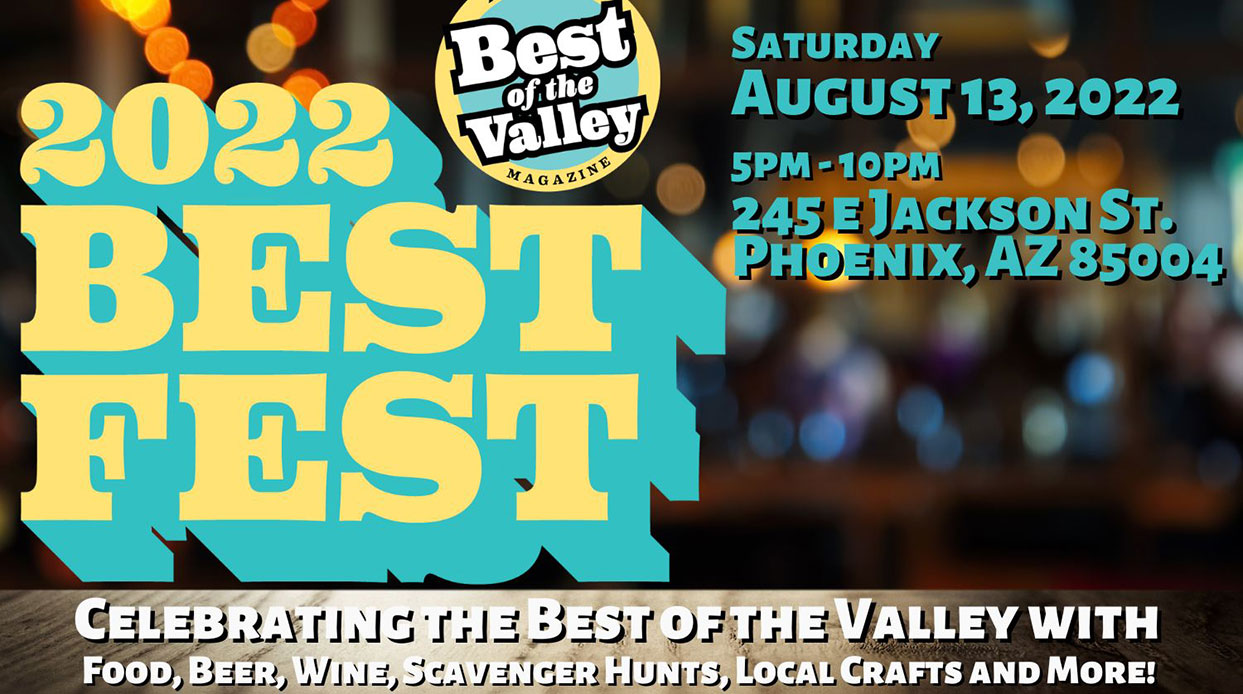 Best Fest is the Main Event in the Valley This Week