Santa Barbara Style is at Home in the Desert

Compromise is part of everyday living. For Sherrod and Larry Deputy, it meant giving up a boat and personal watercraft in order to gain golf, gorgeous desert and mountain views, and a Spanish-influenced home with a gracious, traditional interior.

The couple’s journey to North Scottsdale began in Indiana, where Larry owned a boat-manufacturing company. As a result, he and Sherrod, as well as their two children, spent much of their vacation time on the water—on lakes in the Midwest and on Florida’s Gulf Coast. Then they discovered the Arizona desert. They fell in love with the dry, sunny climate and soon were spending spring breaks and good parts of the winter season in a series of condos and homes in the Valley. In addition to their main house in the Hoosier State, the Deputys also had a summer dwelling on a lake in Michigan.

A few years ago, they opted to simplify. “When we retired, we decided we wanted one home, not several houses,” explains Larry. “We call it ‘right-sizing’—small enough for the two of us but big enough for when our family and friends visit.” Adds Sherrod wryly, noting the challenges of keeping track of where items are stored, “I wanted to know where the ketchup was.”

They zeroed in on Scottsdale and found a half-acre site surrounded by open space in the private neighborhood of DC Ranch. “We loved it because it has fabulous views of the McDowell Mountains, the golf course and city lights,” says Larry. “We found out later that all the early promotional shots of the community were taken on our lot because of its great location.”

To design a residence that would best suit the property, Sherrod and Larry selected architect Erik Peterson, a Phoenix Home & Garden Masters of the Southwest award winner. “We had looked at another house that Erik had done,” says Sherrod, “and we tried to buy it, but the timing wasn’t right. In the end, it all worked out because we had this home created specifically for our needs.”

1. The owners were able to work in some furnishings and art from their previous residences. In the dining room, a table built by an Amish craftsman from Indiana is a reminder of the family’s Midwestern roots. 2. In the great room, a bank of French doors, clerestory windows and simple wood beams add cozy character to the open space. The seating area features a lounge-worthy sofa and armchairs meant for relaxing. 3. In back, travertine pavers underscore the covered dining patio, which overlooks the desert and mountains.

According to Peterson, the 4,400-square-foot abode offers a modern spin on Spanish colonial style. “It is traditional but has cleaner lines,” he points out. “It’s designed to be a more casual house.” With pale gray walls, a charcoal-colored tile roof and black-framed windows, the home’s exterior color scheme is contemporary but details, such as shutters, arched openings, copper gutters and sculptural chimney caps reference classic Southwest revival themes.

Using an H-shaped floor plan, the architect created courtyards for the front and back of the house. One end of the dwelling includes an attached guest casita, garage and guest bedroom, while the other includes his-and-hers master suites that are connected by the master bath. Linking the two wings is a great room that incorporates the living and dining spaces, while the nearby kitchen is a separate space with its own family room.

1. A limestone-clad fireplace with crisp lines reiterates the abode’s pared-down architectural theme. Accessories and art were also kept simple. 2. The great room affords views of the nearby McDowell Mountains. The French doors, softened by luxurious draperies, connect the interior to the backyard. 3. The home opens directly onto the pool patio. Clean lines and minimalist plantings give the low-maintenance exterior modern flair. 4. Traditional cabinetry, an apron-front sink and glass subway tile give the kitchen a vintage-yet-modern warmth. An interior window is a point of visual interest that also brings light into the adjacent pantry.

Despite the clearly defined areas, “everything is flush, and there are no thresholds,” Peterson notes, explaining that a number of inclusive, universal design elements were included so that Deputys could age in place in their retirement home. “It’s all on one level for accessibility by wheelchair or walker. Doorways are wider, the shower is bigger—but nothing is obvious.”

Inside, “the look is traditional-meets-transitional,” explains interior designer Caroline DeCesare. “It’s casual and comfortable, with refined touches.” Against a background of European white oak flooring, cream-colored walls, beamed ceilings and patterned tile details, DeCesare used a color scheme of pale gray, putty, cream and blue, working in furnishings and art from the Deputys’ previous residences that they wanted to keep with new pieces. In the living room, a deep sofa, four armchairs and several ottomans invite lingering and long conversations in front of the limestone-clad fireplace. Luxurious draperies across the French doors frame views out to the back patio and provide privacy after the sun sets. In the dining room, a table that Sherrod and Larry had made by an Amish craftsman in Indiana provides a just-right reminder of their Midwestern lives.

In the family room—one of the owners’ favorite spots—DeCesare designed custom bookshelves to show off a collection of leather-bound tomes, family photos and personal objects. “The books and shelves give the room a warm feeling,” Larry remarks. He adds with a laugh, “Sherrod was a literature major in college, and I was a literature dropout. They say opposites attract.”

Landscape designer Jeff Berghoff kept the outdoor spaces simple and easy to maintain. Covered patios provide places to converse and dine. Blue agaves and candelilla plants line the travertine walkway to the front of the house, where an antique trough fountain provides a cooling note. In the backyard, a pool with integral spa reflects the towering forms of the McDowells. Dwarf oleander and aloes provide texture without distracting from the scenery.

1.  In the kitchen, a patterned tile backsplash complements the muted hues of the cabinetry and countertops. 2. Custom shelves in the family room display the owners’ collection of books and family mementos. 3. The narrow butler’s pantry situated just off of the garage provides additional kitchen storage as well as space for a small home office. 4. In the master bathroom, cafe curtains offer filtered light and privacy for soaks in the deep tub. A soft color palette and organic accents underscore the room’s relaxing vibe. 5. The master bath’s walk-in shower shares desert views and natural light with the adjacent tub area.

After a year of Sonoran living, Sherrod and Larry have no regrets about growing permanent roots in the desert—and now they always know exactly where the condiments are located. “The house is amazing,” Larry says. “It’s easy to entertain in and, when we have visitors, they have privacy in the casita. When it’s just us, we love to sit and look at the vistas.”

As for their boating life, apparently there was a compromise on that compromise. “This is a great lock-and-leave house,” Larry comments, “so we just got back from two weeks on the lake in Michigan. There’s also a fishing trip planned for Florida. That’s how we’re going to get our boat fix while living in Arizona.”

Linked by the bathroom, the master bedrooms showcase the couple’s different design aesthetics. His (left) features more modern lines and richer hues, while hers is soft and airy. 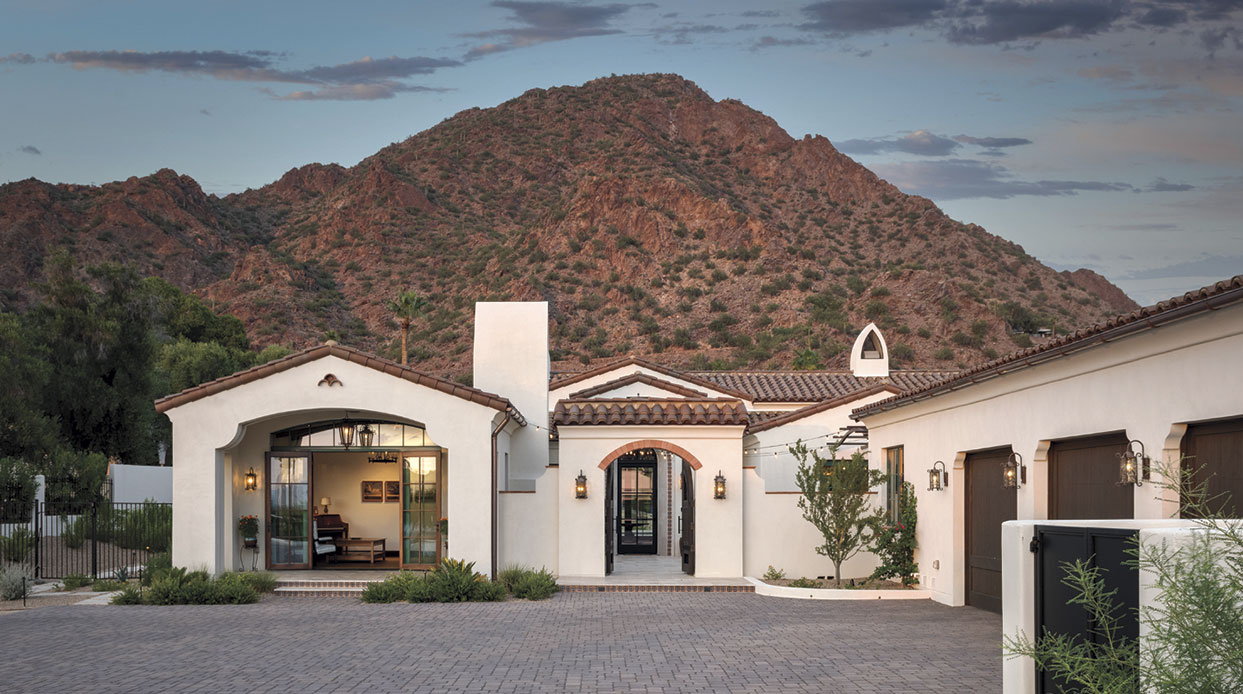 An Arizona Native Buys and Rebuilds Her Childhood Home 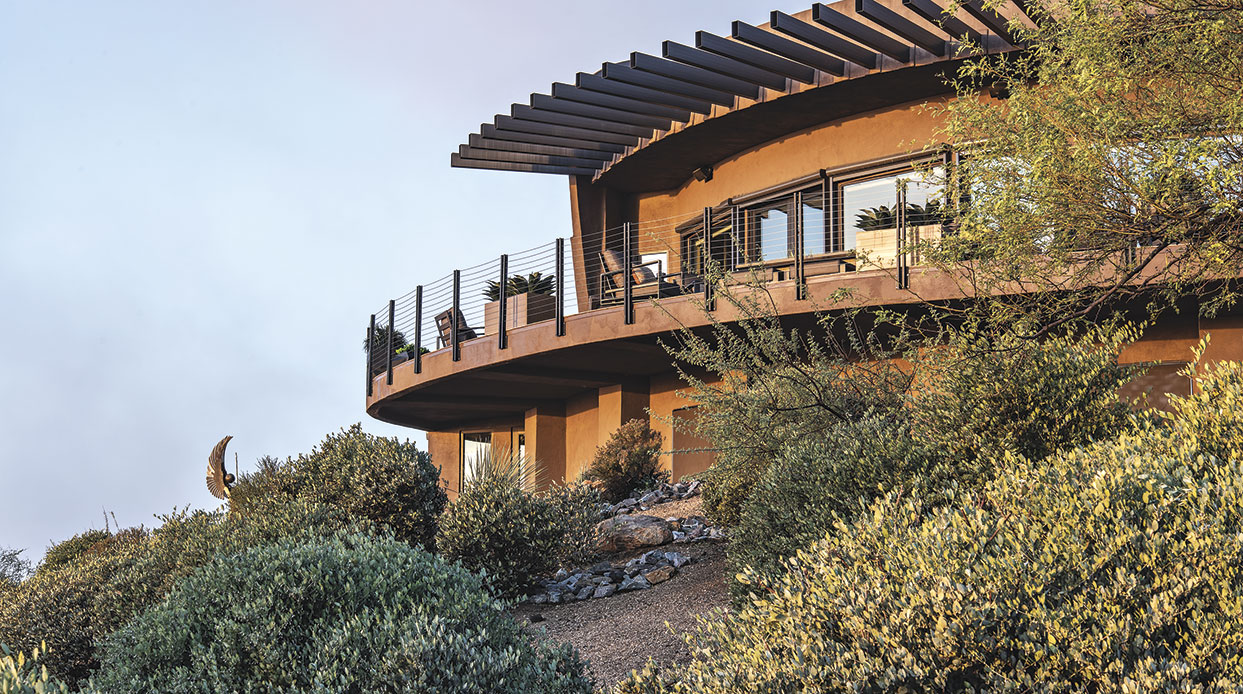 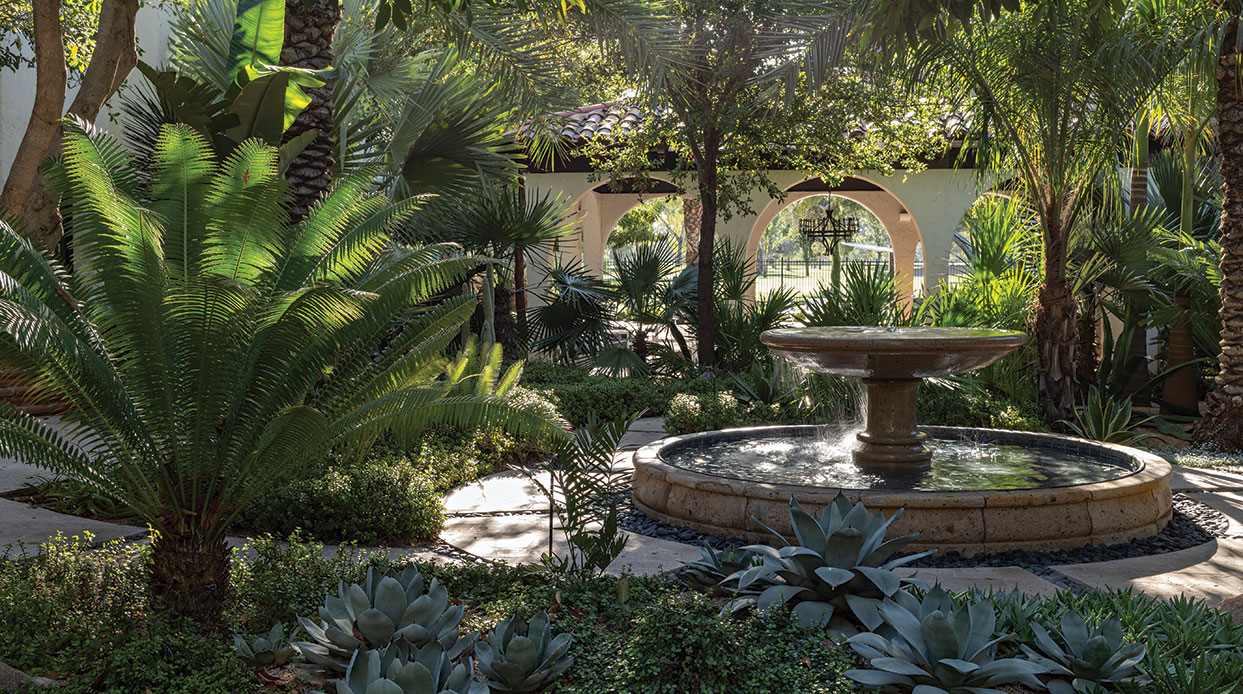 Explore Lush Gardens and Spanish-Inspired Interiors at This Storied Estate