Phoenix architect Mark Tate’s love of design began at an early age and continues to inspire him in all walks of life.

“No piece of architecture is ever created by any single individual,” says Arizona-based architect Mark Tate.

“It takes a great team to make good things happen and I’ve been fortunate to have been surrounded by incredible talent throughout my career.”

Having been in the profession for 40 years—14 of those with his residential design firm, Tate Studio Architects in Cave Creek—he understands the importance of his relationships with clients, his studio team, builders and tradespeople. “We all take pride in our work and we all know how fortunate we are to be doing what we do. There is no other project type that gets more personal than designing a home for someone, and the nature of the relationships that develop along the way are unequaled in our profession.”

Tate, the father of nine children and husband to  Lisa, who has her own custom-home building business, has always had an affinity for design in one form or another. “I grew up in Oklahoma and Texas, where my father was a mathematician/computer engineer and my mother was a homemaker who spent much of her spare time making arts and crafts. So I became interested in art and science at a very early age. I was constantly encouraged by my teachers and parents to pursue those interests,” Tate recalls. In 1977, after graduating from high school, he and his parents relocated to Phoenix and he has never stopped creating.

Shortly after he moved to Arizona, Tate was inspired by the work of Hopi artist Charles Loloma and began making contemporary jewelry for shops in downtown Scottsdale and selling his own drawings and paintings to several galleries. Later, he landed at Arizona State University, where he studied sculpture under artist Ben Goo. “During that time, I ended up getting married and kids came along soon after. By the time I was a senior, I came to the realization that life as a starving artist was not sufficient to put food on the table, so I briefly went to work for an art store and took drafting classes with the eventual goal of studying architecture.”

When an opportunity to work with architects Mike Munninger and Rich Fairbourn came his way, Tate jumped at it. “I started out doing whatever I could to help and became immersed in all things architecture,” he recalls. “I didn’t get paid at first, but I didn’t care. I was like a sponge.” Later, they invited him to work full-time for their firm and that’s when he says he found his calling. “Mike and Rich ran in circles that included the likes of Al Beadle, Eddie and Neil Jones, and other ‘Desert School’ architects. I was very fortunate to have been exposed to the work of all of those incredible talents and developed a love for how  they inspired desert architecture.”

In 1991, after 10 years with Architectural Alliance, Tate became a licensed architect. During that time, he worked with numerous Indian Nations all over the Southwest, designing and administering the construction of residential communities. “I have fond memories of that time,” Tate says. “Some of the areas were so remote that the National Guard had to ferry in food with helicopters when it snowed. I fell in love with the culture and became close to the people I collaborated with, and I came to understand what makes a home work.”

The architect eventually joined Jones Studio in the mid-’90s tackling municipal projects and later worked with Doug Fredrikson Architects creating clubhouses and community centers all over the Southwest. “Those experiences working with the incredible talents of Mike Munninger, Eddie Jones and Doug Fredrikson were key to formulating my appreciation for great building design,” Tate recalls. “The opportunities I had with each of them, working on many different project types, ultimately clarified my calling to create residential architecture and gave me the foundation I needed to start Tate Studio Architects.”

Well-liked by his many clients, Tate says that the best part about his job is designing spaces that are not just functional but also create a backdrop for life events. It’s a term Tate calls “place making,” which, he says, “is not just about the creation of space—it’s also about creating the places where life happens. Designing and working on homes for people elevates the idea of place making to a whole new level for me.”

A couple who owns two Tate Studio-designed homes say they were impressed by the architect’s great vision and the way he monitors every project. “On Fridays, he would walk the construction site with us and his mind was always creating,” the wife fondly recalls. “Mark would come up with new ideas and just suggest them to us as options. They always seemed to be a good thing to do, so the joke between my husband and I was that Mark’s walkabouts on Fridays cost us anywhere from $5 to $10,000!”

“Place making is not just about the creation of space—it’s also about creating places where life happens.”

1. The living room’s stone fireplace and cedar walls and ceiling create a dramatic focal point in the light-filled space. The room opens to the kitchen, dining area, deck and entry. 2. Tate brought the exterior finishes indoors with metal siding that wraps the kitchen’s appliance wall, and cedar that anchors the pass-through window wall. 3. With its sliding corner doors open to the deck and views of the forest beyond, the bedroom has a treehouse ambiance. 4. The master bedroom suite is much more than just a place to sleep. “It’s a retreat, a low-stress home office, a place to unwind,” says the architect. A key focal point is the contemporary fireplace with steel rods standing on end under an impressive black steel hood. 5. Cedar siding used on the home’s exterior was brought in for the wall of the light-filled stairwell, which leads to the basement. The wine rack is a modular system with LED lighting that illuminates each bottle. “Mark’s creative imagination always brings a unique design to every project,” notes builder Dan Couturier. “I consider him a contemporary architect who always thinks outside the box.” 6. Steel beams and posts and natural stone define the elevated patio.

Another pair of clients expressed high praise for the architect. “He is well-educated in design and architecture but he is also very down-to-earth and genuine,” says the wife. “Mark’s family is from Texas and he has ‘cowboy’ in his blood. He drives a bright red F-250 truck that he loves. He is not like other artists that tend to let their egos get in the way. Like a cowboy, he is honest and genuine and you always feel comfortable around him.”

One of the things Tate is known for is an end-of-the-year tradition of making salsa with his staff and gifting it to clients, family and friends, of which there are many. “My wife and I have known Mark and Lisa for a very long time,” says builder Richard Fairbourn. “Our first Christmas gift to them was a holiday cookbook with salsa recipes. Mark proceeded to make a small batch and gave the salsa to clients and friends. Last I heard, he is up to about 400 bottles a year.”

1. Window walls, sliding doors and a sizable second-story deck give the homeowners plenty of opportunity to appreciate the rustic high-country surroundings. “We want our clients to enjoy the outside any time of day, all year long, whether the doors are open or not,” explains Tate. 2. A multipiece LED glass pendant light with a polished chrome finish is the crown jewel of the combined dining and kitchen area. “The homeowners love the playful way this fixture and the finish reflect light,” says Tate, whose firm also did the home’s interiors. 3. A mirrored linear light fixture illuminates the island and open cabinets pull the siding color further into the room. “[Architect] Eddie Jones told me once that it is the architect’s responsibility to show people things they have never seen before. That message has always stayed with me and finds its way into my designs,” notes Tate. 4. The bathroom’s organic vibe is sophisticated and spa-like. Poised over a freestanding tub, a glass pendant adds an elegant note to the space. 5. This basement does not feel like a basement at all,” Tate muses. “Why would anyone want to leave?” From the bar area, guests can walk directly out to the patio, the hot tub or onto the golf course. 6. Not one to be pigeonholed for one type of design aesthetic, Tate says that most of the homes he’s working on these days fall into the modern and contemporary styles. Many, including this property, are also about blurring the line between inside and out. “From the living room, dining room and entry, you can see the tops of the pine trees, the sky and elk trotting through the nearby golf green,” he points out.

The architect’s latest project came about after he wanted to get into making art again. “For me, I started out in art, and architecture was just an extension of that. I have always intended to get back into it.” At the same time, he discovered that other creatives in his field were looking for an artistic outlet. In 2019, he built a gallery next to his office to display their pieces, along with his. “It’s not about making a living with art, it’s about making art for the sake of art and offering a place for others to showcase their work.

“I’ve had wonderful conversations with many artists over the past year and have been exploring different ideas for shows that we could facilitate here,” he adds. “I’m very excited about where this will lead.” 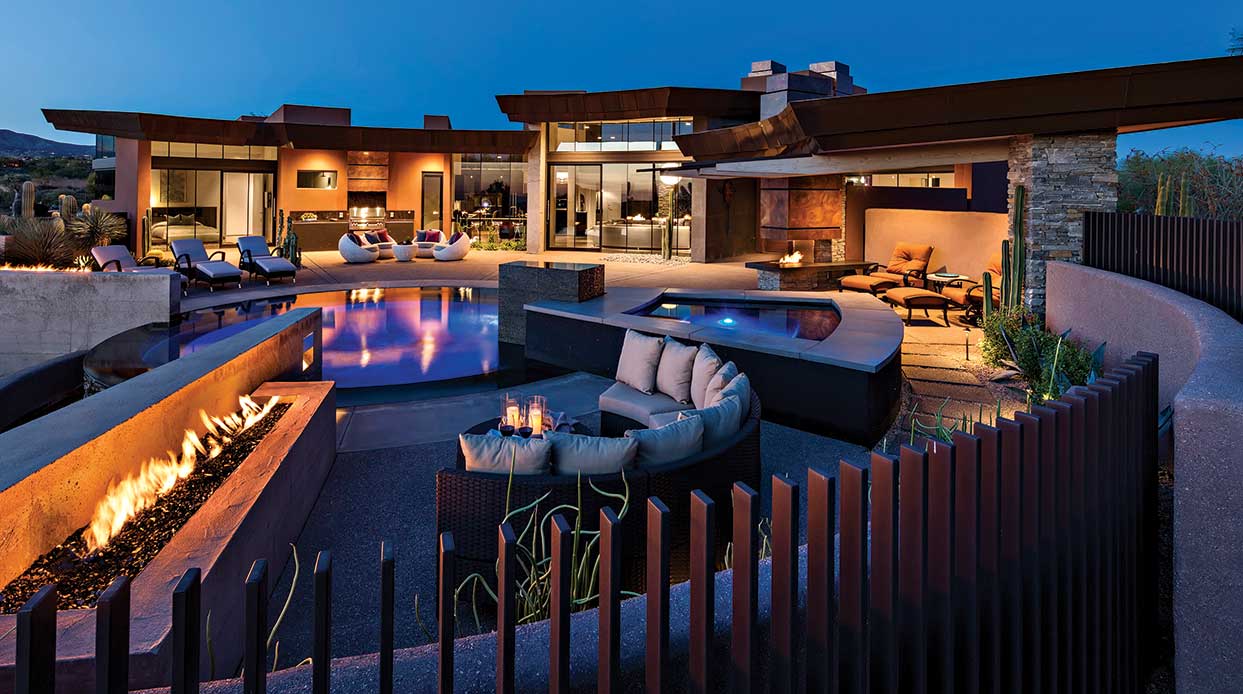 Curve Appeal: Mirabel Home is a Study in Advanced Geometry 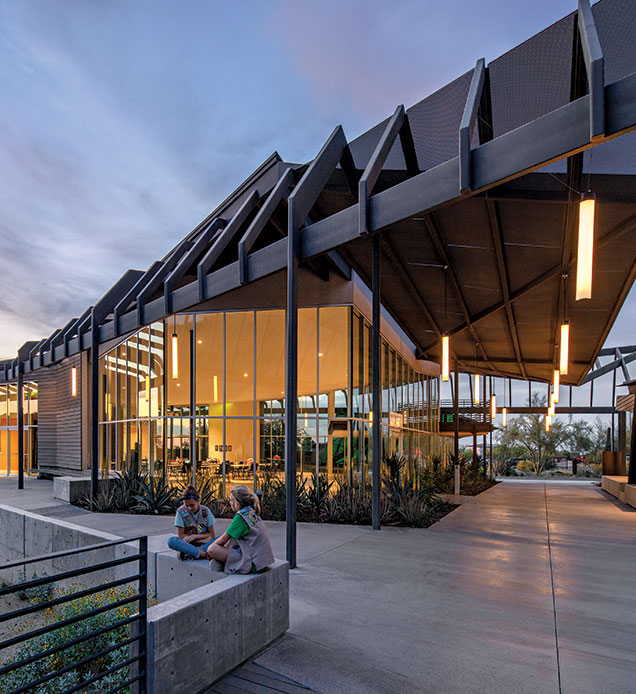 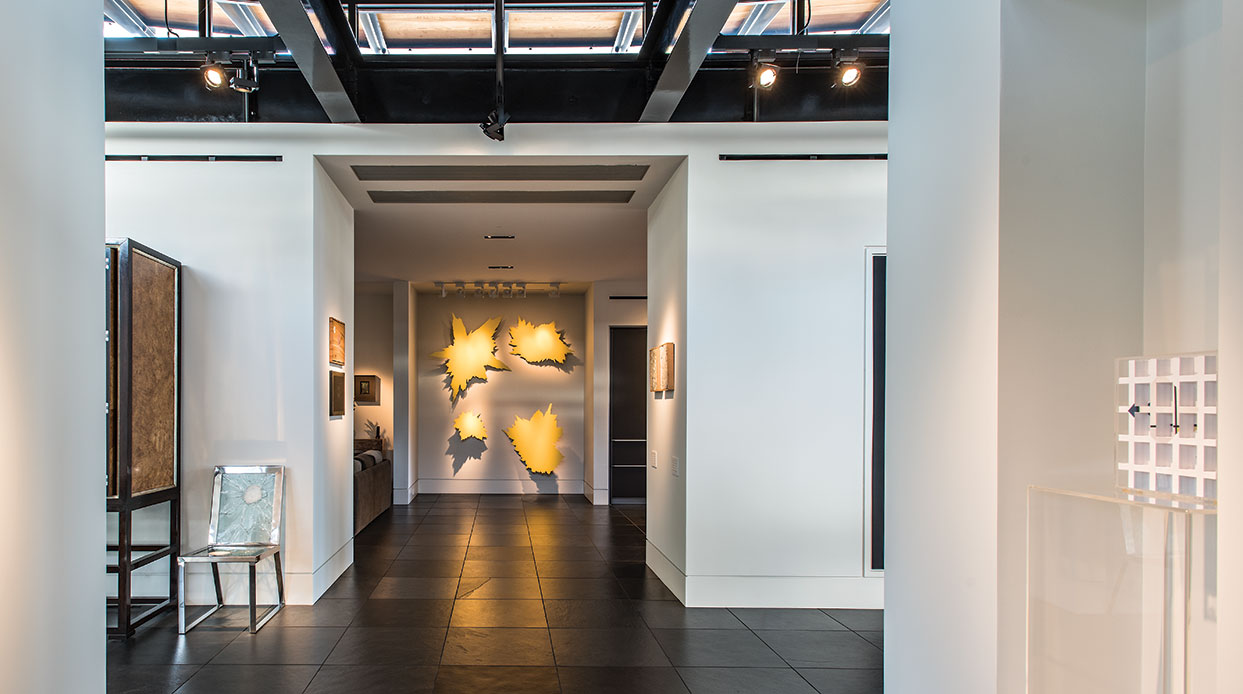