A landscape update is infused with new life that echoes its majestic surroundings.

It’s been said that every golf course has a signature hole. It’s the one everyone remembers for its challenging tee, tricky green or uneven fairway, but more often than not, it’s the hole with the most breathtaking view. When Kathy and Tom Plimpton began looking for a golf course property in North Scottsdale, they knew they found something extra special.

Situated at the base of picturesque Pinnacle Peak, the couple’s property sits adjacent to the course’s trademark 14th hole, which just happens to look directly up to the mountain’s iconic boulder-strewn spire. For Tom, an avid golfer, and Kathy, who enjoys an occasional game, it was the ideal backdrop to build a home. “The previous owner hung onto the land for more than 30 years before deciding to sell, and we were lucky enough to have found it,” Tom says

Architectural designer Tom Mooney conceived a Southwest contemporary-style house that features massive walls of dry-stacked ledge stone that complement the mountainside and provide separation for the outdoor spaces. One towering wall in the front yard “divides the motor court, the sidewalk and courtyard and, at the rear patio, another stone partition separates the great room and master patios while doubling as an outdoor media wall,” Mooney explains.

The Plimptons had a beautiful landscape installed after the home was built, but several years later there were things they wanted to change. “Some of the plants weren’t doing that well and needed to be switched out,” Kathy remarks. “Also, we were looking for more of a dramatic vibe with bigger everything. We wanted clean lines and structural plantings. Nothing too bushy.” Having seen the work of landscape designer Peggy De La Garza, a Phoenix Home & Garden Masters of the Southwest award winner, whose projects have graced the couple’s community for years, they asked her to renovate the expansive driveway entrance as well as the front courtyard into more statement-making spaces. She also added her special touches with fresh container plantings.

De La Garza says she and her crew started by building around what was already there, bringing in additional plants and moving others around to form clusters that would create more impact. “Mexican fenceposts and firestick pencil cacti, with their upright structures, look much more impressive as a group than as single specimens,” she notes. The designer also relocated existing vegetation that wasn’t doing well to areas with different light exposures where they would fare better. A number of Agave geminifloras, for instance, were moved from the northeast-facing motor court walkway to the backyard where they could get the sun they needed to thrive. She then replaced the agaves with shade-tolerant Quasimodo agaves (A. ‘Cornelius’).

1. The Plimptons purchased these basalt stone pillars as a focal point for the entry courtyard’s water feature, which is made of black powder-coated stainless steel and a matte black porcelain tile floor. Water cascades over its edges into a layer of black beach pebbles. For organic flair, landscape designer Peggy De La Garza lined the bed with Blue Glow agaves. 2. Opposite the water feature is a redesigned area of the courtyard where a Silver Peso Texas mountain laurel is perfectly framed against a stacked stone wall. De La Garza surrounded the tree’s steel planter with Mexican fence post cacti and Blue Glow agaves. 3. As the sun sets behind the mountain, the backyard puts on its last show of the day. A large fire pit at left mimics the shape of a water feature-turned-raised plant bed at the far edge of the garden. Rows of golden barrels and variegated agaves, along with synthetic grass enhance the serene setting. 4. “We didn’t want to interrupt the view of the natural setting by adding too many plants,” says Tom. “We wanted a very organic feel. Everything inside and out is designed at a 90-degree angle. There are no curves. It’s the theme of the house.” 5. A maintenance-free putting green is the perfect perk for this golf-course property. Sculptural desert flora puts on a pretty show.

A dramatic driveway entry is key to good landscape design, as it not only provides curb appeal but also sets the tone for the rest of the grounds, De La Garza notes. She created a stunning natural setting by adding elevation changes and boulders, along with supplemental vegetation. A grouping comprising two specimen-size Argentine giant cacti, a Yucca rostrada, a multi-armed saguaro and other mature desert flora made all the difference. According to the Plimptons, the change was quite dramatic.

Kathy and Tom developed ideas for several of the outdoor features, including the contemporary style negative-edge pool, which incorporates a raised floating spa that overflows into the pool and includes water jets with colored lights. Inside the entry courtyard, the couple envisioned a raised infinity-edge water feature highlighted by basalt stone pillars as focal points. And just off the master bedroom patio, a striking stone-and-metal fire element designed by Mooney is based on a concept the homeowners presented to him. Inside its base is a stainless steel sculpture that looks like flames when the gas is not turned on.

1. Copper fascia and stacked ledge stone define this low-profile home in North Scottsdale conceived by architectural designer Tom Mooney. The homeowners say these materials speak to the Southwest vernacular. 2. Initially, the front driveway was lacking in appeal, so De La Garza added statement-making flora and boulders to create a natural, desert environment. She complemented existing vegetation by clustering additional plants of the same variety for a stronger visual impact. 3. Flanked by pillars of stone, a stainless steel sculpture inside a fire pit looks similar to stacked sticks forming a campfire. When lit, flames shoot up through the rods. “It’s quite dramatic,” says homeowner Kathy Plimpton. Because the metal can turn black from the fire, the homeowners periodically wipe the sculpture down in order to maintain its original finish. 4. The patio exudes a modern vibe with its clean-lined furnishings, simple accessories and matching planters filled with totem pole cacti and red barrels. Kathy came up with the idea to install a barn-door-style wood panel on the stone wall to hide their TV.

A sunken fire pit, putting green, patio furnishings from Indonesia and neutral-hued containers add to the aesthetic the Plimptons were going for. “Kathy and I love the muted desert look,” says Tom. “We didn’t want a lot of color or busy elements in the yard but more of a geometrically balanced design. We’re the kind of people who value a perfectly straight cactus or the way several Mexican fencepost spears line up. This excites us.”

Now, when the couple drive up to their home or sit inside looking out at their courtyard, they find themselves inspired by the landscape. “Renovating the front yard was a quick solution, yet it made such a big difference,” remarks Kathy. “When it was done, we both thought ‘now that’s what we’re talking about!’” 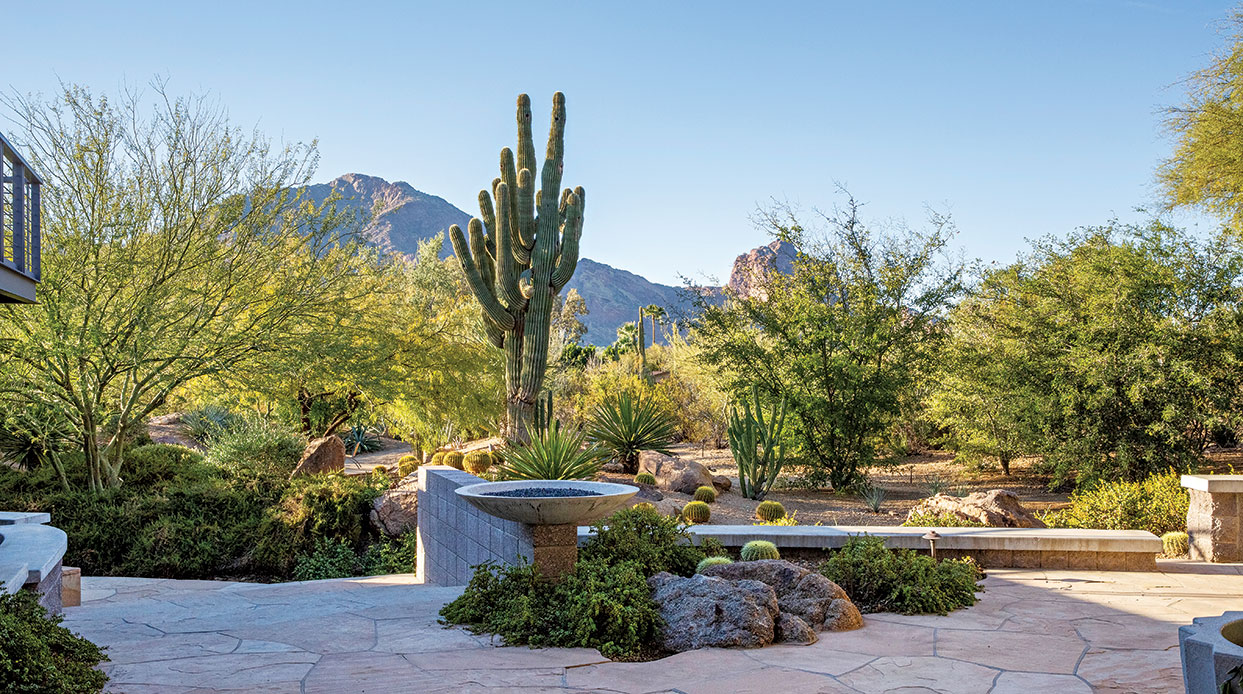 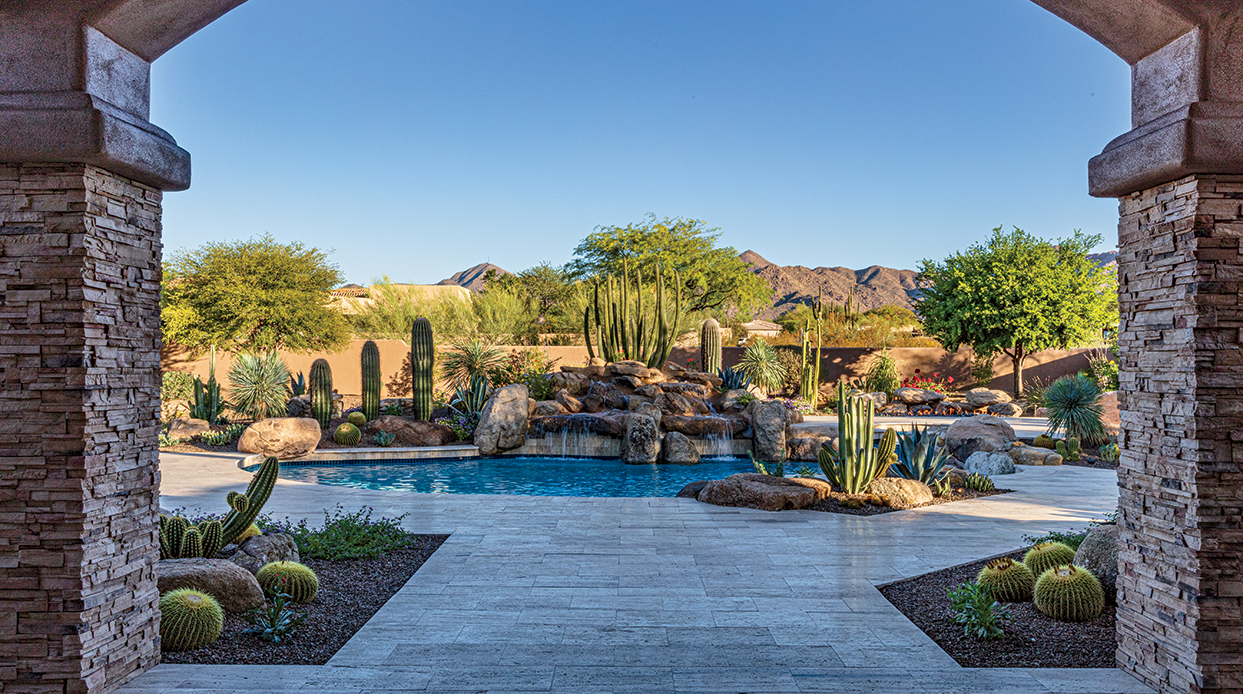 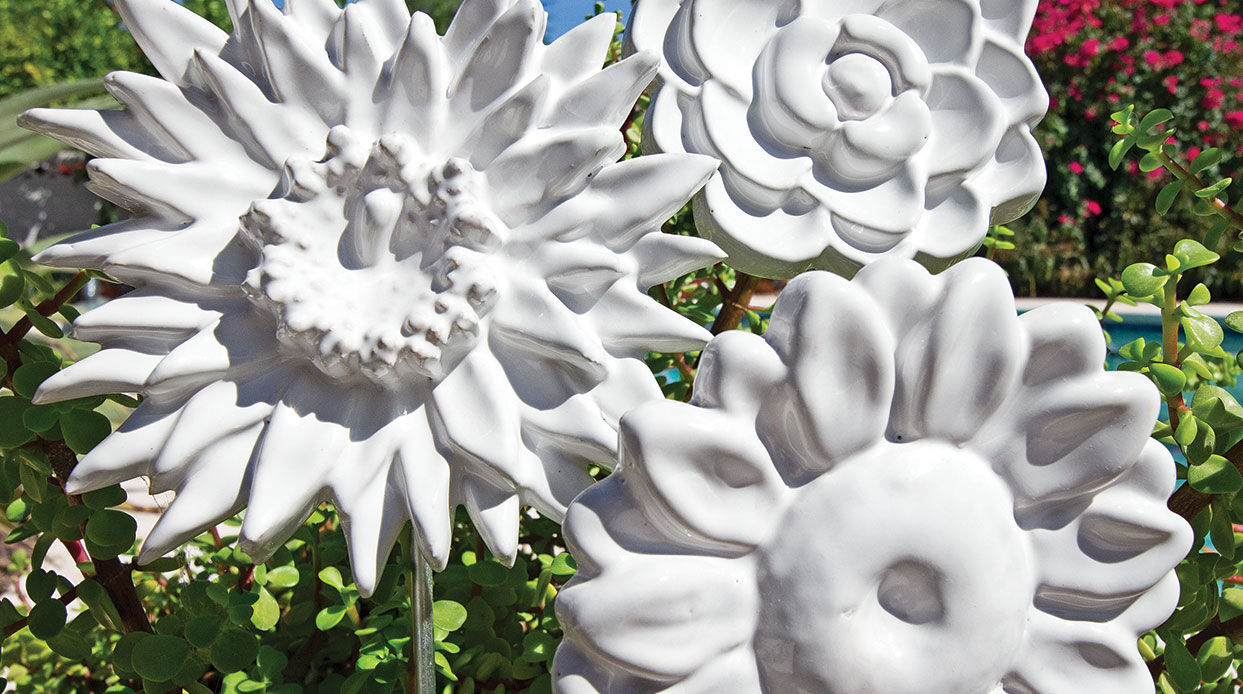