A collection of retro-themed serigraphs gives rise to a mod remodel.

In 2004, Jackie, a native Arizonan and Phoenix-based business owner, came across a print by Josh Agle, more commonly known as Shag. The five-color serigraph poster was prototypical of the artist’s signature retro-kitsch style. When she brought the artwork home, Jackie’s husband, Rex, was likewise smitten by it and all that it conveyed to him.

“My dad was a 1970s furniture manufacturer salesman who represented brands such as Steelcase,” Rex explains. “So midcentury style was imbued into the family.”

Little did the couple know then that they would soon begin curating a rapidly-growing collection of works by Shag, which, some 16 years later, would provide the focus for a design makeover of their Glendale home. As the 2010s progressed, Jackie and Rex decided that they wanted a more open and modern interior that would showcase their art and that was also functional enough to accommodate their three children, a trio of dogs and a menagerie of cats. But they knew they needed help to achieve their goal.

“This was our first time working with an interior designer,” Rex comments. “Frankly, I’m not sure we even knew what we wanted, but the house was no longer functional the way it was—dim and dated with cracking tile floors. It served its purpose when raising small kids—when you just keep your head down and move forward day to day.”

Enter interior designer Janet Kauffman. “Of all the projects I’ve worked on over the years, this house really surprised me because of the sheer disconnect between the existing decor and the clients’ fun personalities,” she says. “During the initial walk-through, I was struck by how dark and heavy the interior felt, yet scattered throughout was this crazy, fun, quirky, retro-looking art.”

1. This colorful collage showcases some of the homeowners’ collection of midcentury-inspired artworks by Josh Agle, better known as Shag. “I laughed as I hung each one,” recalls interior designer Janet Kauffman. “There’s the multi-armed bartender in ‘L is for Liquor.’ ‘Wolf’ is playing a xylophone, while the ‘Melancholy Wolfman’ roasts a steak while birds watch over him. ‘ The Covetous Neighbor’ features an abominable snowman full of swag, and there are some cool hipsters in a Brazilian cable car in ‘Bondinho Balançando.’ It’s a party wall.” 2. The original powder room was a “Tuscan nightmare,” Kauffman recalls. She replaced the travertine-clad walls, oversized ornate cabinetry and burgundy Venetian plaster with a sleek floating vanity, brass fixtures and a small-scale geometric wallpaper. 3. The vivid violet hues of Shag’s “Midnight Pool Party” serigraph add a colorful punch to this otherwise neutral vignette. The cinched neck design of the black table lamps echoes the tulip-style base of the accent table and offers a jaunty midcentury nod.

The homeowners’ largest piece by Shag, “On a Sunday Morning”—a massive print that was purchased and signed by the artist in Palm Springs on the couple’s 25th anniversary—would serve as Kauffman’s North Star in her approach to the renovation.

“Brimming with teal, orange and vibrant green colors, it was screaming to be seen,” the designer recalls. “That was the inspiration for me. Somehow, I needed to incorporate its colors and streamlined feel into this stale home. So, I took a photo of the print, placed it on the cover of my project binder, and used the image as my design compass.”

Before adding the finishing touches, Kauffman collaborated with builder Michael Brown, with whom she has worked on several projects over the years, to freshen up the home’s surfaces. “Anytime we transform a house, almost all of the creative concepts come from Janet,” he says. “My job is to take it from concept to a reality.”

According to Brown, the quintessential ’90s-era Tuscan-style abode featured faux stone “everywhere” and burgundy Venetian plaster on the walls. He stripped the stone cladding from the walls, fireplaces and kitchen hood surround. In its place, he added textured tile to the master suite and great room fireplaces. The heavy granite kitchen countertops were swapped out for crisp white quartz, which brighten the interiors and offer an easy-maintenance material for a busy family, while the range hood was given a contemporary face-lift with sleek lines and a black facing that anchors the setting. Wide-plank wood flooring replaced chisel-edged travertine floor tiles throughout for a look that is more refined and cozy.

Keeping the couple’s art collection in mind, Kauffman devised an aesthetic that is bold yet sophisticated, fun yet relaxing—with a cheeky, mid-mod twist. “Geometric and angular shapes, atomic star patterns, tiki motifs and vibrant colors had to be integrated into the finishes and furnishings,” she explains. “A neutral palette was used as the backbone of the design, which was necessary to pull off the addition of brightly hued art and fabrics.”

Striking teal tile on the kitchen backsplash and island unifies the look and echoes much of the color motif in the artwork. Kauffman also covered a pair of chic Hollywood Regency-influenced sofas in a rich lime green fabric and complemented them with orange leather poufs and hot pink throw pillows that draw on the Day-Glo shades favored by Shag.

The two rooms are now favorites of the homeowners. Rex enjoys the bright, cheerful kitchen. Its large island that allows the entire family to congregate features plenty of integrated USB ports to accommodate an array of electronic devices. “This is where we have meals and where homework gets completed,” Rex says. He adds with a laugh, “It actually became a blessing in disguise now that home schooling is the norm. We were ‘Covid shutdown-ready’ before we even knew that would be necessary.”

Jackie, on the other hand, prefers to relax in the cheerful midcentury-modern-inspired living room, where a collage of Shag’s prints are displayed above a wood console and vintage lamp. “I love everything in here,” Jackie exclaims. “It was so exciting when Janet did the unveiling. I will never forget that moment.”

On the day of the big reveal, Kauffman recalls, “Jackie walked into the living room and spoke through tears, ‘The house is so me!’ I had to literally pull her away to see the other spaces.”
But one of the most notable affirmations of the project comes from the man whose work provided so much of the remodel’s inspiration. “I don’t get the chance to see my art in people’s homes that often, but when I do, it’s nice to know they have good sense of design,” Shag remarks. “I’m impressed with the integration of the prints into the interiors and the way the color choices complement the images.”

1. The original desk nook was re-stained, and the teal tile repeated. “I added additional shelves to house the client’s kitsch collectables,” Kauffman notes. 2. Working with the kitchen’s existing footprint, Kauffman added a new island, complete with seating, and a stylish black range hood. The dated gold granite countertops were swapped out for crisp white quartz.“ A new stain freshened the perimeter cabinets, and the teal tiled backsplash provided the retro vibe the homeowners desired,” Kauffman says. “The flying globe light fixture was a must. It’s so modern and fun.” 3. “On A Sunday Morning” by Shag takes center stage in the dining room, adjacent to the kitchen. Below the art, a floating counter doubles as a serving space and homework area, with benches tucked beneath it. Made from steel, the dining table base is shaped like an abstract tree trunk. 4. What was once a double-sided walk-in shower (above left) with a glass block wall is now an airy bathing nook that features a free-standing soaking tub. A “pebble rug” adds subtle texture to the space, while a Moroccan stool and window shades adorned with an orange flying crane pattern add an exotic touch. 5. The Cantera surround in the master bedroom was dated and overpowering. Kauffman replaced it with a soothing white stone with a subtle texture, a look that’s both minimalist yet eye-catching. 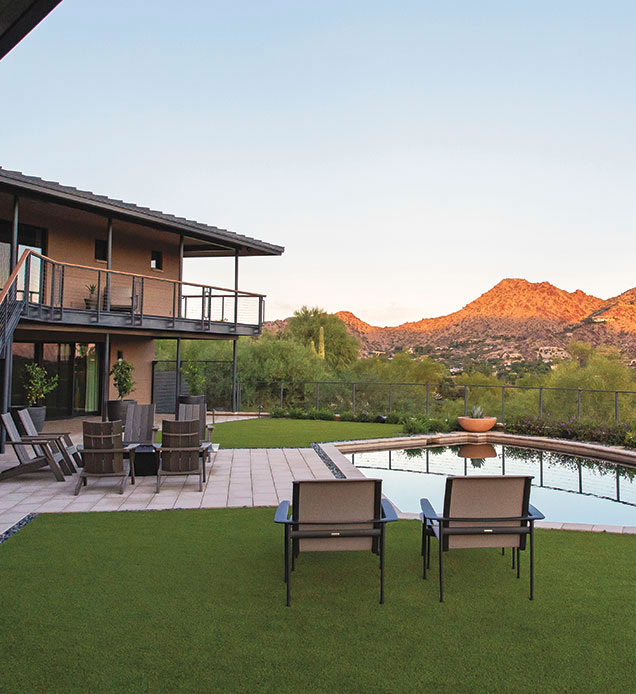 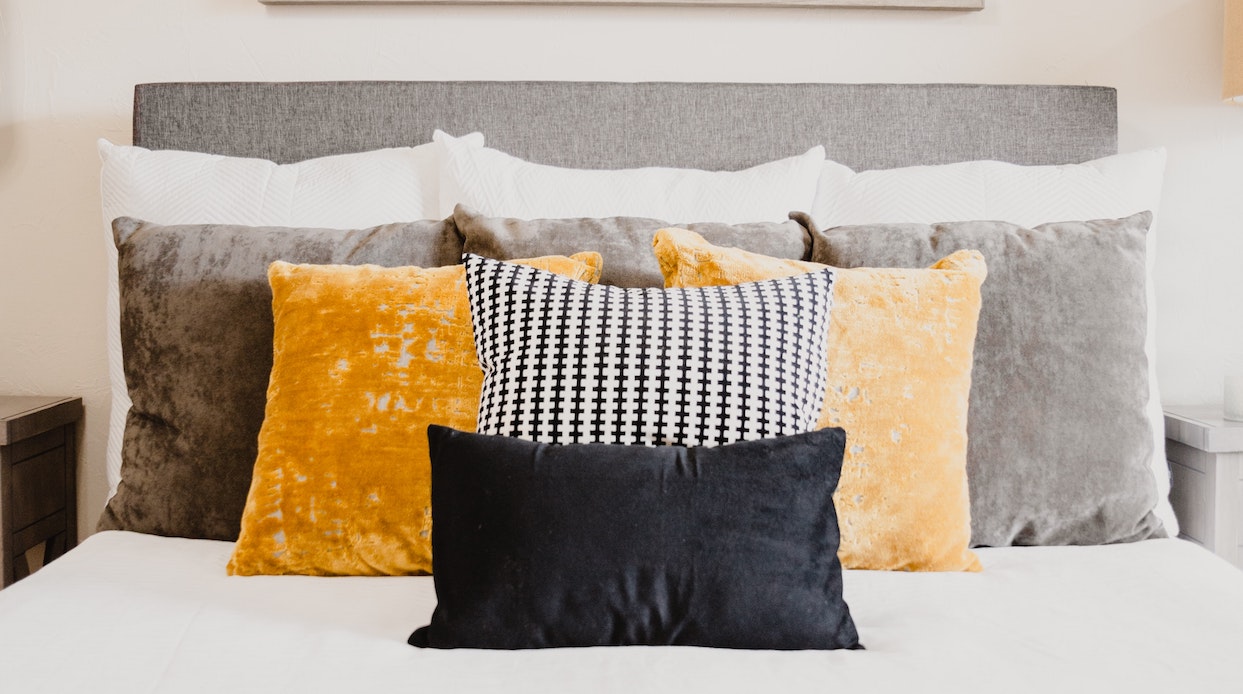