A Judith Chafee Masterpiece in Tucson Continues to Shine

By Christopher Domin and Kathryn McGuire | Photography by Bill Timmerman

The eastern portion of the home protrudes from a granite hillock over the sloped terrain of Tucson’s Santa Catalina foothills. Architect Judith Chafee used concrete columns to support the structure without disturbing the pristine site.

Sometimes a building stands with such strength and timeless presence that it causes passersby to want to know more. Pioneering Arizona architect Judith Chafee’s work elicits that reaction. Renowned architectural critic William J.R. Curtis once said, “To realize her house designs, Chafee needed clients who were willing to take some aesthetic risks as her work departed dramatically from the pueblo revival-style dwellings that often were built in and around Tucson.”

The Santa Catalina mountain range establishes the northern boundary of the valley that contains Arizona’s second-largest city. The rolling foothills provide a luxurious array of vegetation, including splendid saguaros and stiletto lines of ocotillo, ironwood, palo verde and mesquite trees, shrubs, multicolored wildflowers and ground-covering prickly pear cactus. At the top of the piedmont is the Rieveschl Residence, which Curtis referred to as “the grandest of Chafee’s realizations, a large compound of interlocking concrete frames and horizontal platforms jutting from the hillside and affording spectacular views in all directions.” The dwelling looks out toward the mountains to the north, protected canyons and remote ridges to the east, and the nighttime sea of city lights to the south. It was built in 1988 for Dr. George Rieveschl, a renowned chemist and inventor of the antihistamine diphenhydramine, and his wife, Joan. The couple, serious art collectors who spent their winters in Tucson, wanted a compatible and “substantial modern house.” They met Chafee after she did an extensive renovation on the home of friends, and they admired her handling of natural light and the high level of material sophistication in her work.

The living area and intimate “coyote den” are anchored by a stacked-stone wall and fireplace formed of stones gathered from the building site. The feature is reminiscent of ancient native ruins.

The entry offers a choice of directions. Concrete stairs lead to the guest suite to the west or a large studio to the north. The standing-seam wall covering system of terne-plate stainless steel is used inside and out. Chafee called it the home’s “pinstripe suit.”

When considering placement of the 7,200-square-foot one-bedroom house—complete with 2,640 square feet of balconies and porches—in its pristine desert site, with a sloped terrain that ranges from a moderate workable incline on part of the west side to a steep canyon on the east, the architect determined that cantilevered platforms would be disruptive and costly. Drawing inspiration from master concrete designers such as Le Corbusier, she carefully positioned supporting concrete columns that are integrated into the dynamic ecosystem.

Chafee established a sequential journey to and through the site and building. A serpentine drive winds through the hill to an enclosed auto court. The central entry is an intricate juxtaposition of concrete steps and landings that are revealed in stages of consciously paced experiences, a reflection of Buddhist temples Chafee had visited in China. Two passageways, parallel but at different levels, lead to the east. The lower offers utilitarian access into the gleaming kitchen, while the upper hall features a series of stairways that lead to a sublime art gallery’s grand corridor, which traverses through a natural saddle formed by the mountainside and granite hillock and establishes the home’s horizontal spinal column. Natural light is reflected on the ceiling from high, narrow windows that increase in size as the landscape level lowers. Double interior clerestories carry illumination through the spaces from the north and south windows.

The gallery corridor opens to the master suite as it transitions between levels into the library space and the naturally lit living areas, which are defined by a formation of masonry work using colorful rocks gathered from the site. The dominant stone configuration includes a small fireplace and a low back wall that cocoons the “coyote den,” an intimate room-within-a-room on the main living level that provides front-row seating for dramatic summer lightning shows and rainstorms moving across the valley floor.

The main glass-enveloped living areas are bound on two sides by lower concrete terraces that hover over the site and offer cool breezes and seasonal experiences of sun and shade. This patio on the south side of the home overlooks the twinkling lights of Tucson.

Chafee wanted the mortar to appear almost invisible, as if the stones were simply dry-stacked in place. Her design was derived from the numerous pueblos and archaeological sites she observed during her youth in Tucson and while traveling with her family throughout the Southwest. She gathered books from her personal library about local desert ruins to show the masons how the coursing should be laid and worked with them to scoop out mortar until it was recessed enough to appear almost invisible, providing a semblance of stacked rocks. Stainless-steel-encased chimney flues reflect the verticality of the home’s concrete columns and metal glass frames as well as their modern functional image.

A view from the hillock that bisects the home showcases Chafee’s masterful use of concrete, glass and steel. In the center of the open living space are the 11-foot-high freestanding pantries and prep areas of the kitchen.

A covered walkway leads from the garage to the main entry on the west side of the house.

Current owners Sandra Helton and Norman Edelson purchased the house in 2007. They loved the feel of the space as soon as they walked in. It was exactly what the professional Chicago couple wanted—clean lines, authentic materials, sensational views in every direction and an interior that was special in both place and character.

Christopher Domin, an associate professor of architecture at the University of Arizona, and Kathryn McGuire, a Tucson architect, are the authors of “Powerhouse: The Life and Work of Judith Chafee” (Princeton Architectural Press).

Arizona has been home to numerous influential architects throughout the years, from such legends as Frank Lloyd Wright and Mary Colter to modernists Al Beadle, Benny Gonzales and Ralph Haver. One of the most innovative, however, remains less known, although her work has been widely honored.

Born in Chicago in 1932, Judith Chafee moved to Tucson as a young child. Her formal education would take her to the East Coast, first to Bennington College in Vermont and then Yale, where she graduated with a master’s degree in architecture, the only woman in her class.

A pioneer in the male-dominated field, she kicked off her career working for some of the era’s preeminent modernists, including Eero Saarinen, Paul Rudolph and Edward Larrabee Barnes, as well as with The Architect’s Collective, founded by Walter Gropius. Her first independent commission, the Ruth Merrill House in

Connecticut, was lauded on the cover of Architectural Record magazine, the first time such a prestigious honor had been given to a female architect.

Despite Chafee’s growing prestige on the East Coast, the desert, a place she called a “region of the mindful heart,” would call her home. In 1970, at the height of her career, she returned to Tucson, where she focused her design on residential buildings that showcased deep connections to the landscape. She once told a reporter for the Arizona Star, “My perception of what should be built in the desert stems from having grown up in the desert.”

While the Rieveschl Residence, featured on these pages, was one of her largest designs, Chafee’s most significant work is the historic 1975 Ramada House, which references traditional Tohono O’odham shelters .

Chafee continued creating until she passed away in 1998. —Rebecca L. Rhoades 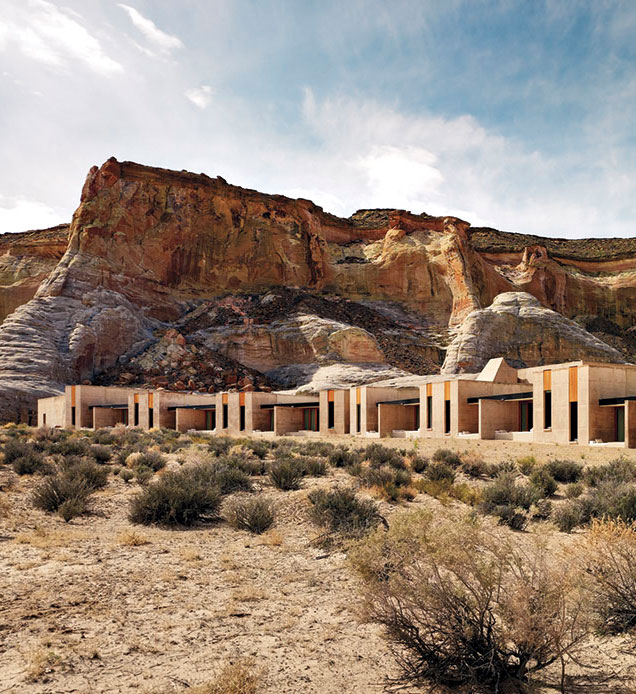 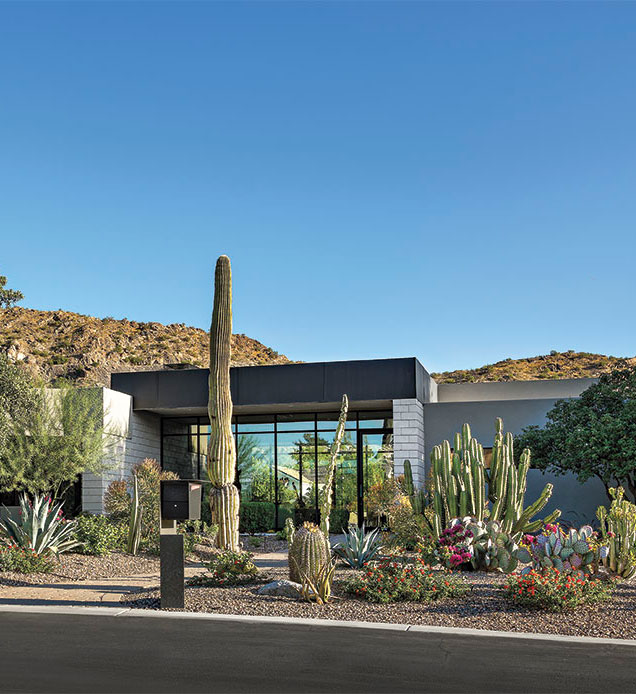 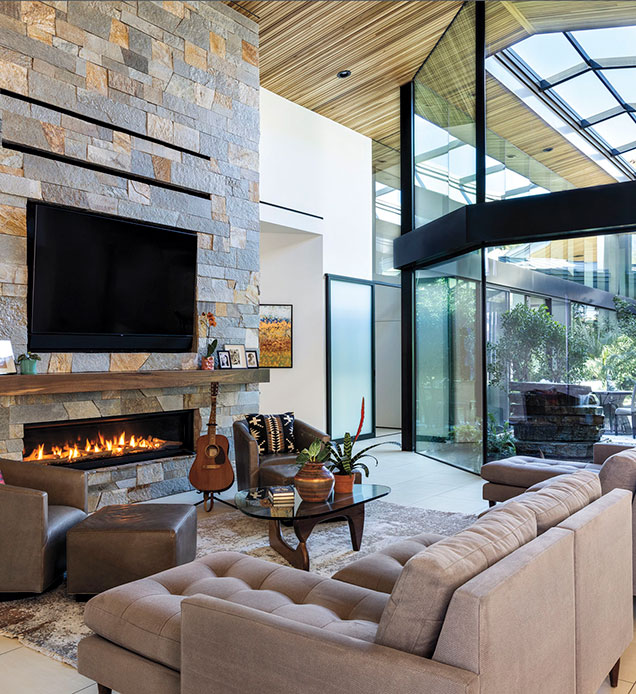