A Garden for Gathering

A lush, layered landscape sets the perfect stage for a welcoming family retreat.

By Lori A. Johnson | Photography by Michael Woodall

If it weren’t for the majestic views of Camelback Mountain providing a dramatic backdrop to the Mediterranean-inspired garden, complete with a colorful mosaic of flowering trees, vines and shrubs, you might imagine you had stepped out of an authentic Italian villa in the heart of Tuscany. Contrast the sumptuously flourishing foliage with the inherently structural properties of more familiar Sonoran Desert natives, such as agaves, cacti and various succulents, and reality grounds you squarely back in Paradise Valley.

Rustic Mediterranean meets desert Southwest was exactly what Sharon and Tom Zollo were aiming for when they decided to build their retirement home in Arizona. For almost two decades, the couple, both lawyers in Chicago, had been spending the winters near Anthem, but they longed for a place where they could live closer to their favorite cultural activities, enjoy the magnificent mountain views and create a welcoming, informal space for entertaining.

“I’m a bit of a home magazine junkie, so I had a pretty good idea of what we wanted,” Sharon says. “We travel to Italy at least once a year and also visit other spots in southern France and Spain, so we were looking for something more rustic but not as dark as what has been referred to as Tuscan. The interior and exterior palettes of the house are pretty light.”

“Pottery adds another layer and dimension to any garden.”

In order to accommodate a large number of guests and activities, maintaining a comfortable flow from indoor to outdoor spaces was key to the overall design. It’s a feeling you notice as soon as you approach the dwelling. “As you enter the front courtyard, a water feature leads you to the entry door and a ‘see-through’ foyer. Your attention is then drawn to a second water feature in the backyard before moving on to the pool,” explains architect Gary Wyant. “The entry courtyard also provides an outdoor extension to the formal dining room as well as a private seating area for the guest suites.” A large patio connects the great room to the pool through pathways and landscaped vignettes and the game room to a nearby sport court. A covered deck on the second level is perfectly situated for gazing at sunsets and Camelback Mountain.

“It was important that our house offers a selection of little patios and ramadas,” says Sharon. “We wanted our guests to have private areas where they could hang out in the garden. The main area between the back of house and the pool are in use constantly. Except for the hottest days of the year, someone is almost always sitting on the covered patio.”

Mediterranean-style gardens, developed by landscape designer Jeremy McVicars and project manager Ryan Sawdey, complement the architecture and create a cohesive vibe indoors and out. The pair were careful to maintain the views of Camelback Mountain by limiting the height of the plantings along the rear fence; keeping taller trees along the side of the property also maintains privacy from the neighbors. A profusion of pink and white oleanders add large swathes of color along the fence line.

“There are also two raised beds, and the flowers are changed out every six months, which allows us to update the vibe frequently,” McVicars notes. A number of plant-filled containers in hardscaped areas add finishing touches with their bright blooms. “Pottery adds another layer and dimension to any garden,” he adds.

1. Mature desert-friendly specimens, including palo verde trees, a variety of agaves, and golden barrel, prickly pear and Mexican fence post cacti, welcome guests at the front entry. 2. A custom carved stone water feature draws the eye to a glass-enclosed foyer, through which visitors can catch a glimpse of a second water feature and the pool. 3. The entry courtyard, complete with a fireplace and shaded by lush greenery, offers a private spot for guests to relax and enjoy a nightcap on a cool autumn evening. Reclaimed Chicago brick paving pays homage to the homeowners’ Midwestern roots.

“The aged concrete vessels that flank the corners of the pool for balance contain olive trees and flowers that embrace the European architecture. The pots near the entry gate feature twisted juniper, which again follow the style of the home.”

In the front yard, a variety of specimen-sized natives, including palo verde trees (Cercidium hybrid ‘Desert Museum’), several types of agave, and a number of cactus species, such as golden barrel, bunny ears prickly pear (Opuntia microdasys) and Mexican fence post (Stenocereus marginatus) harmonize with the surrounding Sonoran setting. More native flora is found in the backyard, as is a special desire of the homeowners. “We did have one other request, which was citrus, so the landscaper gave us a bit of an orchard,” says Sharon. “We have eight citrus trees—two each of lime, lemon, orange and grapefruit. We added a fig tree last year at Tom’s insistence.”

“We wanted our guests to have private areas where they could hang out in the garden. ”

Above clockwise from top left A walkway on the eastern side of the property leads from the driveway to the rear of the home. The gate is flanked by two potted kumquat trees. • A stone fountain is a refreshing surprise in a far corner of the backyard. White oleander and mature lemon trees surround the setting, creating a sense of intimacy and solitude. • Guests look out of the foyer and onto a long, rectangular water feature. Dwarf olives (Olea europaea ‘Montra’) line the alcove, while snail vine (Visna caracalla) soften the stone walls. • One of two raised beds tucked between the house and the pool is filled with colorful blooms that are changed out every six months, giving the garden a fresh look.

Walkways of pea gravel and reclaimed Chicago brick, a nod to the couple’s hometown, meander throughout the property. For Sharon, the paths are one of the most satisfying aspects of the landscape. “We’ve lived here for two winters, and each year we’ve had someone staying with us who was recovering from an illness. It’s been wonderful to have the garden as a spot where folks can just wander and de-stress a bit,” she explains. “I love taking a cup of coffee and just strolling around the garden with the dog in the morning. There is so much variety in the plants and trees, so it’s always interesting to see what’s in bloom and how the landscape is maturing.”

1. The rectangular pool features a built-in spa and baja shelf on its eastern end. The ledge loungers have proven to be very popular with guests. 2. According to architect Gary Wyant, there were two main objectives for the home’s design: One was to capture and preserve the views of Camelback Mountain. The other was to create a family retreat with outdoor spaces that could accommodate a large number of guests. Mass plantings of dwarf olives, white iceberg roses (Floribunda rosa ‘White’), trailing rosemary (Rosemarinus spp), bush morning glory (Convolvulus cneorum) and powis castle wormwood (Artemisia ‘Powis Castle’) border the pool area. 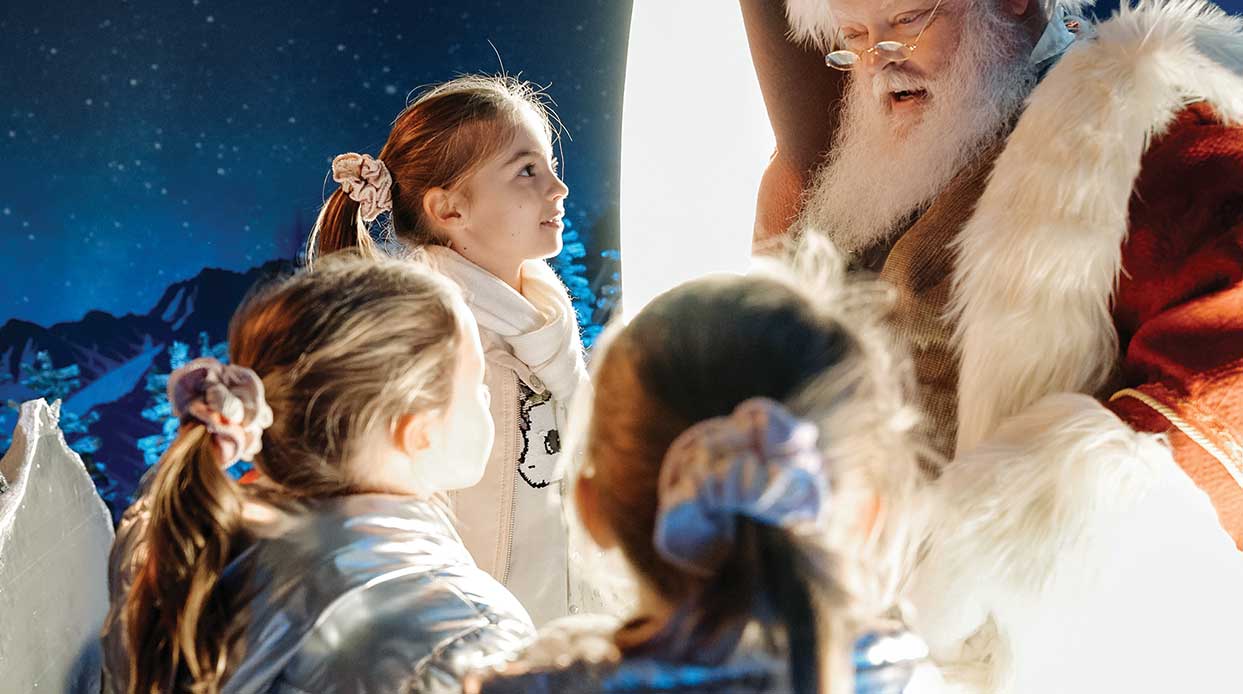 The Main Events in the Valley During Thanksgiving Week 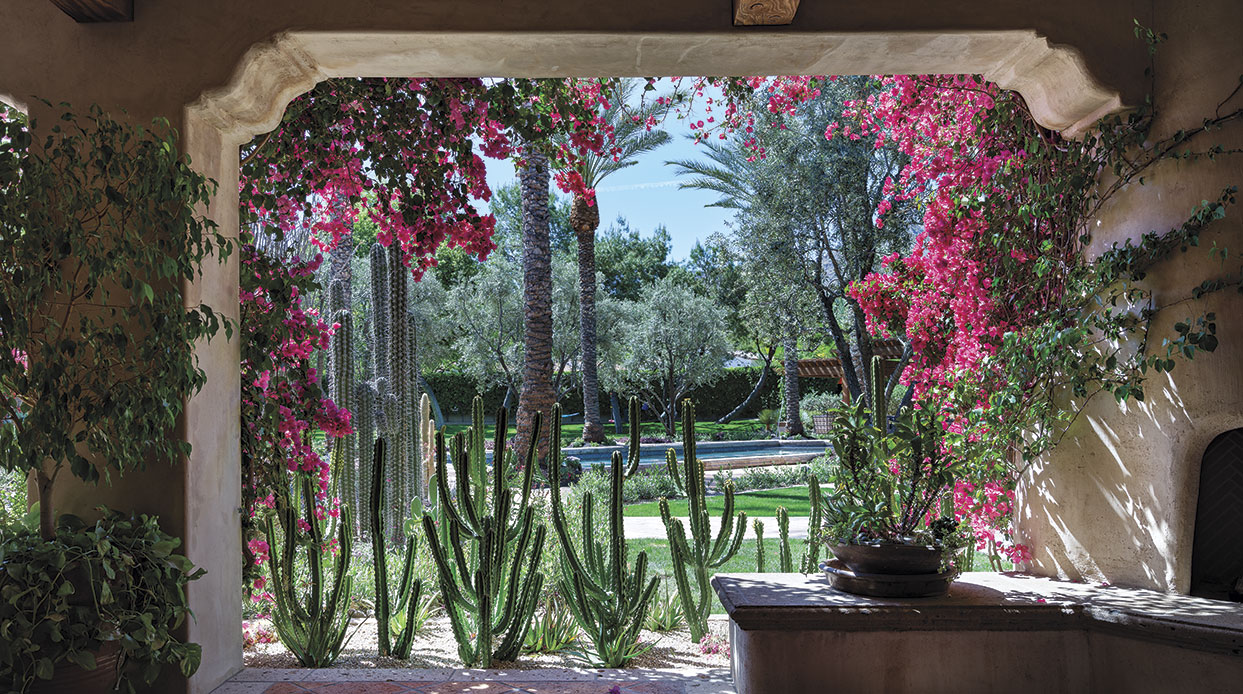 Garden of the Year: This Paradise Valley Home’s Landscape is Both Lush and Sustainable 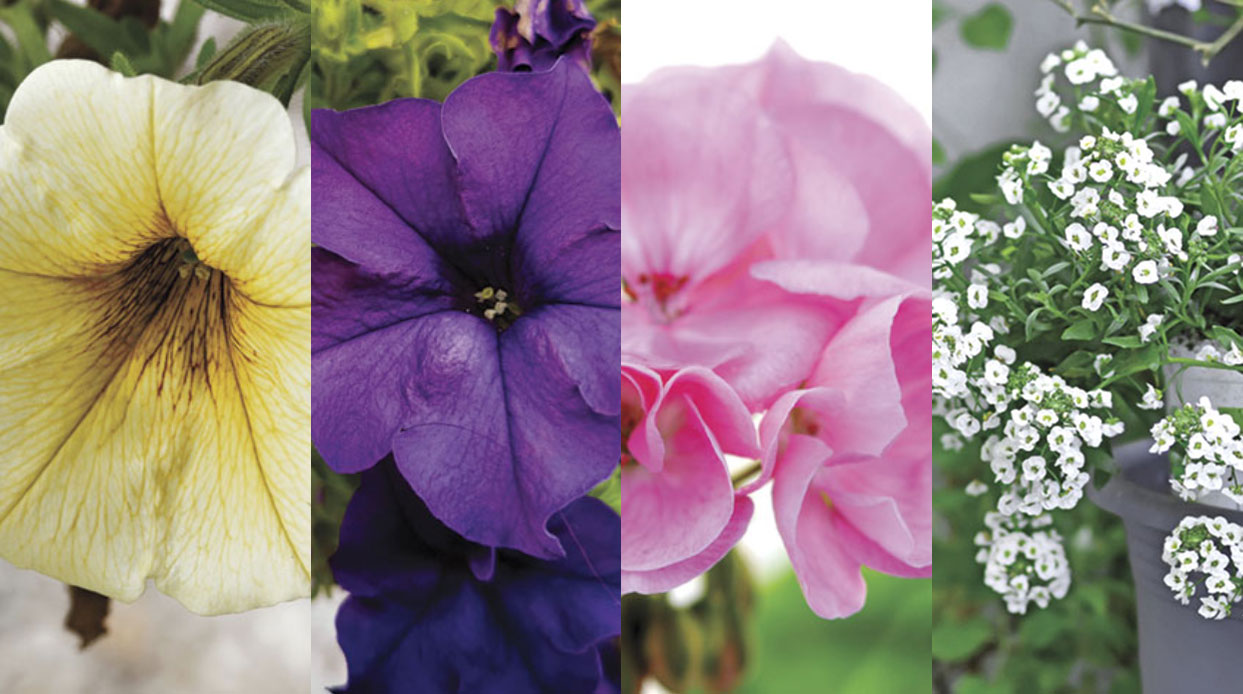 4 Fall-Friendly Florals to Brighten Up Your Landscape