Try This Breakfast Staple with a Southwestern Twist 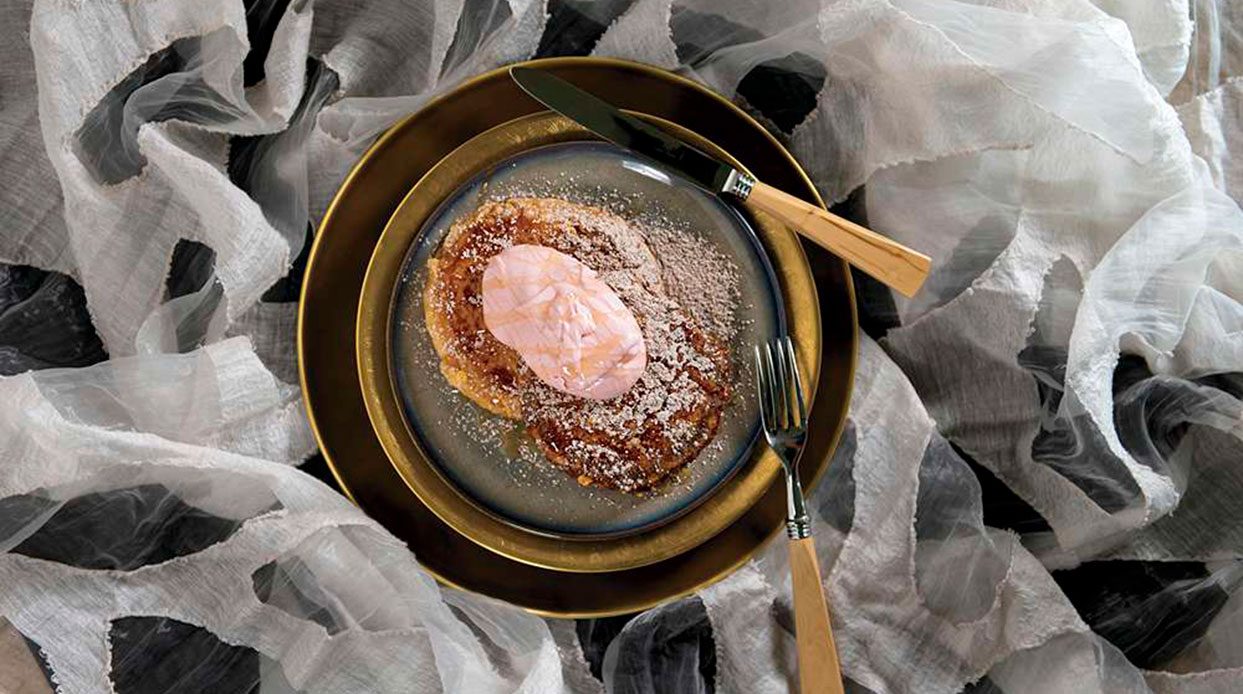 Give classic French toast a regional spin with surprising notes of spice and layers of flavor.

“Pain perdu” in France, eggy bread in England, Bombay toast in India: What we know as French toast is a favorite the world over. Who can resist warm slices of custard-soaked bread fried in butter to golden-brown perfection, dusted in powdered sugar and drizzled with syrup?

Chef Steven Fowler of True Food Kitchen remembers French toast as a Sunday breakfast treat while growing up on his family’s ranch in Maricopa. “Weekdays were busy with school, swim practice and feeding the animals,” he recalls. “Saturday was spent on chores and mucking the pens, but Sunday mornings were when my mom had time to make us a hot breakfast.”

Fowler parlays childhood nostalgia into his own grownup take with a sweet and savory Southwestern spin. He begins with “conchas,” Mexico’s most famous “pan dulce,” or sweet bread. The concha (Spanish for shell) is an egg-enriched yeast roll or “pan de huevo” that draws its name from its shape and sugar-etched seashell decoration. Once confined to Mexican mercados and spice-scented bakeries or “panaderias,” this popular pastry can now be found in many neighborhood supermarkets.

Fowler starts with trimming the top and bottom to create even slices of bread. Next, the pieces are immersed in a milky bath sweetened with agave nectar and perfumed with vanilla.  An unexpected savory note is added with the gentle kick of chipotle pepper’s smoky heat and a sweet and crunchy crust of dried corn for flavor and texture. Finally, this indulgent masterpiece is crowned with a dollop of tangy whipped goat cheese laced with cactus fruit puree and finished with cinnamon sugar and locally sourced mesquite honey.

“I wanted to showcase our Southwestern flavors,” says Fowler, “and introduce people to ingredients they might not normally use.” His uniquely Sonoran Desert-style French toast is just as delicious for dinner as it is for breakfast.

For best results, Fowler suggests day-old bread, which soaks up the creamy egg batter without becoming overly soggy. Smaller conchas will yield one slice of bread, while taller loaves will yield two. Look for semifirm goat cheese sold as logs (tubs of soft, fresh chevre won’t whip up as fluffy), prickly pear puree in the specialty food aisle, and vacuum-packed bags of freeze-dried corn in the produce or dried-fruit section of your local grocery store.

In a mixing bowl, whisk together cinnamon and powdered sugar until combined. Transfer the mixture into a spice shaker.

Pour all ingredients into a container large enough to dip the bread into and whisk until smooth. This can be done 24 hours in advance; re-whisk before using.

Simmer prickly pear puree in a small saucepan over medium heat until reduced to ½ cup, about 30 minutes. Transfer to a container and allow to cool in the refrigerator. Meanwhile, using a mixer with the paddle attachment, blend goat cheese, cream cheese and powdered sugar until smooth, about 3 to 5 minutes. Remove the paddle and switch to the whisk attachment. Add 2 tablespoons of the prickly pear reduction and whip for 30 seconds on medium-high until combined. If using a hand mixer, beat cream cheese, goat cheese and powdered sugar together. Drizzle in 2 tablespoons of prickly pear reduction until the mixture is smooth and combined.

4-8 conchas, depending on size
and thickness

In a food processor, pulse the corn to a rough chop, or the consistency of flaked oatmeal. Transfer to a plate large enough to crust the concha bread.

Preheat an electric skillet to 325 degrees. If using a stovetop skillet, heat over medium-high heat.

Slicing horizontally, remove the top and bottom of the concha bread, leaving a portion approximately 0.75″ thick. If concha is thick, cut in half horizontally to make two pieces. Soak each piece of bread in batter for 45 seconds to 1 minute on each side. Dredge both sides in freeze-dried corn. Repeat, dipping bread back into custard for another 10 seconds on each side and then coating in crushed corn. Add butter to skillet and, when melted, cook each slice until golden-brown on each side. Note: If you prefer firmer French toast, preheat oven to 375 degrees and bake for 5 minutes after removing from the skillet.

Place two slices of French toast on each plate and sprinkle with cinnamon sugar. Top with prickly pear goat cheese and drizzle with warm mesquite honey. 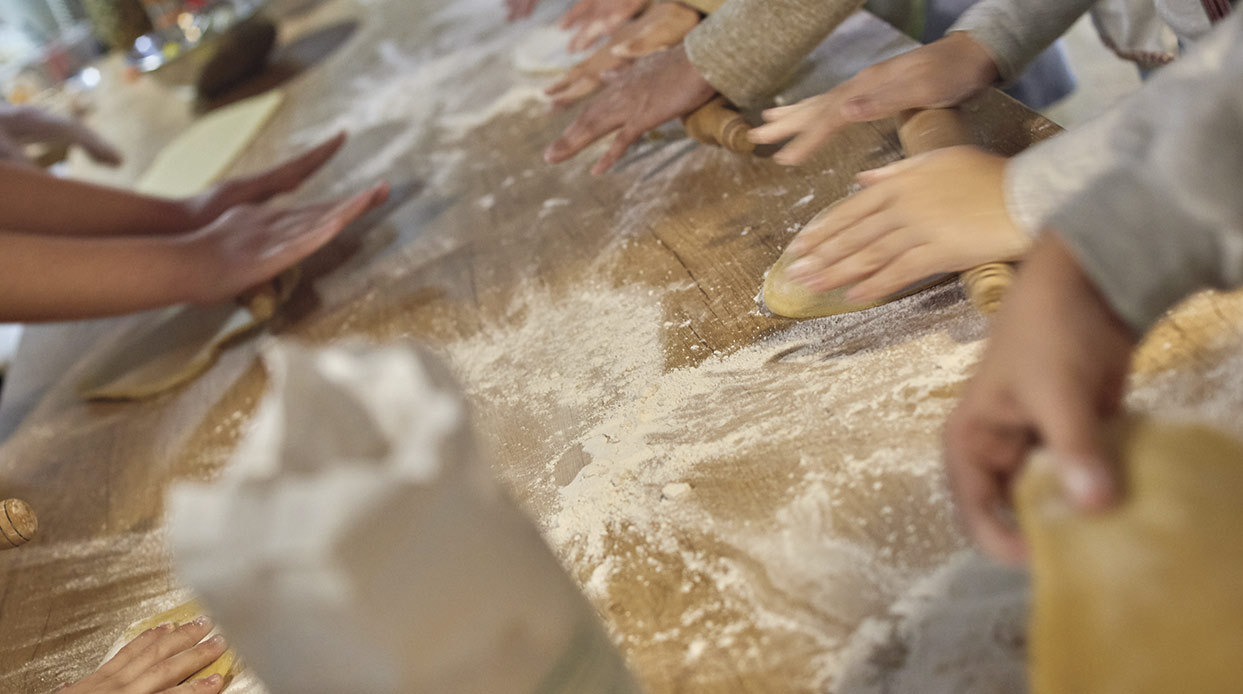 8 Local Cooking Classes That Will Unleash Your Inner Chef 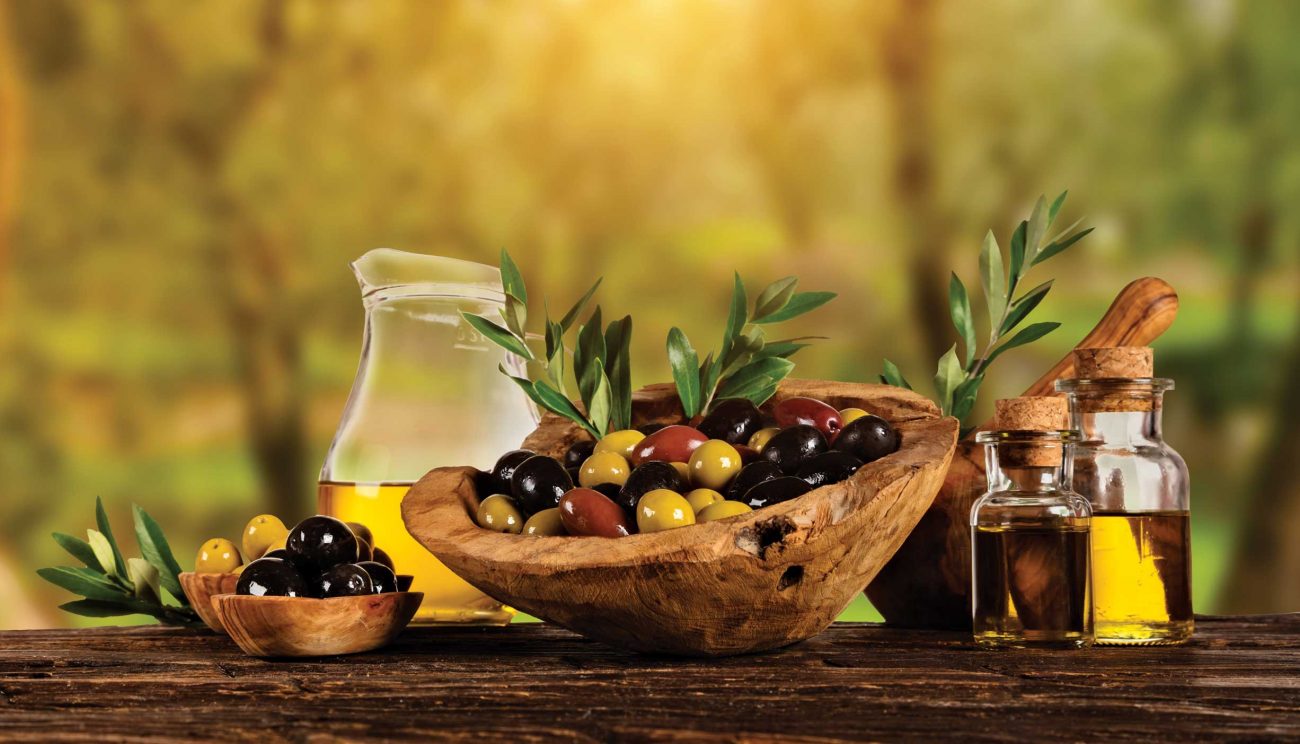 How to Make Oil-Cured Olives