Master Made in Arizona serves up a glimpse into Tucson-based dishware manufacturer HF Coors.

It’s a typical weekday, and the shop floor at HF Coors is abuzz with activity. At the southern end of the factory line, a young employee operates a Unimatic jiggering machine, which makes plates and bowls. He adds a thick disk, or bat, of clay to a mold and places it on the rotating machine, which can hold five molds at a time. The mold is lifted up to a revolving roller, which spreads the clay into the mold and hollows out the bowl. As the roller spins, long curlicues of excess clay are expelled into a large container to be recycled.

When the shaping is complete, the worker removes the mold and places it on a series of shelves that slowly revolve like a Ferris wheel through a dryer and harden the clay in preparation for finishing, glazing and firing. The process repeats itself about every 10 seconds.

Further along the line, another mold is being used at a ram press to create a dual-chamber bowl. Two logs of clay are set in the hydraulic machine, which sandwiches downward with several tons of force, literally “pressing” the clay against the mold. Extraneous material, squishing outwards like a ball of mud being squeezed between fingers, is deftly pulled off by the employee. With a hiss of compressed air, the newly formed bowl is released from the machine.

Nearby, a team of staffers glazes rows upon rows of mugs. Working in unison, each has his or her own task: removing mugs from the drying rack, glazing the inside of the mug, glazing the exterior, inspecting the final product and placing the mugs on shelves headed to the kiln. Again and again and again. The team finishes 7,000 mugs per shift.

It’s a hypnotizing process. Repetitive shapes moving quickly down conveyor belts and stacked on shelves 6-feet-high. Two to three tons of clay per day are transformed into beautiful, long-lasting dishware that can be found at some of the country’s top restaurants—as well as in discerning homes throughout Arizona.

HF Coors was founded in 1925 by Herman Frederick Coors, youngest child of beer magnate—yes, “that” Coors—Adolph Coors. In addition to his brewery, Adolph operated the Coors Porcelain Co. During World War I, the plant supplied the U.S. government and various manufacturing industries with chemical porcelain, and the product helped keep the brewery afloat during prohibition.

When Herman’s older brother was tapped to take over the beer business, the younger Coors decided to go to Southern California, where he hoped to develop a factory that would make hotel china. In 1925, after months of research, he opened what was then called HF Coors China Company Inc., in Inglewood. Passing through several hands over the following years, it remained in its location near Los Angeles International Airport—until it was purchased by Dirck Schou.

Tucson native, West Point graduate and Vietnam veteran, Schou had previously owned and operated a ceramics company in England that made dinnerware, crockpot inserts, cookie jars and other items. In 1990, he returned to Tucson and, with the help of master potter and Phoenician, David Sounart, started Catalina China, which produced mugs.

“I had known about HF Coors for a long time,” says Schou. “I’d been looking to acquire a pottery factory in the U.S. and hopefully move it to Tucson.” An acquaintance told him in late 2002 that the company was for sale and was going to close down if it didn’t find a buyer. “I didn’t want it to go out of business because it had been around for so many years,” Schou adds.

By the summer of 2003, Schou had crews working in California and Tucson to get ready for the move. “First, we had to buy a building. Then we had to load up all of the machinery and inventory—everything—and bring it here,” he recalls. “It took us 100 semitrailers over the course of two months to do it.” In February 2004, HF Coors fired up its kiln for the first time in its new Arizona home.

Stretching almost 200 feet along the northwestern wall of the 30,000-square-foot factory, the kiln is the heart of HF Coors. Running nonstop Tuesday through Friday—at 2,330 degrees—it turns unfinished ceramics into virtually indestructible dishware that can withstand the abuse of busy restaurants or active households.

A large conveyor belt circles through the kiln, carrying cars stacked high with mugs, bowls and plates. One car—itself made of ceramic to avoid burning—enters every minute, emerging roughly 10 hours later. The kiln can hold 54 cars at a time, with an additional 69 on the exterior track.

“All of our clay bodies and glazes are formulated to work together at the temperature we’ve chosen to fire at,” says Sounart. “If the glazes don’t match the body, you can get defects, such as crazing—or worse, shivering.” Materials expand and contract when heated, so as a plate expands and contracts, so must its glaze. Crazing is fine crackled lines in the glaze; shivering is when the glaze chips or pops off the clay body. According to Sounart, HF Coors tests its dishes repeatedly by heating the items in an oven to 475 degrees and then dropping them in 69-degree water. “A vitrified product made correctly should never craze,” he says.

“Our products are what is known as ‘vitreous,’ meaning they won’t absorb any water,” Sounart explains. “Even the exposed foot —the part of the pottery that touches the counter— won’t absorb anything. We polish the foot, but it doesn’t have any glaze when it goes into the kiln so it doesn’t stick to the car shelf. That’s a big factor when it comes to being high-quality, chip-resistant and strong.”

1. HF Coors manufactures its own clay and glazes using only U.S. ingredients. 2. The kiln is the heart of the business. Here, a car—itself made of ceramic to avoid burning—exits the kiln. It takes roughly 10 hours inside the 2,330-degree furnace for the dishware to be properly fired. 3. A mug moves through a waterfall of glaze, which coats its exterior. Once fired, the glaze will turn black. 4. Schou and his team proudly promote the fact that their products are “Made in the USA,” as stamped on the bottom of this mug. 5. Glazed mugs, ready for firing, make their way down a conveyor belt.

“The skills that people have here—you can’t find them anymore.”

Matt Pool is a big proponent of HF Coors’ dinnerware. “Whenever I would travel to California, I would always check out the plates in the restaurants where I ate,” says the owner of Matt’s Big Breakfast, with four locations throughout the Valley. “I would turn them over, and they would always read, ‘HF Coors, Tucson.’”

Pool has been using HF Coors dishware at his Biltmore Plaza and Tempe locales for a number of years. “Quality is the biggest thing we look for. Breakfast restaurants are usually very crazy—it’s busy and plates break from overuse,” he explains. “Our Biltmore location has been open for two and a half years, and we’ve only recently had to reorder anything.” The simple white dishware, subtly branded with his company’s logo, isn’t flashy, but it definitely makes a statement for guests. “It’s heavy, it doesn’t chip, and it’s obviously a high-quality product.”

1. Body shop and kiln supervisor Fernando Santa Cruz shows off one of many filters comprising the large filter press seen behind him. After the clay is mixed into a slurry, it passes through the press—a process that takes about five hours—to remove any impurities. 2-4. A series of images follows a bat of clay through the jiggering machine. The bat and mold are placed in the machine. The mold is raised to meet a revolving roller, which forms the clay into the shape of a bowl. As the machine spins, excess clay is expelled in long strands. The mold is then placed in a dryer where the clay will harden

Other Valley eatery owners agree. The Tucson-made dinnerware can be found at a slew of local hot spots, including North Italia, Blancos Tacos & Tequila, Culinary Dropout, The Arrogant Butcher, Olive & Ivy, Wildflower Bread Co., Westin Kierland Resort—and even as far north as the El Tovar Hotel at the Grand Canyon.

While the restaurant industry drives HF Coors, the company has a retail side that allows homeowners to purchase the same high-quality dishes that are used by their favorite dining establishments—plus a variety of colorful, hand-painted pieces.

In 2007, HF Coors opened a small store at its factory on Cherrybell Stravenue. Here, customers can find dishware in myriad patterns and hues, including such favorites as Sedona, an elegant design inspired by its namesake town and rimmed in turquoise and orange; Acapulco, a vibrant, hand-painted line in playful combinations of crayon colors; and the store’s No. 1 seller, Mimbreño, a historic collection designed in the 1930s by iconic Southwest architect Mary Colter and featuring motifs of the ancient Mimbres people.

Three years later, Schou launched “1st Saturday at the Potter’s Yard.” Offering overstock, seconds and obsolete items at deeply discounted prices, this highly anticipated monthly event brings collectors and first-timers to the store, where lines frequently snake around the large gravel parking lot. “It introduces people to our dishes,” says Schou. “You can’t buy anything like them anywhere else. You can get a painted product that you can use, put in your dishwasher or oven, or eat off of, and it will stay the same forever.

“I think HF Coors is an important part of Tucson, Arizona and the country right now,” he continues. “There are so few of us left who can make these products. Many mass-produced dishes are coming from China. The skills that people have here—you can’t find them anymore. And that’s a big reason our clients are attracted to us.”

As the day pushes on, customers drift in and out of the factory store. Some are visitors looking for that ideal souvenir; others, like a couple from Marana, have made the trip in search of the perfect pottery to complete their table setting. In this case, it’s six matte white pasta bowls. Their joy in finding that just-right piece proves that what our meals are served in is just as important as the food itself. And knowing that your dishes are made in your own backyard adds a soupçon of state pride to every bite.

“We do almost everything with molds, but it’s still considered pottery—just on a larger scale.”

1. Sandra Montez removes freshly colored mugs from the glazing machine. The glaze air-dries quickly, allowing it to be handled almost immediately. 2. Using a wet sponge brush, Reyna Enriquez removes any dust and grains from the clay before it is fired.
1. HF Coors produces mugs for a variety of clients, including the U.S. government, Starbucks and these gift mugs for The Ellen DeGeneres Show. 2. David Sounart demonstrates the use of an ASTM Impact tester, which evaluates the chip resistance of the dishware. 3. Steven Clark carves the shape of a bowl out of plaster. Clark creates what are called “master models,” from which master molds are produced. Secondary molds cast from the master are then used to make the dishware. “I’ve always loved making that first shape that is created from a drawing and turned into a physical reality,” he says. 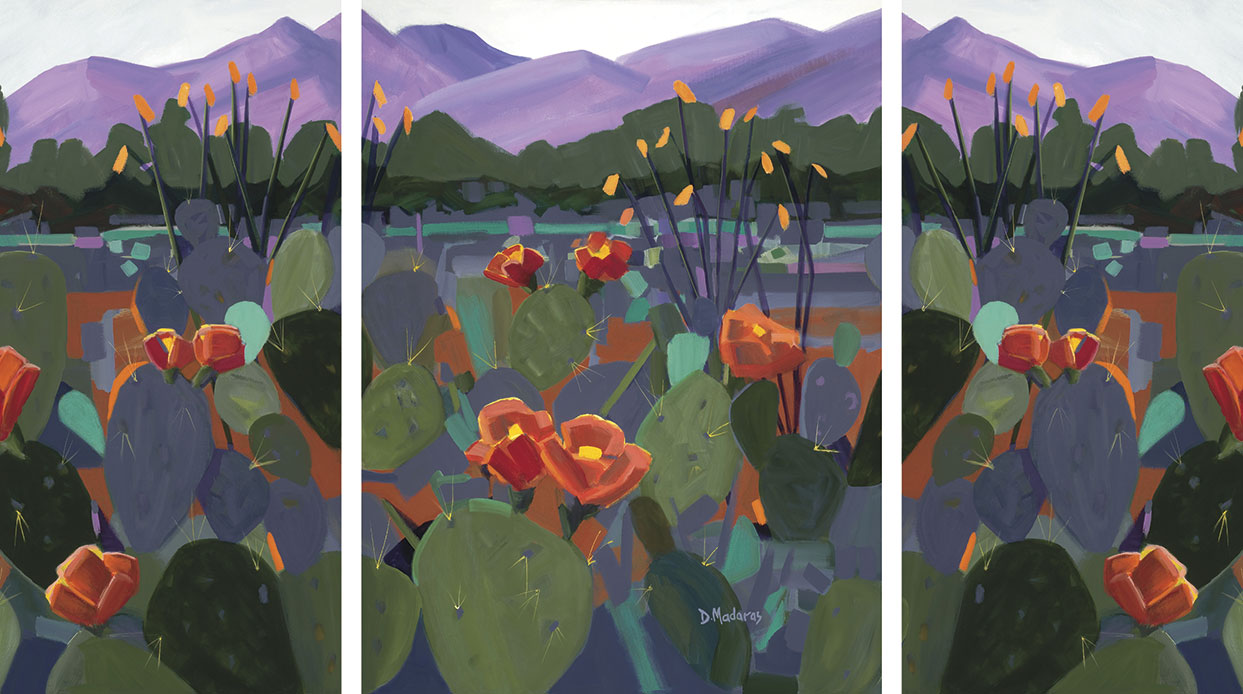 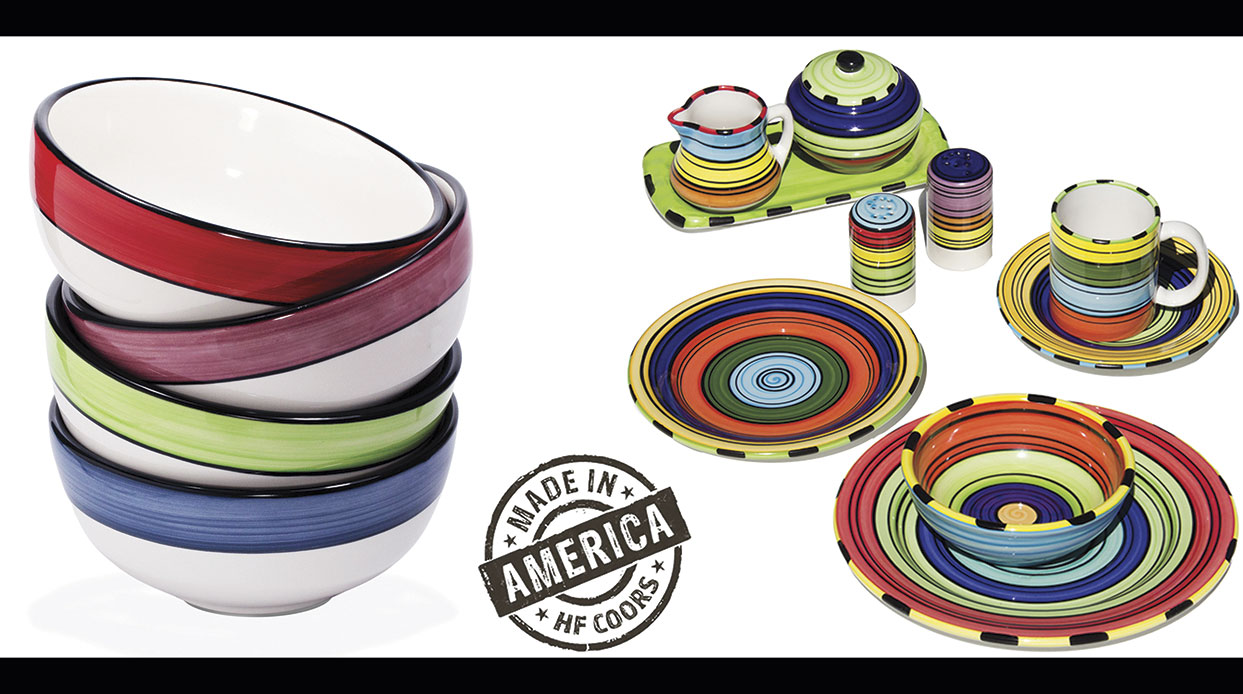 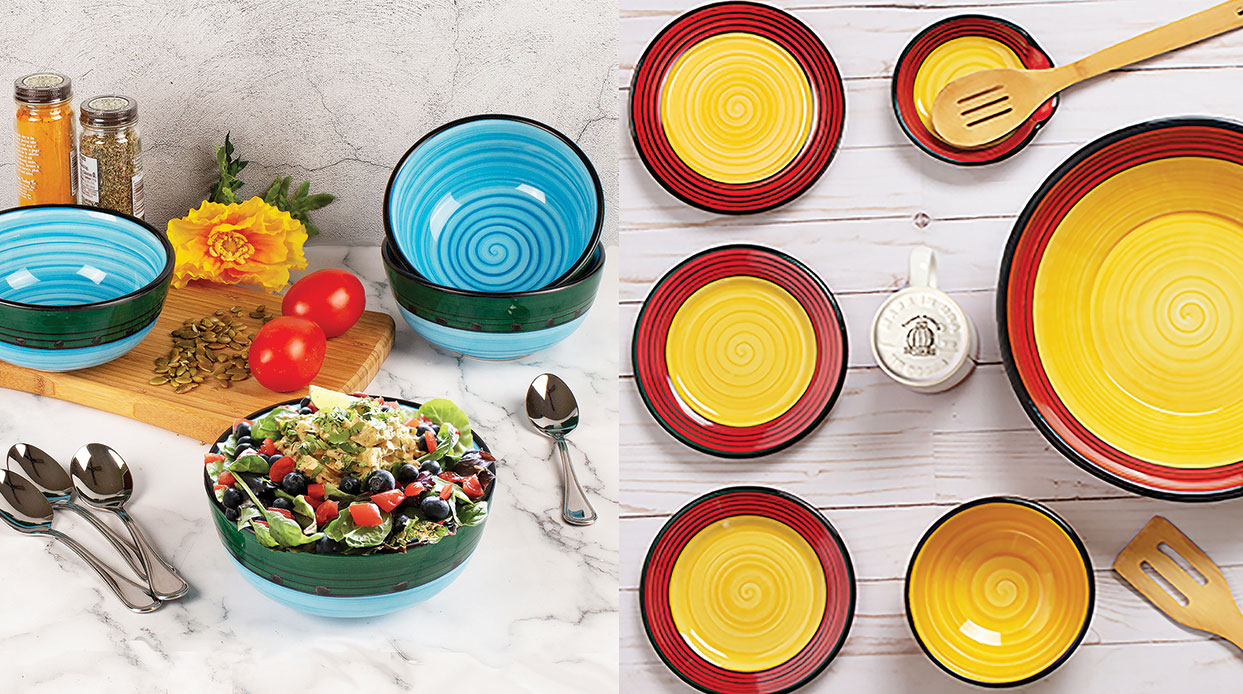