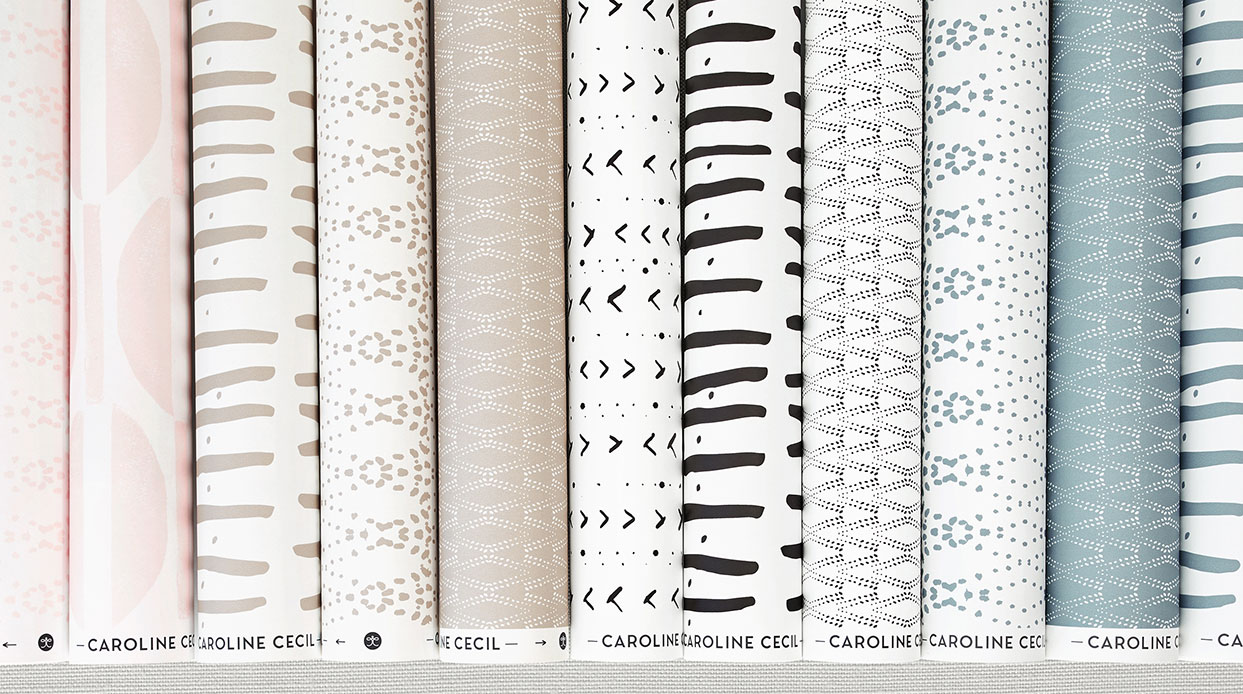 Founded in 2014, the company has exclusively sold textiles until its recent launch into the world of wallcoverings.

“Interior designers have been asking us for wallpaper for years, and I’m so excited to finally bring this collection to market,” says founder and CEO, Caroline Cecil.
According to Cecil, the collection took a year and a half to come to fruition as she wanted to ensure that the final product met the scrupulous expectations of both herself and her clients.
To introduce the line, Cecil developed three new patterns: “Citra,” a dappled geometric design that creates the illusion of movement through a subtle fade; “Varas,” a bold print that embraces the soothing qualities of linear marks; and “Raja,” which originated as a stamp that was carved by Cecil and turned into a repeat pattern for the wall. The company’s popular “Kekut” and “Titik” designs are also included in the collection.

The wallcoverings are rendered in neutral tones of blue, gray and blush allowing them to incorporate seamlessly into any room. In total, 18 print/colorway combinations are available and customizable for both residential and commercial interiors. Personalized color options are also an option upon request.

“The color palette we have is very versatile. It can work effortlessly with the aesthetic of a modern Southwestern home, in addition to a variety of other styles,” Cecil says.

Each handcrafted design seeks to enhance the unique imperfections that give personality to a pattern.

“We work with super traditional designers on the east coast, modern beachy transitional customers in southern California and really everywhere in between. We truly have something for everyone,” says Cecil.

All the company’s products are made in America by small businesses, and the wallcoverings are printed by hand in micro-batches. In addition, the materials and techniques used for the wallpapers are a Forest Stewardship Council-certified eco-friendly choice free of lead, phthalates, petroleum-based fertilizers, pesticides and synthetic products.

Each 8-yard roll is hand-printed on premium heavy matte paper and priced at $480. A sample kit which includes all 18 patterns and color combinations in 8″ by 10″ swatches can also be purchased for $75.