The weather outside may not be frightful, but this Scottsdale home is so delightful.

1. Homeowner Debbie Morse took an unexpected approach to showcasing a Christmas tree in the bathroom: “I have a beautiful concrete tub, so I figured I might as well use it,” she laughs. “It made watering the tree so easy.” 2. Morse placed the living room Christmas tree on the sofa table to add scale and give guests extra space to walk around. The dining table was adorned in soft, elegant golds. 3. The living room Christmas tree towers up to a nook in the vaulted ceiling. 4. “The mossy greens in the living room add a soft, almost botanical feel,” Morse says. “I just wanted to create a feeling of being in the woods, being under the sky and under fresh snow as much as possible.”

Debbie Morse is all for branching out from Christmas tchotchkes. “I don’t have those traditional trees where I have collected my children’s ornaments over the last 20 years,” says the Scottsdale dweller. “I try to base my decorations more around furnishings than nostalgia.”

Decking the halls is quite literally a lifestyle for Morse, who in the late ’70s and early ’80s was one of the only female visual merchandise managers for Sears and later became the general manager of a top-100 garden center. Among her most rewarding responsibilities was curating spectacular holiday displays—at one point as many as 40 to 60 themes per year. “That’s how I fell so in love with it,” she recalls. “I wanted people to walk in and feel like they were transported into a magical wonderland.”

The profession left her with a plethora of ideas—and a rather large collection of Christmas baubles, from ornate and expensive to thrifty finds and dollar-store discoveries. “I love creating a visual appreciation for something unexpected, and with the quantity of decor I have captured and collected, I try to craft a different look each year.”

Every room in her 3,500 square-foot winter retreat has its own theme based on the existing color palette. And trees may not take their typical form—or place. In the living room, for example, a gilded spruce sits atop a sofa table, giving it the appearance of being two stories high. In the bar, Morse untwisted copper tubing to create a coiled conical tree shape that she suspended from the ceiling horizontally with red and white orbs.

Even in the bathrooms, she may transform the tub into a beautiful tree trough or craft a Yuletide timbre out of bath tissue. “Right before COVID, I did a toilet paper tree not knowing we were going to have an issue with supply,” she says, laughing in recollection. “I had a picture from an artist who took these tiny skiers and put them on a toilet paper roll, so it looked like they were skiing down the slope of tissue. I thought, I’ll use that to create something whimsical. As it turned out, people were out of toilet paper and couldn’t buy any, and they started calling me for rolls.”

“I wanted people to walk in and feel like they were transported into a magical wonderland.”

Creating showstopping vignettes not only satisfies her passion for visual composition but also for entertaining, including her two grandchildren and a gaggle of 120 golf girlfriends. “Arizona has a completely different vibe,” says the former Rockford, Illinois, native. “I miss that snowy white Christmas feel, so I just wanted to create that here in the desert.”

As of this photo shoot, it was her last year hosting the ladies, which inspired a little extra zhoosh. “I decided to go out with a bang,” she notes with a smile. “But that is just how I am accustomed to doing things. I’m always trying to capture a bit of that out-of-the-box imagination. It challenges my artistic side.”

As a former visual merchandiser, Debbie Morse knows a thing or two about creating an enchanting Christmas spectacle. We asked the decorating guru how to make a holiday room classy, not kitschy.

Consider color.
Work with the room’s existing decor palette as a basis. “Most people go to the red or the red and green,” she says. “In my house, I tried to create the white-on-white as much as possible or bring colors that were already in the room.”

1. Morse knotted a throw blanket in the master bedroom to not only shorten the length, but also add  visual interest. “When I see something, I try to create as much texture as possible, especially if there’s not a lot of color. And I just thought, ‘Oh, this is interesting and different.’” 2. Office decorations were kept minimal, with a simple garland framing the bookcase.

Open up your tree.
“A lot of people will hang everything on the outside of the tree. I have actually pruned out live ones so I can go in deep with large ornaments and lights.”

Lighting is critical.
“It adds that wintry glow and makes the room feel extra special.”

Think of things differently.
Borrowing on her days of visual merchandising, Morse uses professional displays for inspiration. “I always look for different ways to present a tree aside from just putting it in a stand. I also try to use what I already have around the house as much as possible.”

Choose multifaceted ornaments.
“I only do ornaments that are two-sided,” Morse reveals. “I don’t own anything single-sided—and that’s how I bought for the stores. That way, no matter which angle a tree is viewed at, its jewelry embellishments look beautiful.”

1. Morse incorporated subtle punches of greenery in the living room, which leads out to a cozy seating area on the patio. 2. TThe homeowner pulled apart coiled copper refrigeration tubing to create a cone shape and appended it over the bar with red and silver ornaments to create a whimsical feel. 3. A tree festooned in creamy white and, brown tones aligns with the master bedroom’s neutral palette. 4. The patio gives subtle nods to the holiday while staying cohesive with the existing decor. 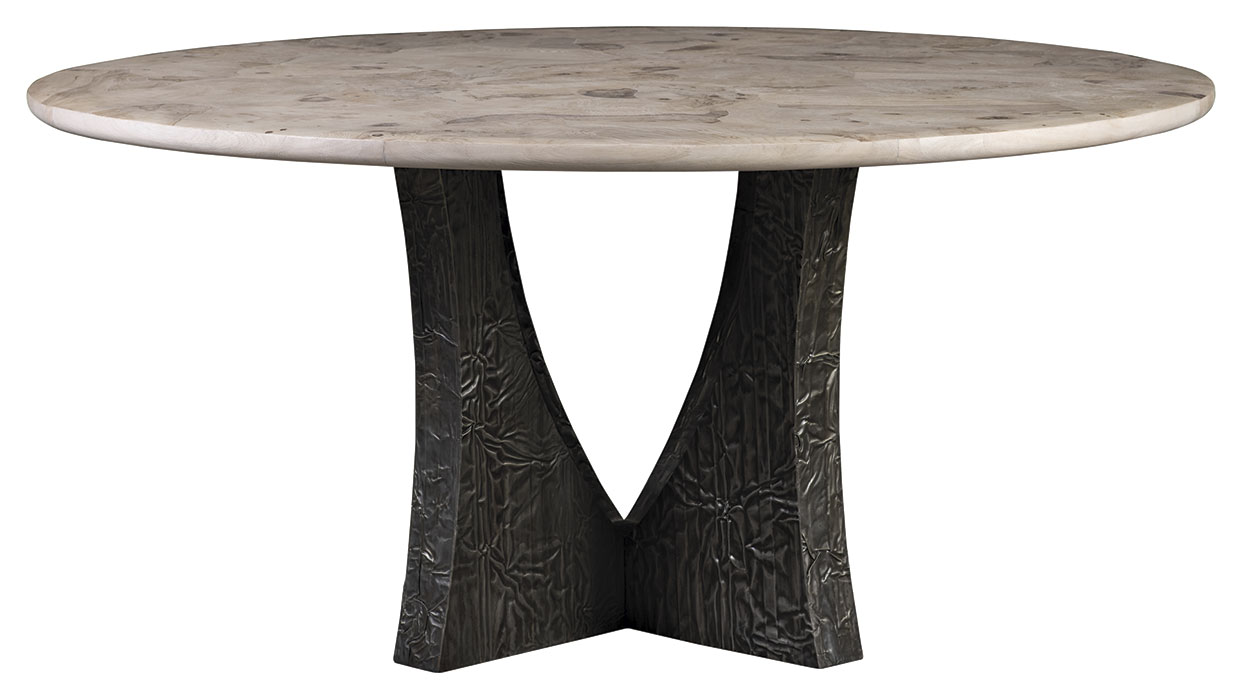 Spanish Modern is Timeless, Chic and Perfect for Southwest Homes 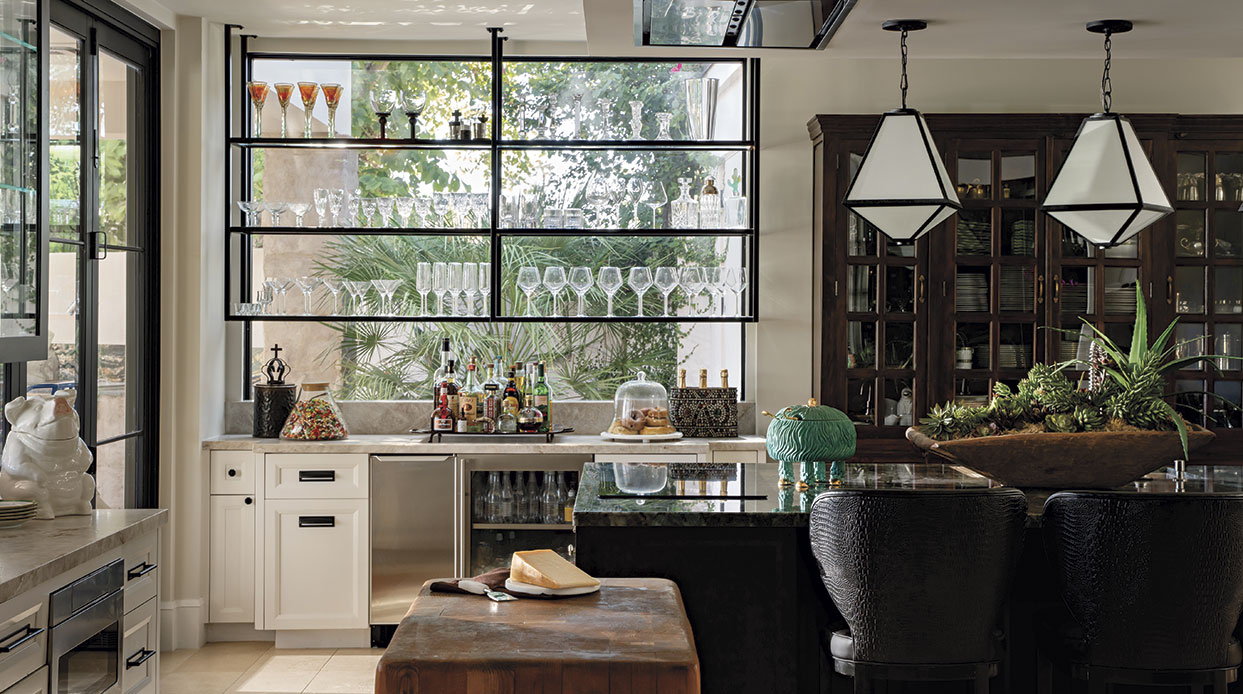 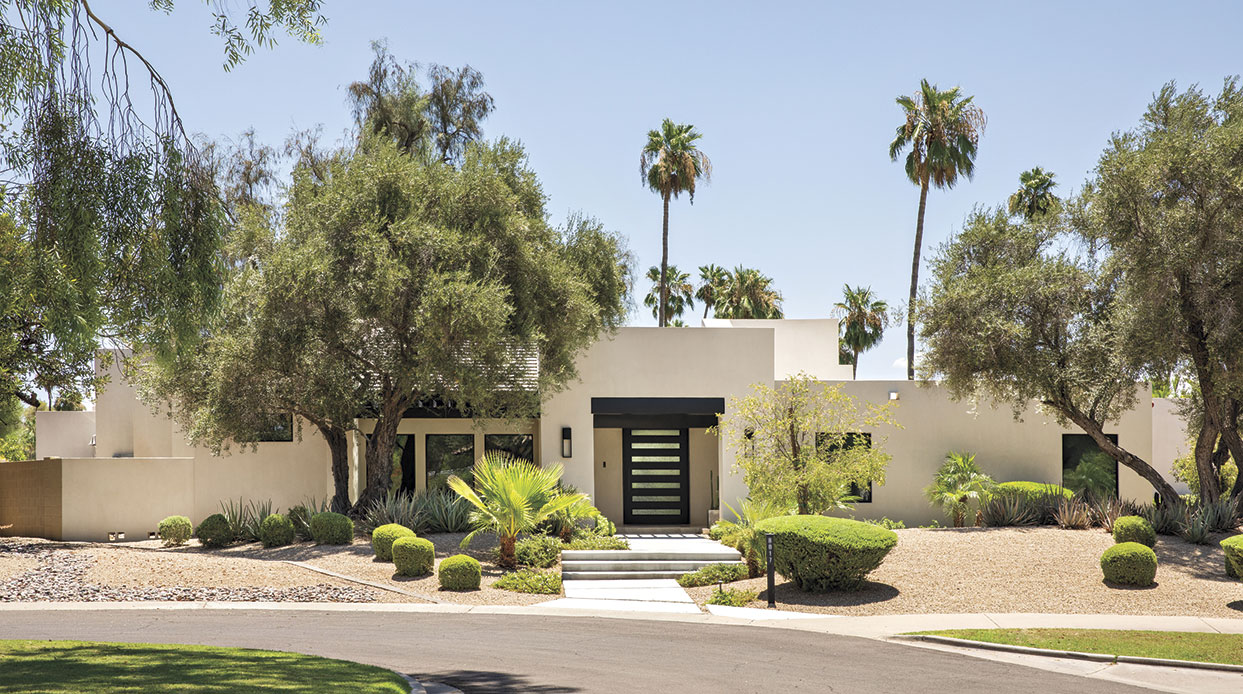