Best of the West

Saddle up and take a ride through one of the nation’s top collections of cowboy artifacts.

A staple of American culture, the cowboy is a national icon—a romantic, rugged metaphor for our country’s frontier past recognized around the world. From tales of real-life heroes and bad boys to Hollywood movies that popularized the Wild West lifestyle, the hard-working, free-thinking cowboy is inseparable from our nation’s history.

“The cowboy reminds me of a period when America talked about manifest destiny—an era when the country was young and growing,” says Mort Fleischer. The retired real estate financier and his wife, Donna, have immersed themselves in the cowboy lifestyle and history. The couple not only owns two expansive ranches—one is an 8,000-acre working Black Angus cattle ranch in Montana; the other a 100-acre horse property on the far edge of North Scottsdale—they also have a collection of Western memorabilia that is unrivaled but for a few museums.

“The Old West was from about from 1865-1885. It’s the era that movies romanticize—a short period when cows were driven north and the landscape was wide open,” Mort explains. “We just love that point in history. We admire the cowboy and the code of the West. The frontier then was pretty much lawless, so they had to develop their own set of rules to live by.”

The Fleischers began collecting Old West materials in the mid-1980s. After Mort “started making a little extra money,” he began pursuing several interests, including art and equines. The couple raised quarter horses, and Donna was a champion cutting rider. They also collected California Impressionist paintings—for a dozen years, they operated the Fleischer Museum, which displayed their extensive collection, in Scottsdale—and it was during an auction for this artwork that Mort learned of a late-1800s saddle that was up for bid. That purchase set the wheels in motion for the now-extensive assemblage that includes approximately 150 saddles, 100 pairs of chaps, 100 pairs of spurs, and numerous holsters, weapons and other cowboy accoutrements.

“We’re art collectors, and we look at this as an art form,” Mort explains. “This material tells a story of the West.”

The lion’s share of their collection is housed at their Scottsdale home, known as “MorDo.” A portmanteau of Mort and Donna, the name is also a double-entendre, notes Mort. “You have to have ‘more dough’ to maintain it,” he says with a laugh. Designed to resemble an Argentinian estancia, the home elegantly showcases all of the couple’s interests.

“The cowboy reminds me of a period when America talked about manifest destiny.”

1. In addition to more contemporary Western memorabilia, the Fleischers also collect Spanish colonial antiquities. This wrought iron spur, circa 1650, known as an “espuela grande,” features pierced metal decorations. 2. A 1947 silver-mounted parade saddle by Frank H. Coenen, a Danish artist who entered the saddle business in California. Known as the “San Fernando” saddle, it was his final masterpiece before his death. It includes more than 40 pounds of sterling silver, weighs 150 pounds and took four years to create. Scenes of cowboy life, rendered in silver repoussé, rest amid a floral and foliate background. 3. A 1990s cased set of Colt Model 1873 second-generation single-action .44-caliber special army revolvers inscribed by master engraver Philip Quigley of Phoenix. The ivory grips feature gold Indian head and horseshoe inlays by Bohlin Co. 4. Former hay storage in the stables has been converted into a museumlike display room for many of the Fleischers’ saddles.

Just off the great room, stored securely behind an early 1900s bank vault door, are dozens of spurs, holsters and revolvers. There’s even a wall of vintage Winchester rifles. Saddles by such legendary makers as Edward H. Bohlin, Frank H. Coenen, Visalia Stock Saddle Co. and Frank A. Meanea line the perimeter of the room. Many drip with silver and gold.

“These are parade saddles,” Mort says. “I look at them as though they’re the West that never was—the West of our imagination.”

He points to an exceptionally stunning example with a silver horn (handle) and cantle (the back of the saddle seat) that is blanketed in silver repoussé designs. Massive silver-plated tapaderos, or covered stirrups, hang almost to the ground. The black leather has been expertly tooled with intricate floral designs. It was made by Bohlin in the late 1940s.

“This is Bohlin as his very best—it’s among the top half-dozen Bohlin saddles in the world,” notes Mort, who adds that it was once ridden in the Tournament of Roses parade.

Edward Bohlin is arguably the most famous silver saddle maker to have ever lived. Born in Sweden, he made his way to Montana in the early 1900s. He opened his first saddle shop in Wyoming and, after a chance meeting with cowboy star Tom Mix, moved to California where he produced silver and leather items, including many grand outfits for parades. His saddle company reached its apex in the 1930s when Hollywood cowboys reigned supreme. His clients included Roy Rogers and Dale Evans, Hopalong Cassidy, John Wayne and Mae West, among others.

“He was a great artist,” Mort notes.  “He built beautiful silver saddles and dated movie stars.”

Interestingly enough, the Fleischers aren’t interested in items with celebrity ties. “What matters to us is quality,” says Donna. “We really care about the maker and what was a representative saddle or pair of chaps from that person.”

“We really care about the maker and what was a representative saddle or pair of chaps from that person.”

The Bohlin saddle is rivaled only by a Frank Coenen masterpiece. Showcasing 22 silver repoussé cameos, the “San Fernando” saddle was the artist’s final creation, taking him four years to complete. It features 40 pounds of silver and weighs 150 pounds. “This is probably my favorite saddle,” notes Donna. “It’s so beautiful with all of the scenes in silver.”

Just north of the main house, across a small bridge that spans a wash, are the stables. Inside, a former hay-storage room has been converted into a second museumlike space filled with dozens of saddles. The walls are lined with metal beams, each of which holds two custom half-timber saddle racks that slide in and out for easy access. Additional saddles fill the center of the open area, and a small backroom holds even more examples, including Donna’s prized trophy saddles that she won in cutting competitions. Most of the pieces here are from the late 1800s to early 1900s, with a few from as recently as the 1940s.

1. A fine example of a late 1930s-early ’40s saddle by legendary maker Edward H. Bohlin. It features silver tapaderos, or hooded stirrups, and a large silver skirt. A bucking bronco in brown can be seen on the black leather fender. 2-3. A bridle and matching spur present a young senorita crafted of silver. The leather strap on the spur features piteado embroidery. Made in Mexico in the 1920s. 4. This modern replica saddle was handcrafted by Bill Allison of Montana, where the Fleischers own a working cattle ranch. The artwork on the fender is a scene from “A Bronc to Breakfast” by famed Old West artist Charles M. Russell. 5. Mort had this replica Pony Express saddle made specifically for his collection. “You can’t find original ones, as the Express only lasted for 18 months,” he says. It comprises a wood “tree,” or frame, and a leather “mochila,” or cover, with large locked pockets for holding mail. The mochila could swiftly be removed from one tree and placed on another, allowing riders to quickly change horses. 6. This Charro-style Mexican saddle was a gift from Donna to Mort. Made in the 1930s, it features raised white leather roses on a contrasting black background. The large pommel is ebony, with mother-of-pearl inlays. A previous owner had covered it in white shoe polish, so Mort restored it to its original beauty.

There are Mexican saddles with mother-of-pearl inlays and piteado embroidery, a special technique that uses thread made from the fiber of a century plant. Trick saddles with tall, narrow horns for easy grip sit next to roping saddles with thick horns designed for wrapping rope around while lassoing cattle. Here, visitors can easily distinguish between the tall cantles that are indicative of the late 19th and early 20th centuries and the low versions that signify later years.

In the center of the room is a replica of a Pony Express saddle. Its simple leather mochila and wood tree stand out in a sea of tooled leather and silver decorations. “You can’t find any genuine Pony Express saddles; they just don’t exist,” notes Mort, who commissioned the piece. Next to it is a pack saddle designed by Bohlin.

One of Mort’s favorite saddles is a contemporary piece created by Montana-based artist Bill Allison. “I met Bill about 10 to 15 years ago. He’s a real cowboy who transitioned into a saddle maker,” says Mort. This particular commission, in the form of a loop seat saddle circa 1890, features hand-tooled replicas of paintings by famed Western artist Charles Russell.

Today, the Fleischer’s Western collection is as much a part of them as is their cowboy lifestyle. “It’s how we’ve lived for 25 years,” says Mort. “I was in finance, and for me, when I’m on the land, I’m free. For a moment, you get rid of the complexities of life. So Donna and I decided to build our own lifestyle. We liked horses, we liked the West, and we liked doing all the things that cowboys do. We wanted to immerse ourselves in the culture, and these artifacts represent that.”

“I look at parade saddles as though they’re the West that never was—the West of our imagination.”

1-2. A closeup detail of the Porter saddle, shown in full glory (image 2), highlights its many design elements, including tooled leather, repoussé silver, buckles, a bandolier and a holster, which holds a revolver with a mother-of-pearl grip. 3. An antique Colt revolver with an ivory grip. According to cowboy lore, the four notches at the bottom of the grip represent the number of men shot with this gun. 4. Hidden behind a massive bank vault door in the Fleischer’s home is part of the collection. Parade saddles surround cabinetry that displays handguns and spurs and other small accessories. On the wall are chaps, holsters and pistols and an array of Mexican spurs. The headdress in the far corner is a replica. Beside it is a poster of “Buffalo Bill” Cody. 5. This 1940s mint-condition silver parade saddle was crafted by Edward Bohlin. During his career, he made approximately 500 saddles, and this particular example “is among the top 5 that he ever produced,” notes Mort. It features five shades of gold, repoussé and filigreed silver, and silver thread. Note the matching gloves stored in its stand below. 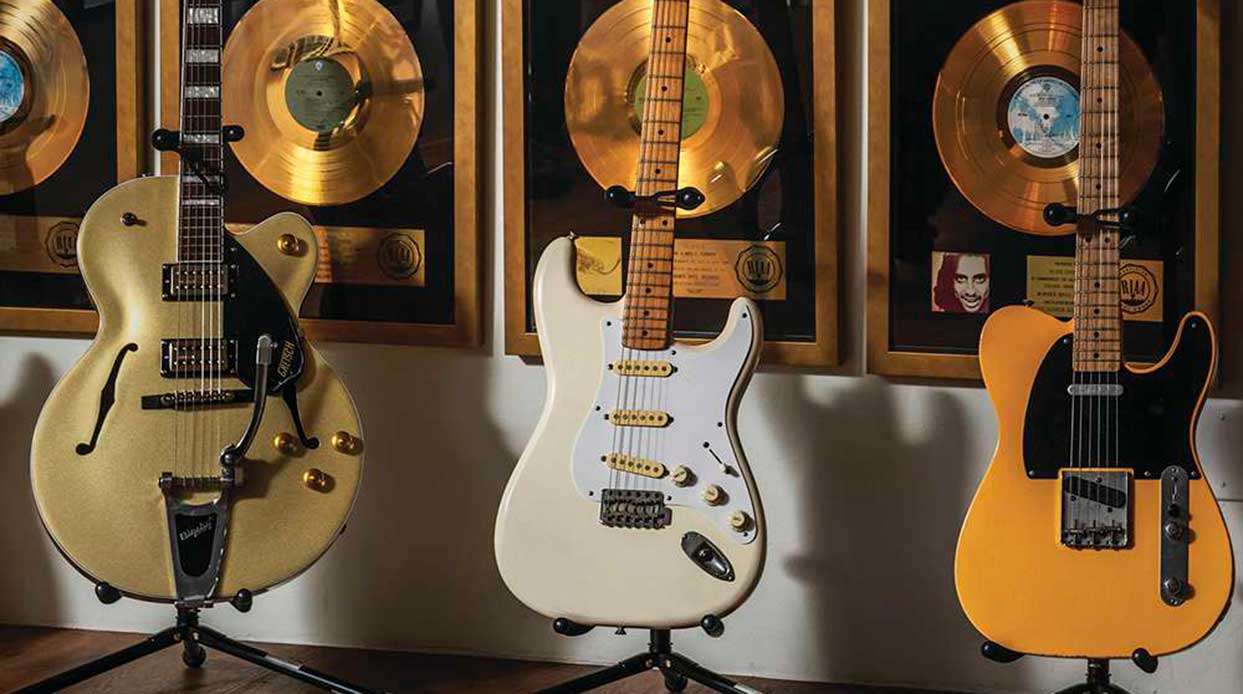 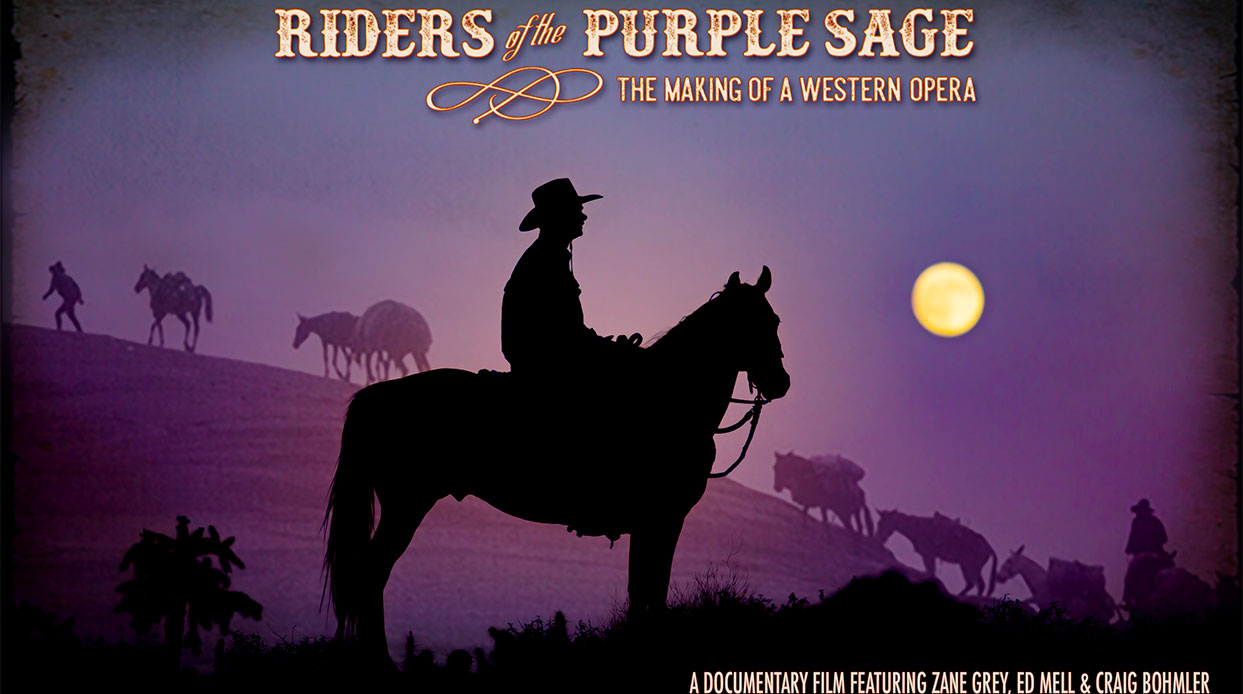 Go Behind the Scenes of Riders of the Purple Sage 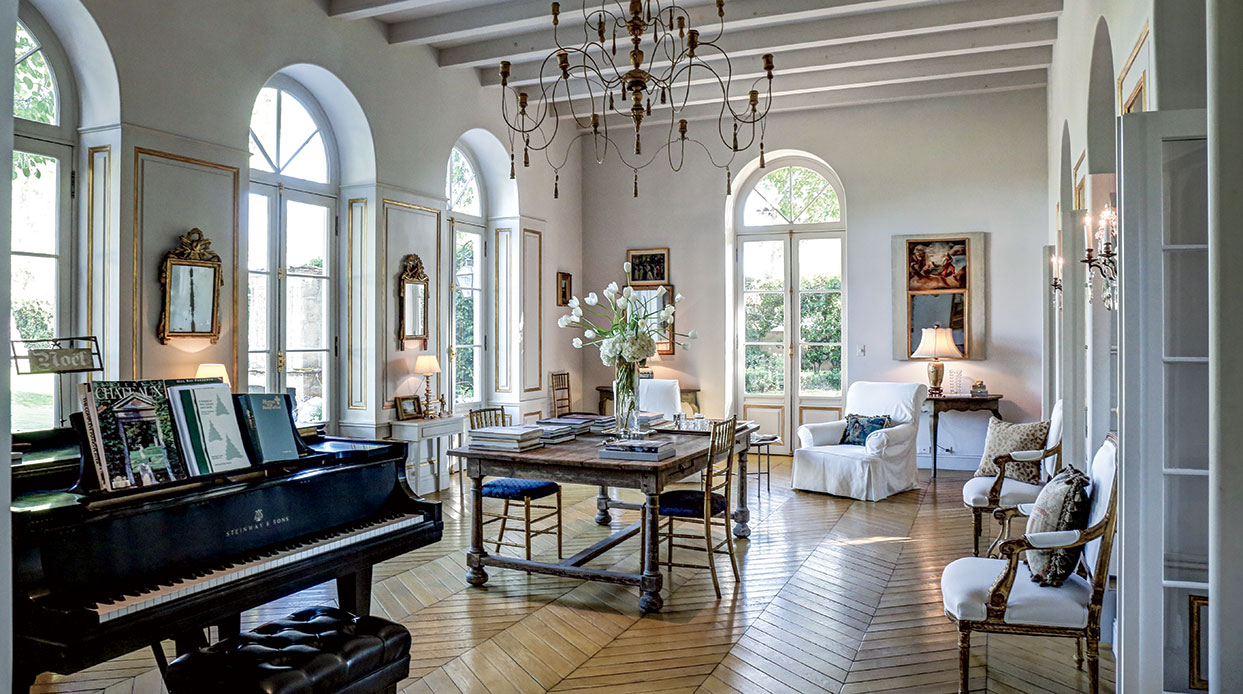