This Carefree Hacienda Garden is a Symphony of Texture and Color

A Carefree couple finds solitude and joy in their luxurious outdoor gardens.

Before purchasing their home in Carefree after a 2016 visit to the Valley, Marty and Linda Ellison looked at more than 22 properties. The couple, who lived in the Pacific Northwest, wanted to escape the endless winter rain and chilly gray days. They were drawn to the home’s haciendalike features: low-slung architecture, a U-shaped floor plan that wraps around a swimming pool courtyard and an abundance of outdoor garden spaces that Linda couldn’t wait to fill with colorful flowers. “We saw a lot of potential here,” Marty says. “The property is all walled in like a little oasis in the middle of the desert.”

Initially, the Ellisons hired an exterior landscaping company, but it didn’t go as well as hoped, Linda says. Then, she saw the work of landscape architect Donna Winters in an issue of Phoenix Home & Garden magazine and invited Winters to see their home. “I had been so frustrated. At the end of that first meeting with Donna, I cried tears of happiness,” Linda recalls.

Winters, a Phoenix Home & Garden Masters of the Southwest award winner, immediately sensed that the Ellisons cherished their garden spaces. They were seeking a lived-in look that would soften the surrounding walls, be instantly comfortable and infused with color. Winters, and her colleague, Patricia Rossi, worked closely with them to find the right solutions. “Part of the relationship is getting to know each other,” Winters  says. “You want a garden to take on the personality of your clients.”

With numerous areas to tackle—the approach to the house, front and side yards, north- and south-facing patios and the pool courtyard­—Winters and Rossi set out to craft a cohesive design incorporating  many elements, from form and mass to texture and color. “This is a language, a story that’s being told with plants,” Winters says.

The front yard was a graveyard of dying cactus that lacked significant color, Marty recalls. To remedy, Winters cleaned up the debris from years of rain and growth and reorganized existing plants and cacti, replanting them in places where they would thrive, some in the sun, others in the shade. She took the hulking perched boulders and unnatural-looking dirt mounds and subtly transitioned them to blend in with the yard’s horizontal surroundings. “We respected all the big specimens that were in place and added to them, trying to create a flow with no big transitions,” Winters explains. She used onsite rocks to fashion a flagstone-like walkway to a spot in the garden where Linda and Marty enjoy sitting.

1. Bold accents, including dramatic boulders, golden barrels, Moroccan mounds, agave and a striking cardon cactus help frame the mountain in the distance. 2. The Ellisons’ two goldendoodles, Liberty Belle and Maggie Mae, enjoy the grassy area in the backyard bordering the tiered Spanish-style fountain. 3. A combination of agaves, sausage euphorbias and golden barrels softens the towering palm tree trunks and creates an inviting entry to the house. 4. At the driveway’s edge, red bougainvillea, fronted by Mexican cardons, climbs the stucco wall, enhancing the home’s warm, haciendalike feel. 5. The narrow edge of the pool courtyard is brightened with flowers and softened by the overhead trellis, which provides filtered shade. 6. At the front entry, an Arizona organ pipe cactus is surrounded by golden barrels, yucca rostrata and sausage euphorbia alongside agaves, with an infusion of color from lantana and gopher plants. 7. A brick-lined path brightened with perennial color and succulents leads to another courtyard. “A hummingbird’s delight,” Winters says.

Rossi, whose forte is working with flowers, assisted Linda in filling her gardens with an overflow of color. They discussed desirable color schemes, and then shopped together for ceramic pots, containers and flowers. Armed with Linda’s wish list, Rossi installed flowering plants in each of the home’s garden spaces, from climbing white roses to red geraniums to blue hibiscus.

The home’s focal point centers around an oblong swimming pool and brick-lined patio equipped with a fireplace and sitting area for entertaining. Originally, pots were clustered together on one side, so Rossi moved them to other locations on the cozy patio, creating different vignettes around the pool. “Now when Marty and Linda entertain, their guests will be drawn to different areas,” Rossi explains.

Just beyond the pool, a Spanish-style tiered fountain borders a verdant lawn that gives way to several mature citrus trees, adding a lush feel to the grounds. Before the redesign, the backyard lacked continuity, but Winters and crew solved that by strategically placing plants and cacti, prompting viewers’ eyes to wrap around and pull them into the next space.

1. Part of the home’s reveal was allowing the architecture to be realized, Winters says. She accomplished that by framing the entry with a Mexican fence post “supporting the rhythm of the windows.” 2. The homeowners often retreat to the south-facing courtyard in the morning to enjoy the peaceful setting. Designer Patricia Rossi added splashes of color by layering pots and flowers around the tiled fountain. 3. A private courtyard with a gurgling fountain provides another quiet space for the homeowners to enjoy their exquisite gardens, layered with an eclectic grouping of plants.

Each garden boasts a gurgling water feature, creating a peaceful and calm environment that the Ellisons treasure. During the day, the couple sits in different spots on the property to enjoy each garden’s distinctive atmosphere. “Every window has some sort of garden experience. It’s hard to walk by and not go outside,” Linda says.

Marty and Linda are grateful for the work Winters and crew have done to transform the gardens of their Carefree hacienda into a resort-style retreat, but Winters sees it another way. “We’re the lucky ones. To know that the gardens have provided them joy and fulfillment, we couldn’t ask for more,” Winters says. “It’s beyond words.” 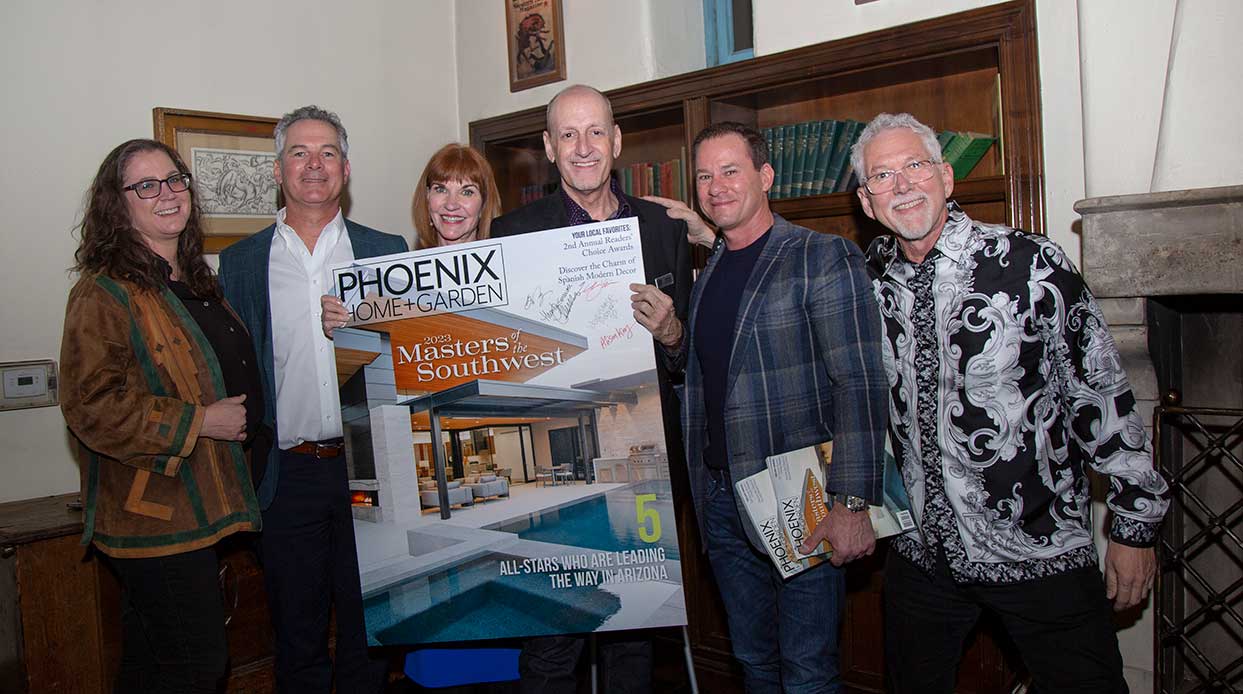 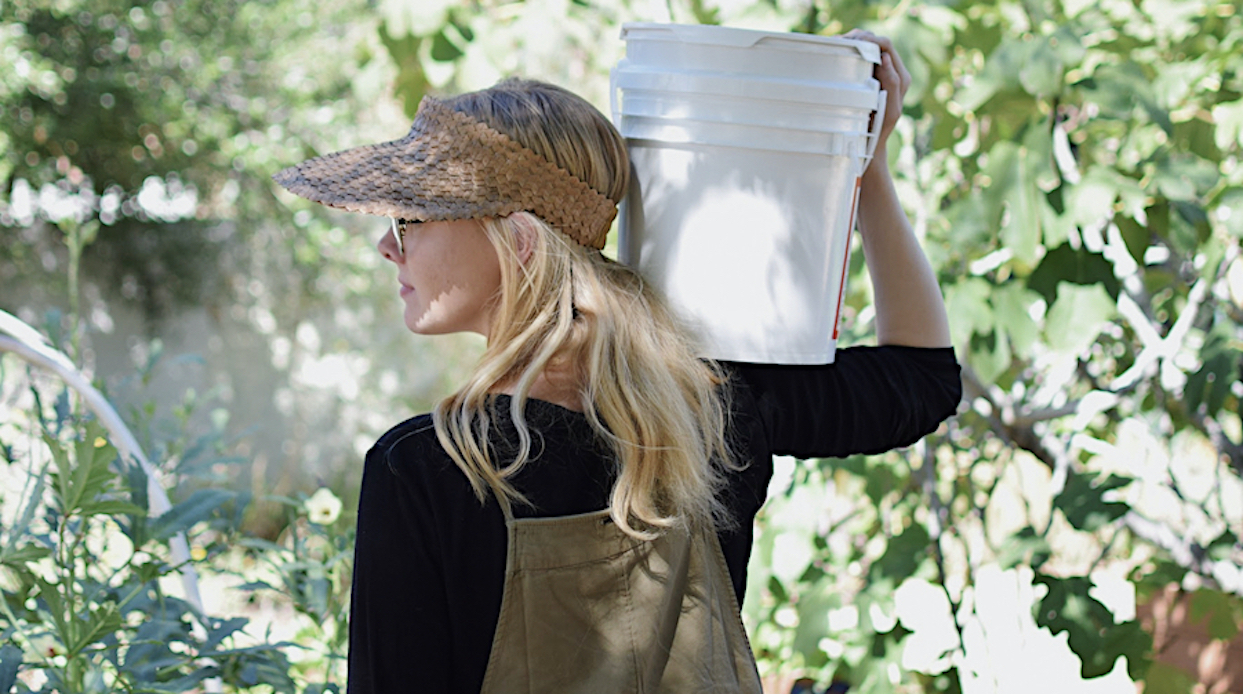 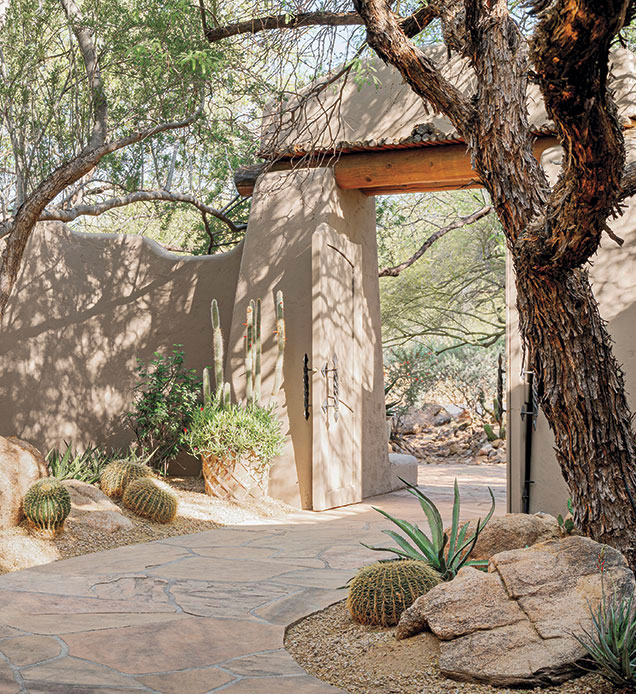