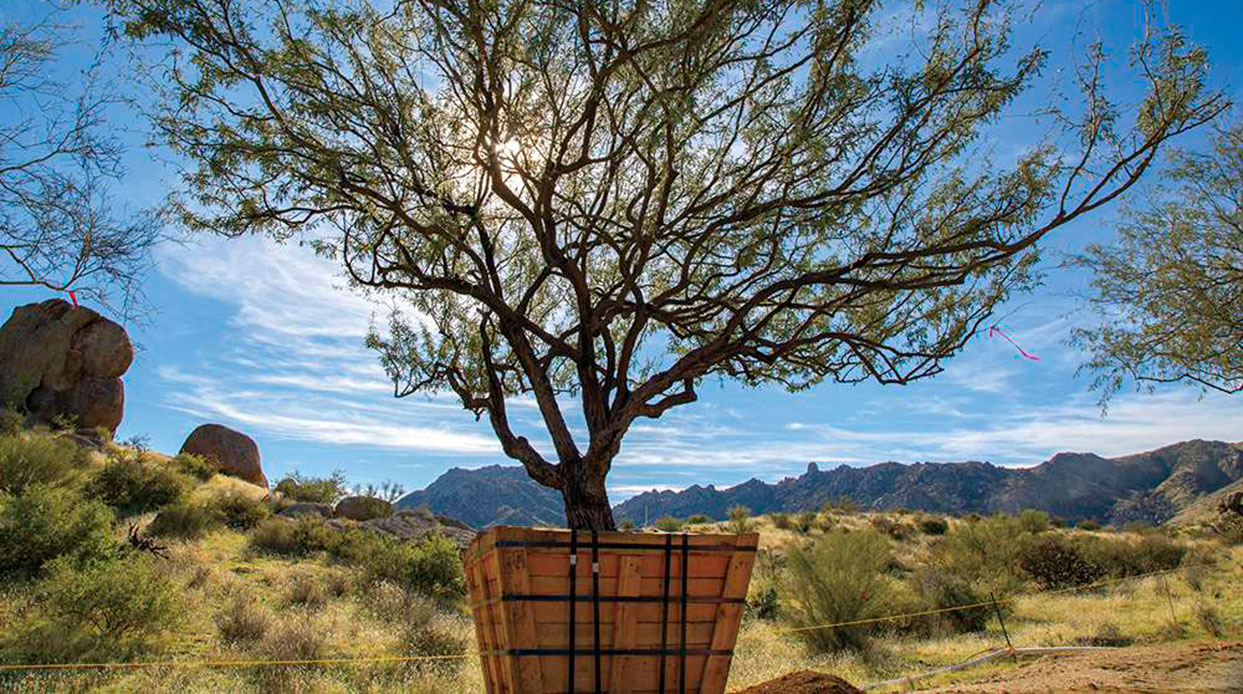 Native plants get another lease on life after being salvaged and repurposed.

On a recent December morning, construction vehicles were busily, noisily grading a 40-acre lot on Pima Road in North Scottsdale, preparing the site for the addition of a housing complex. Tucked along the northern edge of the property, native plants sit in wooden boxes aligned in long rows, as if standing sentry. Once the residential community is completed, each of those trees and cacti—nearly 300 palo verdes, saguaros, ironwoods, mesquites, hackberries and golden barrels—will be replanted on the property, doing their bit to preserve the feel and history of their surroundings.

The company responsible for salvaging the greenery, Native Resources International, specializes in plant preservation and relocation, a business model that operates at the intersection of aesthetics and sustainability. Many architects, builders and homeowners want landscapes that feel as though they are truly connected to the Sonoran Desert, and neighborhoods have increasingly strived to support sustainability and conservation alongside construction. When Jeff Homan founded the Phoenix-based family-run company, along with partner Rob Kater, in 1994, “we were trying to promote the idea of saving vegetation before it’s destroyed by bulldozers and development,” he says.

They’re not alone in their mission. Increased population growth

This eye-catching ironwood tree was able to remain a focal point of a new home’s landscape in Paradise Valley, thanks to the preservation efforts of Native Resources International.

has spurred rapid expansion of housing and business formation, taking over large swaths of desert terrain. In 1981, Scottsdale was the first Valley city to adopt regulations protecting indigenous and specimen plants. This landmark legislation, known as the Native Plant Ordinance, requires developers to catalog all protected flora on the site and detail the proposed treatment of each. Other local municipalities, including Phoenix, Mesa and Peoria, soon followed with their own mandates.

At the North Scottsdale site, Homan and his crew have marked nearly two-thirds of the plants throughout the property as salvageable. Once a plant is identified as such—in Phoenix and Scottsdale, the requirements are 4 inches in caliper (trunk diameter) for trees and 3 feet high for cacti—the extraction process is at once delicate and thick with elbow grease. Backhoes are used to clear large chunks of dirt and rock from around the tree while taking care not to disrupt or damage the delicate root system.

ABOVE Prickly pears and agaves, as well as dozens of trees, are carefully tended to as they await replanting during the construction of a community in North Scottsdale. RIGHT Saguaros and indigenous trees are considered protected flora and must be preserved during development of new properties. Boxes for trees salvaged by Native Resources can range from 2 to 12 cubic feet.

About 5 miles away at Sereno Canyon, a luxury-home community that Toll Brothers is building near the Tom’s Thumb Trailhead, a backhoe carefully digs around a large mesquite, keeping its roots intact while workers box the plant and prepare to move it to an on-site nursery, where it will be cared for until it can be replanted within the new landscape. Winter isn’t an optimal time to uproot many indigenous species, so close attention is essential. “It’s just as much about saving the roots as it is the tree,” says Brian Kater, project manager for Native Resources and Rob Kater’s son. “The process of digging is all about the way you prune the roots, because eventually the tree is going to have to containerized.”

According to Larry Wandel, senior project manager for the home builder, any trees and cacti that are identified for salvage are replanted in common areas. “The city conducts inspections to verify removal, relocation to the nursery and replanting before issuing the final building permit,” he notes. “We value our longstanding partnership with Native Resources and its proven system to provide an environmentally sensitive approach to conservation during development.”

Homan says there’s a meaningful distinction between using a native tree from its original site versus planting one purchased from a nursery. “If you use wild species, you get a more immediate result,” he says. “When you use nursery plants, you ultimately get the same result, but it can take up to three or four years longer to get to the desired outcome. And most clients don’t want to wait that long.”

Getting an immediately mature landscape also means embracing the imperfections of wild plants, says Emily Kout, Homan’s daughter and Native Resources’ director of tree sales. “Desert-dug trees are not uniform. They weren’t cultivated, and they weren’t groomed to grow up a certain way. There’s a lack of character that comes with nursery-grown plants, where they all grew up in a row on a farm and were boxed up and shipped somewhere. When you use plants that matured on-site, each tree is different.”

Preserving indigenous flora has long been a critical part of design professionals’ thinking when it comes to creating Valley residences. Phoenix Home & Garden Masters of the Southwest award-winning architect Eddie Jones has collaborated with Native Resources on many of his custom projects. “Ninety-eight percent of the time, my default position is to always use native landscaping,” he explains. “It’s just logical.” Clients, he notes, relate to this standpoint on both aesthetic and preservationist grounds. “Sustainability and low water consumption are environmentally responsible. The facts that they are also beautiful, easy to care for and costs less to maintain are a real plus.”

Once a tree is flagged as salvageable, Native Resources gets to work. (1) A backhoe is used to clear a deep trench around the tree, being careful not to disrupt the roots. (2) The tree is then boxed, and (3) moved to an on-site nursery where it will be tended to until it can be replanted.

Burnette is also fastidious about preserving desert flora. The architect returns all of the original plant material found on-site to the perimeter of any home he constructs, and he also adds a seed mix to the property. “That’s so the native desert comes right up to the house,” he says. “A scar in the Sonoran Desert will last a century or more. It will not revegetate quickly. So we’re very sensitive about any mark that we’re going to make when we build something.”

Integrating desert-friendly plants is now so commonplace that owners of older properties are often looking to dispense with past landscaping trends that required heavy irrigation, according to Kout. Sod lawns, jacarandas and oleanders are out, while hackberries, blue palo verdes and other water-wise trees and cacti are in demand. “What we see a lot with the higher-end construction projects is they’re either demoing a house that was built in the ’70s or remodeling it to make it more modern,” she says. According to City of Phoenix statistics, 70% to 90% of residential homes at that time had turf lawns; today, the number is closer to 10%. “When you have a ’70s landscape, it’s out of date—people aren’t planting those types of gardens anymore,” Kout adds.

In addition to xeriscape yards, many clients are seeking “that one focal-point tree or single specimen that, when you come up your driveway or go around the corner, makes a bold statement,” Kout points out. A multi-armed saguaro, towering ocotillo or mature mesquite that has been growing on-site for decades can add a powerful visual punch to any landscape. Endemic greenery also fully connects a home to its surroundings. “Our goal in a native site is to make it look as though the house just landed there,” Burnette says.

As Homan puts it, “Our best compliment is when somebody says, ‘I can’t even see where you guys work.’” 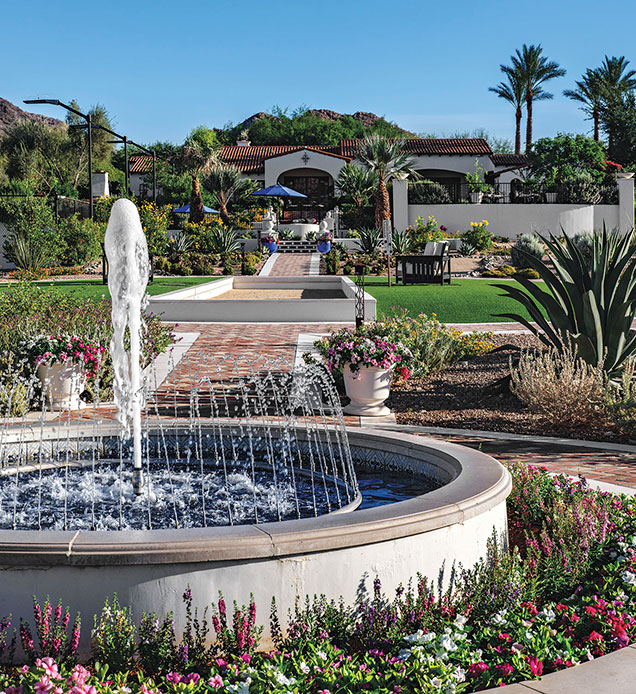 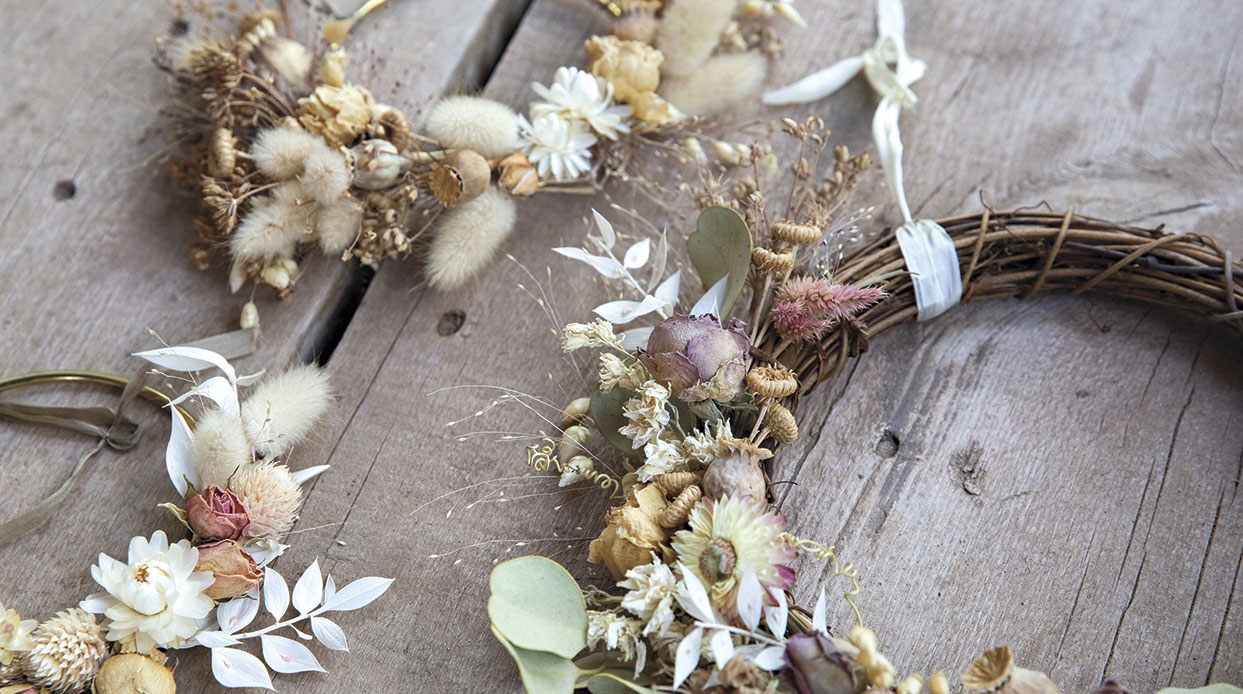 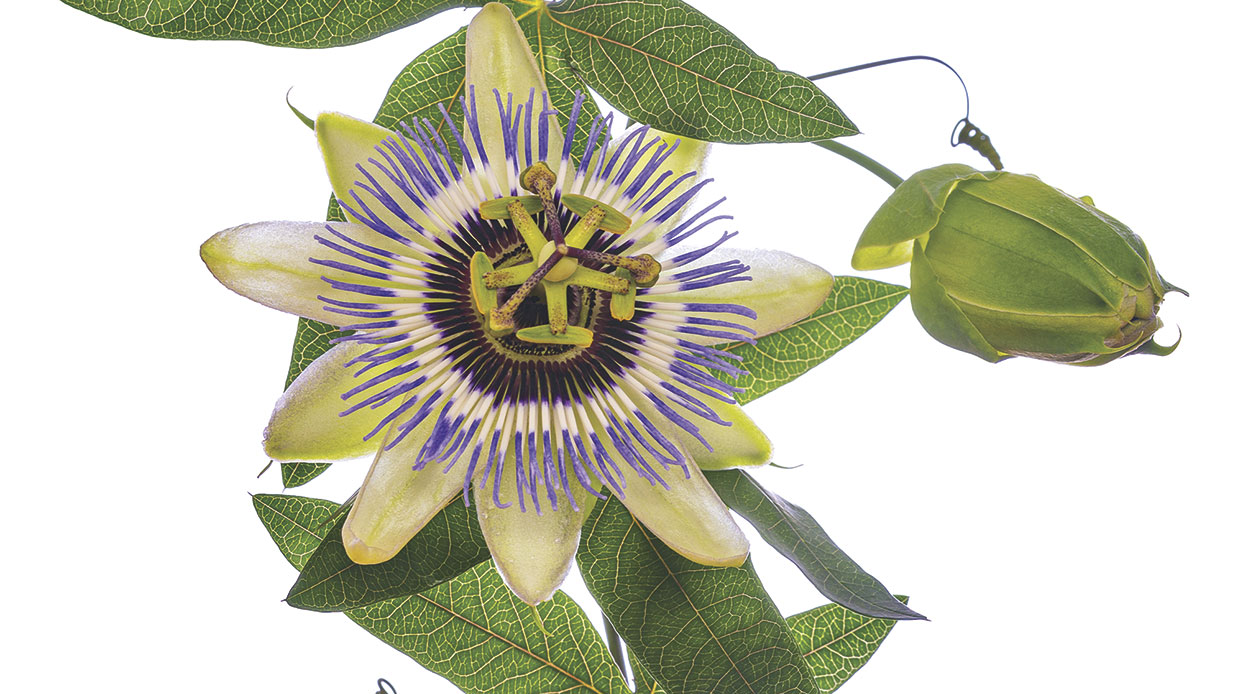