A Sense of Place

A chic makeover rekindles a couple’s love for their longtime family abode.

By Marilyn Hawkes | Photography by David B. Moore and Jill Richards

The doors to Beverly and Brian Burch’s comfortable Santa Barbara-style home, tucked away in a quiet Biltmore neighborhood, are always open to guests. Although the couple are now empty nesters, the house in which they raised their six children regularly hosts visits from numerous grandchildren as well as a wide circle of friends. “We have a huge family and do a lot of entertaining,” says Bev with a smile.

Like the Burch’s growing brood, the dwelling has matured and changed with time. When Bev first spotted the single-story property more than two decades ago while driving through the community, it was unoccupied and overgrown. But both she and Brian, who was attracted to the large lot and central location as well as the extensive landscaping and tennis court, could see its potential. After moving in, they sandblasted through 15 coats of white paint to reveal the ceiling and beams made of wood that had been reclaimed from the old Adams Hotel in downtown Phoenix, which was demolished in 1973 and replaced by what is now the Renaissance Hotel. Flecks of color still cling to the rustic joists, resulting in a rugged and weathered look.

A few years ago, the couple contemplated downsizing and began looking for a new residence. During that time, several real estate agents advised Bev to upgrade the home’s 20-year-old bathrooms and the master bedroom in preparation for putting it on the market. Once the couple started making small changes, “everything began to snowball,” Bev recalls, and instead of moving, they decided to stay put and refurbish. “Bev and I worked together on the plans, with her spending time on the design details and me collaborating with the contractor on the structural and construction matters,” Brian says.

The renovation included a new master bathroom and bedroom as well as a pool room, wine cellar and outdoor kitchen. The chestnut floors throughout the house were sanded and re-stained with a matte finish that lends an organic farmhouse vibe.

Bev, who owns a local home decor business, filled the rooms with antiques and treasures that she procured on buying trips with her friend, business partner and interior designer, Susan Rose. The two women, who say they’re more like sisters than work associates, transformed the home from shabby chic into what Rose calls “collected and curated with very clean lines.”

The master bedroom is cloaked in calming shades of white, from the linens and wall color to the Roman shades and is offset by the rich brown floors. A plush sofa, which Bev says is great for power naps, faces a limestone fireplace imported from France. The grouping provides an intimate conversation area and place to unwind. “It’s a very soothing space,” she notes.

1. Homeowner Beverly Burch stands at the dwelling’s front door, which was custom designed by a friend more than 20 years ago. Clad with a grape vine wreath and decorative iron accents, it is set in a carved stone door surround. Bev purchased the iron trellis during a trip to Paris several years ago. 2. The airy entry foyer reveals a first look at the chestnut floors that stretch throughout the house. An antique pine armoire and vintage iron chandelier hint at the home’s casual French elegance. 3. The custom dining room table was “inspired by a beautiful French antique,” says interior designer Susan Rose. Set for eight, it can be extended to seat up to 12 guests during dinner parties and holiday gatherings. A chandelier purchased in Paris complements a pair of 18th-century candelabras that adorn the fireplace hearth. An antique wood-and-glass framed door rests in front of the window, adding another layer of texture to the room. 4. Slipcovered seating in the family room adds a sense of casual comfort that beckons family and guests to sit back and relax. A baby grand piano rests in front of arched French doors, which open to the entry courtyard. 5.  In lieu of traditional chairs, Bev selected a shabby chic settee and primitive stools for the breakfast nook. The oversized, distressed tin pendant was an antique-store find. Window coverings were placed on the exterior of the home, giving the room a clean-lined, unfussy feel. 6. A photograph by Marc Douglas hangs in the bedroom entryway niche. Bev found the antique gilded frame during a trip to Texas.

The homeowners worked with interior designer Teresa Pavelonis on transforming the master bath into a study of timeless black-and-white elegance. Sleek underlit his-and-hers vanities, adorned with brass hardware and faucets, appear to float above polished stone flooring. The glass-enclosed shower and adjacent French doors and windows that overlook the leafy garden are framed in black steel, a design feature that’s repeated throughout the house. “It’s such a great, clean look,” Rose points out.

“We have a huge family and do a lot of entertaining.”

1. When renovating the pool room, the homeowners transformed a small nook into a glass-enclosed wine room. A wall-mounted air conditioner cools the space, which is lined with custom storage racks. 2. The plush sofa with a chunky, white wood frame and blue upholsterly is one of Bev’s favorite pieces; she’s reupholstered it three times. 3. The master bedroom is a study in relaxation. Bright white paint on the walls and ceiling, white window coverings and sumptuous linens in creamy hues combine for an open and airy feel. The original pitched ceiling provides plenty of space for a tall four-poster bed. A crystal chandelier adds a touch of glam to the serene setting.

Because the Burches frequently host large get-togethers, the kitchen and pool room are the focal points of the home. “Everybody hangs out in the kitchen,” Bev says. The large Carrara marble-topped island is a popular gathering spot, while the gas range, which features an oversized stainless steel hood, is flanked by open marble shelves that display dishes and wood cutting boards, a look that’s reminiscent of a busy restaurant kitchen. Easy-care exposed brick flooring adds a vintage charm to the amenity-filled room as do the antique French dining table and chairs in the kitchen nook.

In the mornings, Bev and Brian enjoy their coffee while relaxing in a pair of white linen armchairs in front of the nearby fireplace. Most of their seating is white or light-colored, which might seem perilous in a house that’s often filled with active children and pets, but Bev disagrees. “Everything is slip-covered,” she says. “If a dog gets up there or the kids spill something, you can just unzip the cover and throw it in the wash.”

In addition to the kitchen and outdoor areas, the pool room is a popular place for guests to congregate, according to Rose. The bright, airy space originally encompassed three dark bedrooms. Brian notes that opening up the room and adding large windows that overlook the pool were some of the best aspects of the remodel and make the room more usable for entertaining.

A comfortable couch and coffee table facing a TV fills one side of the room. On the opposite end, Bev and Brian added a well-stocked wine cellar. Its exposed brick walls were discovered beneath the home’s drywall. A petite bistro set welcome guests for impromptu wine tastings.

Now that their home has a fresh, updated look, the Burches have once again fallen in love with everything that if offers. Notes  Bev, “It’s a great family house, and we live in all of it.”
Interior Designers: Beverly Burch and Susan Rose, Willows Fine Goods and Design Landscape Architect: Russell Greey, Greey Pickett
For more information, see Sources.

1. The bright and airy great room combines antique and modern touches. Vintage pendants above the island blend effortlessly with the stainless steel appliances and range hood, while the room’s palette of whites and light wood tones results in a soothing atmosphere that embraces guests. 2. Red brick floors and an exposed brick wall are the perfect foil for the kitchen’s clean, white palette. Elegant marble countertops and open shelving showcase the homeowner’s collection of wood cutting boards. Bev notes that the room is a favorite place for friends and family to gather. 3. A cozy seating arrangement is an ideal spot for reading or enjoying a cup of coffee. The slim antique French limestone mantle replaced a larger, more ornate version. 4. Originally, the pool room housed three small bedrooms and closets that obstructed the outside light. During the renovation, the contractor knocked down walls and added large windows. The ceilings are fashioned from wood recovered from the Adams Hotel in downtown Phoenix. 5. Black steel frames used in the master bathroom on the glass shower as well as exterior windows and doors of an adjacent sitting nook that overlooks the garden ground the white-on-white decor and give the home a fresh, updated appeal. 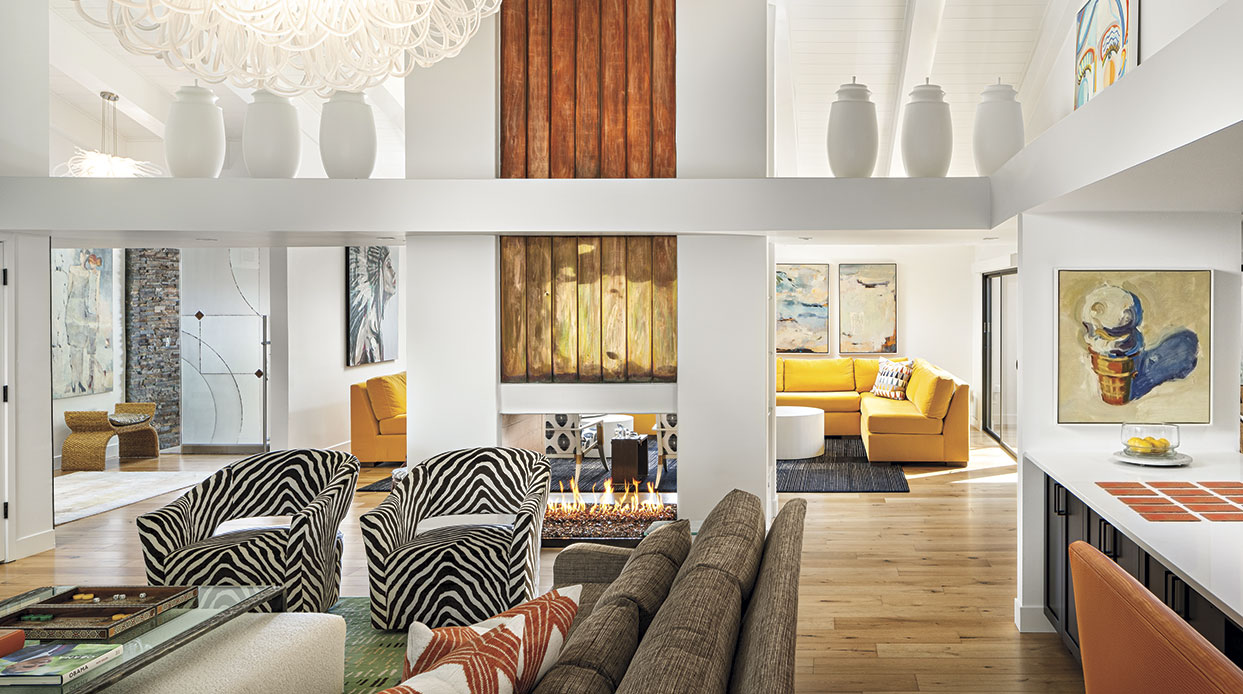 Inside a House That Radiates Cheer and Positive Vibes 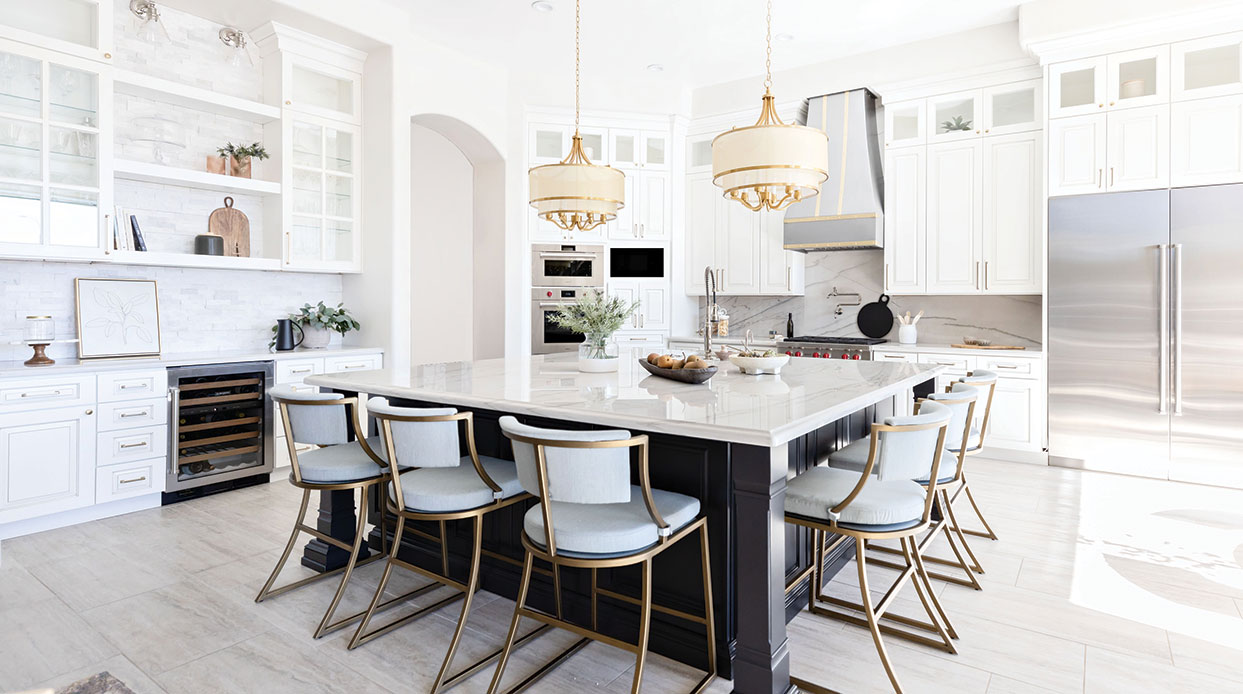 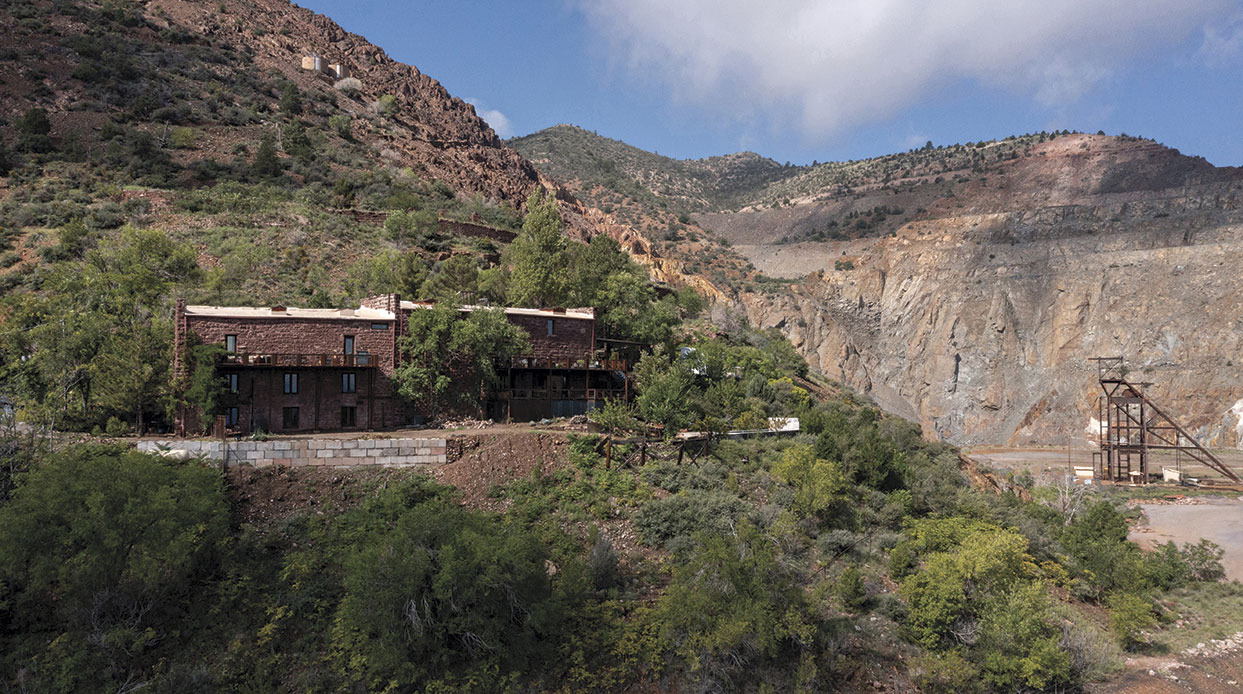