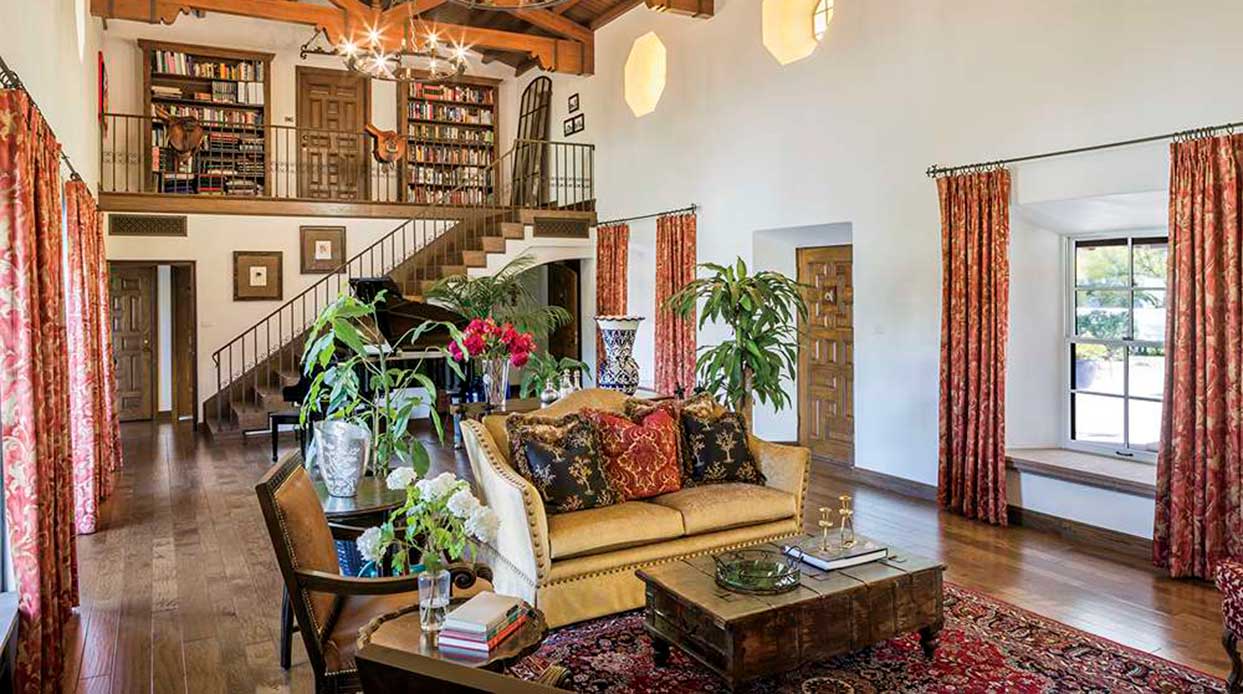 On a patch of serene, green land in the middle of Scottsdale, there sits a stately Spanish colonial-style home that beckons passersby with whispers of its storied background.

Ken Bates, a local contractor, passed by often while in search of a new home renovation project, and when the housing market dramatically dipped in 2008, he scooped up the abode in a short sale. Ken and his wife, Nancy, along with their six children, took up residence in the original family home at the historic Brusally Ranch.

“We weren’t planning on staying here,” admits Ken. “We were going to renovate and move on, but we just fell in love with this place.” One look at the clerestory stained- glass windows, wrought iron detailing and imaginative equestrian-themed fixtures, and it’s not hard to imagine how history got a hold on the Bates family.

That history began with bank architect Ed Tweed, who moved from the Chicago area to Arizona in 1950, when the population of Scottsdale was about 200 and thousands of acres of untouched land spread out beneath the desert sky. Upon arrival, he purchased 160 of those acres and created, before anything else, a barn to house his newfound passion: Arabian horses. Ed then designed and built a 6,000-square-foot family home and a series of outbuildings, all in the Spanish colonial style and with great attention to detail. He named the property Brusally Ranch—a portmanteau of his children’s names, Bruce and Sally—and through it, established the state’s world-class Arabian horse breeding program.

1. Decorative brass hardware affixed to the original front door matches the Spanish aesthetic of the home. 2. Original to the house, these rusted iron wall sconces add a Western flair to the exteriors. 3.  Stirrup-inspired light fixtures hang throughout a hallway in the Bates’ home, celebrating the property’s equestrian heritage.

Shelley (Chaille) Groom Trevor, granddaughter of the Tweeds and the current overseer of the sister Brusally Ranch property in Show Low, remembers her grandfather as a visionary and true Renaissance man. “He was a very multitalented person—an architect, businessman, artist and the founder and first president of the Arabian Horse Association of Arizona. And everything he did was about quality and design.”

1. Nancy Bates tends to her two quarter horese, Mikey and Eddie. Behind them, the structure the family now uses as a barn was originally an enclosed swimming pool built for Ed’s wife, Ruth. 2. The Bates remodeled the pool area but mostly stayed faithful to the backyard’s first design. The barbecue area along the back wall is a favorite spot of Ken’s, while multiple seating spaces easily host the family of eight.

Shelley has fond memories of her young adulthood spent among the prized Polish Arabians at the Scottsdale ranch. “I devoted my life to the horses and the family business, come hell or high water,” she recalls. “I lived in a stable apartment in the east barn, and I often had dinner with my grandparents in their home. It was, and still is, such a beautiful house.”

1. An artist as well as an architect and horse breeder, Ed Tweed sketched detailed pictures depicting society life in the early 1900s. 2. When developers went to remodel an upstairs closet into a bathroom, they found a note from Tweed sealed into the wall. In it, he acknowledged the space might better serve as a bathroom in the future and included detailed descriptions and drawings of how a shower might be situated. Plumbing had already been built into the walls thanks to his premonition.

The fact that the home retains its original glory after more than a half-century is in no small part thanks to Ken, who lovingly and meticulously restored every square foot in line with Ed’s design. “We reused every door in the house, found exact copies of the original tile to redo the exterior designs, and made sure every inch of the kitchen addition was executed as I imagine Ed would’ve done it,” says the proud homeowner. Shelley enthusiastically approves of the work he’s done. “It was like my grandfather was whispering in Ken’s subconscious ear,” she says. “He made a point of getting as close to the original vision as he could, and he poured so much love and honor into the house.”

Before the Bates family moved in, however, Brusally Ranch was a different kind of home. In 1999, after Ed and his wife, Ruth, passed away, their daughter, Sally, donated the property to the Mayo Clinic to become the Arizona Transplant House, where patients recovering from surgery could heal in a peaceful environment. “My mom wanted the house to have a worthwhile future and be a place that gave back to the community,” says Shelley. Mayo sold the property to developers in 2007, but the ranch’s philanthropic memory has persevered beyond its clinical tenure. “I can’t tell you how many people have wandered up to our front door with tears in their eyes and said, ‘I owe my life to this house,’” says Ken, who has been extremely touched by the history of care and compassion his residence represents to the community.

Opposite the staircase in the great room, an enormous fireplace takes center stage in a sitting area flanked by original clerestory stained-glass windows and views to the front and back exteriors.

Though the Arabian horses are long gone and the transplant patients have healed, Brusally Ranch’s future is as bright as its past. Ken, who is confident the home more than meets the criteria, is currently working with the Scottsdale Historic Preservation Program to acquire official historical registration of the house, which ensures that it can’t be torn down or remodeled. Once city designation is approved, he’ll apply for state recognition as well. “Nancy and I don’t plan on moving any time soon, but we want to make sure this home is preserved for years to come,” says Ken. “And while we’re here, we feel strongly about opening up our home to the community for charity events and fundraisers to continue the legacy of generosity and philanthropy established by the Tweed family.”

Carved pocket doors slide out to separate the dining room from what was initially the kitchen but is now used as a wet bar by Ken and Nancy. “I’ve been building homes for 35 years, and these doors from the 1950s are in better shape than some in houses that are 6 months old. The craftsmanship is incredible,” notes Ken.

Ed, with one of his Polish Arabian horses, at Brusally Ranch in the 1970s. His Spanish colonial-style home stands in the background. 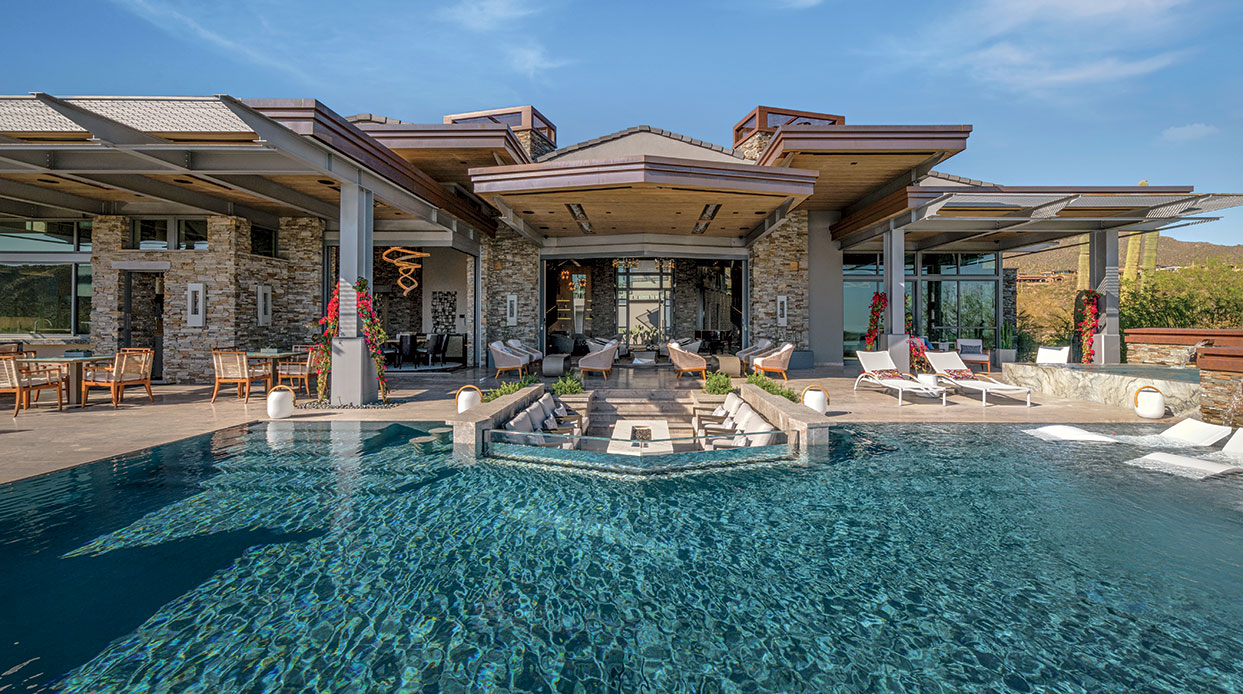 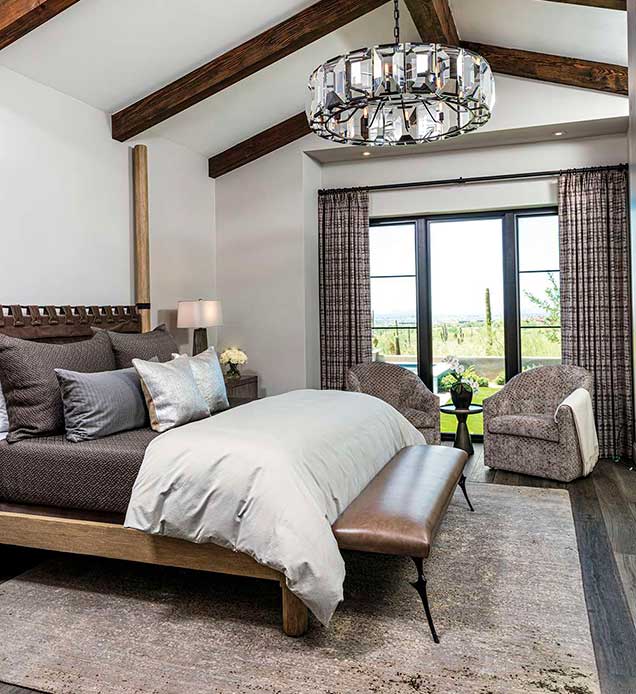 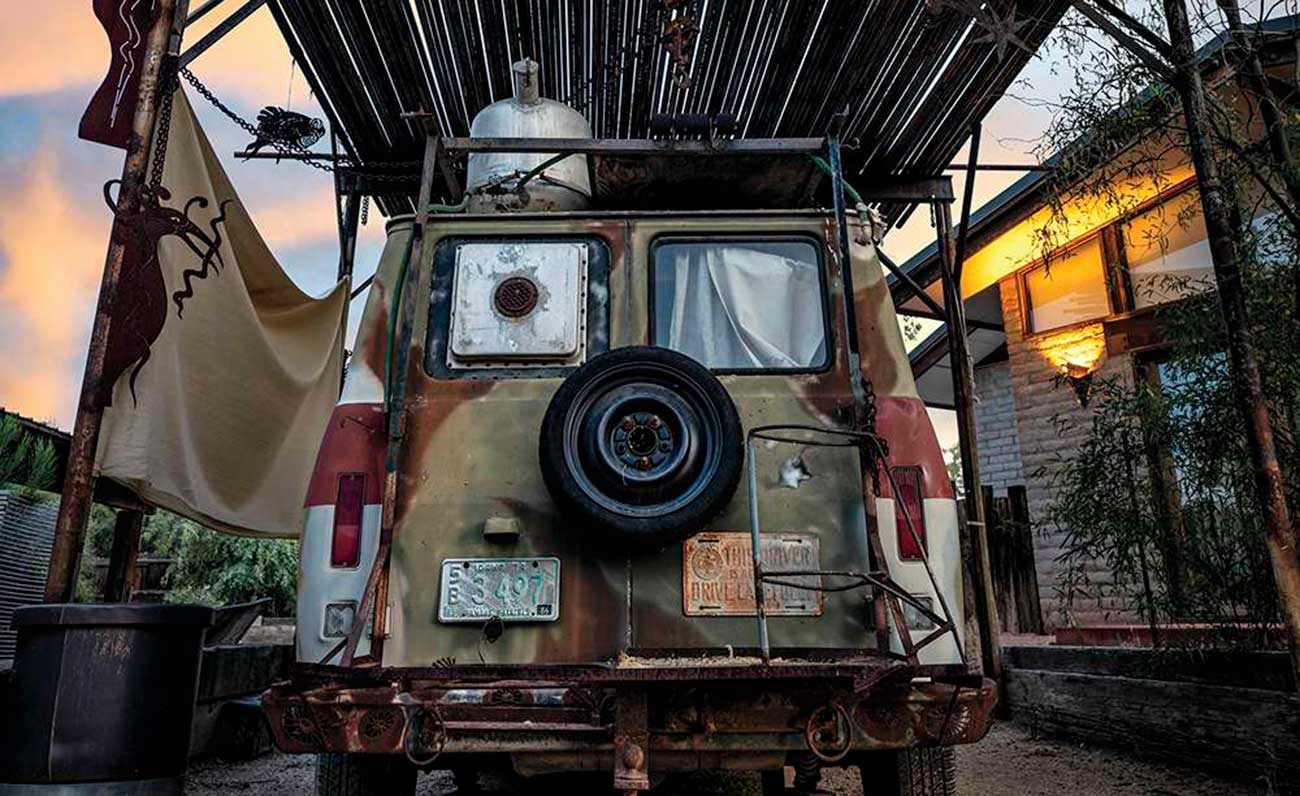