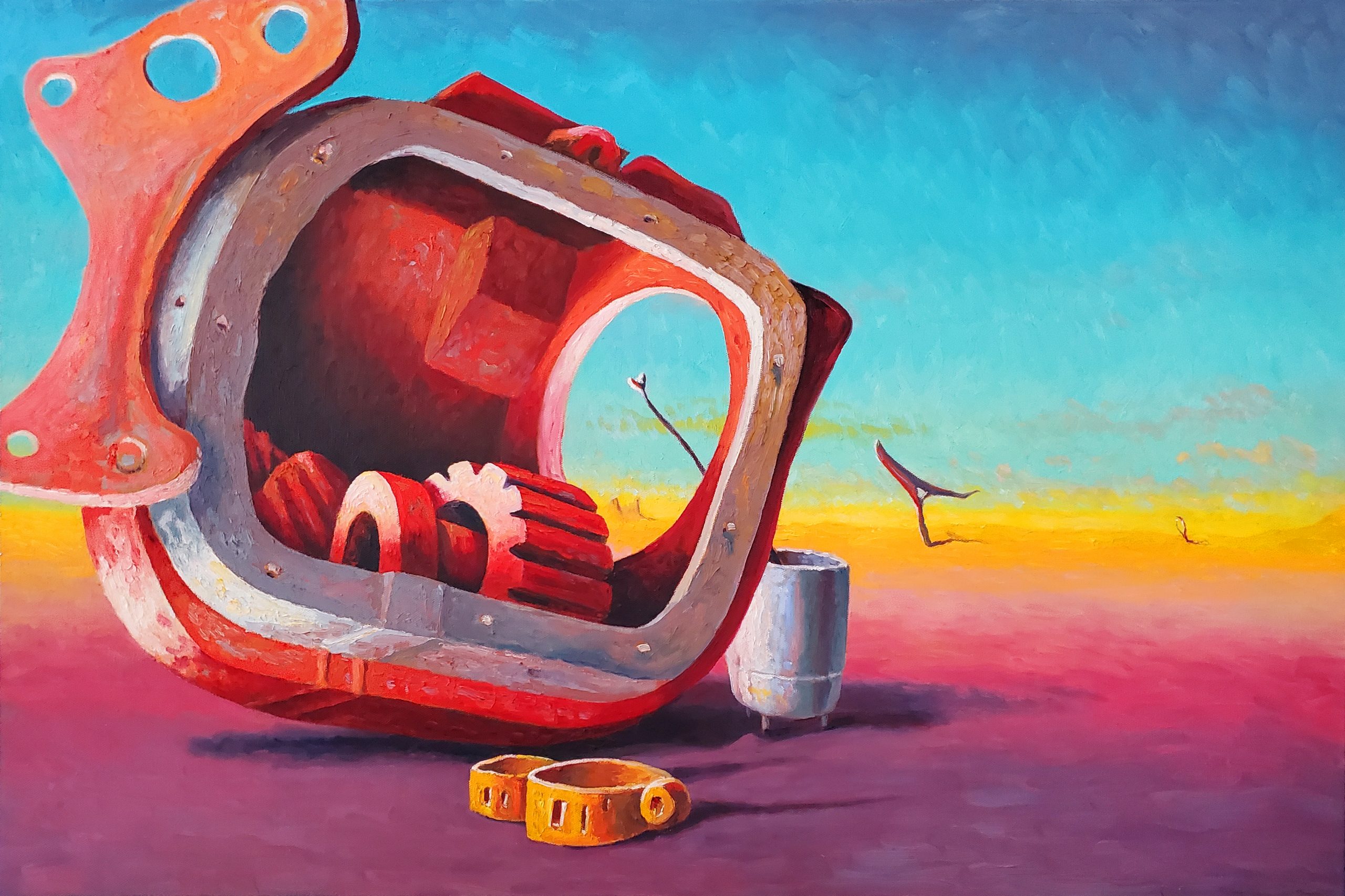 Description
Exhibition of 14 new oil paintings opens at Fair Trade Café on November 28 Open portals to strange new worlds at your local coffee shop. This winter, the walls of Fair Trade Café in downtown Phoenix will display an array of enigmatic scenes: visages of machine guts growing from rolling hills; exotic windmill shapes standing sharp and sentinel in a glowing desert; unusual tubes arching like aortas from assorted gears and gadgets. What are they? Where are they? The viewer’s impressions become the stories in the exhibition “Emergence: The Art of Jason Hugger,” on display at Fair Trade Café from November 28, 2021 through January 1, 2022. Organized by Philip Talarico of Downtown Artists Collective, “Emergence” showcases 14 new Jason Hugger oil paintings on canvas. Each scene reimagines discarded objects from Hugger’s collection of junk muses into characters that occupy curious landscapes with a plethora of potential purposes. “The general basis of my work is painting as an exploration of the worlds in my mind. I love the desolateness and isolation of the desert, and it creates objects with a kind of anonymity to them,” Hugger says. “You don’t really know what their purpose was before they ended up in my paintings. I find that mystery very intriguing when creating a composition.” Hugger has shown his work in dozens of shows at galleries around Arizona since the 1990s, but there’s something different about “Emergence,” he says. “In recent years, I’ve been using more dramatic scale, in terms of how the objects look in a space. I’ve made them look more... romantic, as opposed to classical. With classical space, everything is kind of in an enclosure. Romantic is more open. I believe these paintings are more open, they have more scenery, and the objects tend to be a little bit more mysterious than in past works.” One of the paintings, “Starfarer,” depicts a box-shaped vessel that could have once been anything from a TV to some sort of compartment in a larger appliance. “I used an object that was very machine-like and organic at the same time,” Hugger says. “It’s reminiscent of some sort of alien spacecraft that landed on a deserted world and it’s been abandoned there for centuries or even eons. That in itself presents a kind of mystery to the scene.” Another painting in the exhibition, “Amalgamation,” creates cohesion out of chaotic shapes and jagged bits, forming something familiar yet obscure. “The definition of the word ‘amalgamation’ is joining two or more elements to create stability,” Hugger says. “In that painting are a variety of machine parts that are separate, but they’re working together for a common purpose – whatever that purpose is.” “Emergence: The Art of Jason Hugger” will be on display at Fair Trade Café, 1020 N. First Avenue in Phoenix from November 28, 2021 through January 1, 2022. A reception with the artist takes place on December 4 from 4 to 7 p.m. For more information, visit jasonhuggerart.com. What: “Emergence: The Art of Jason Hugger” When: November 28, 2021 through January 1, 2022 (soft opening on December 4) Where: Fair Trade Café, 1020 N. First Avenue, Phoenix