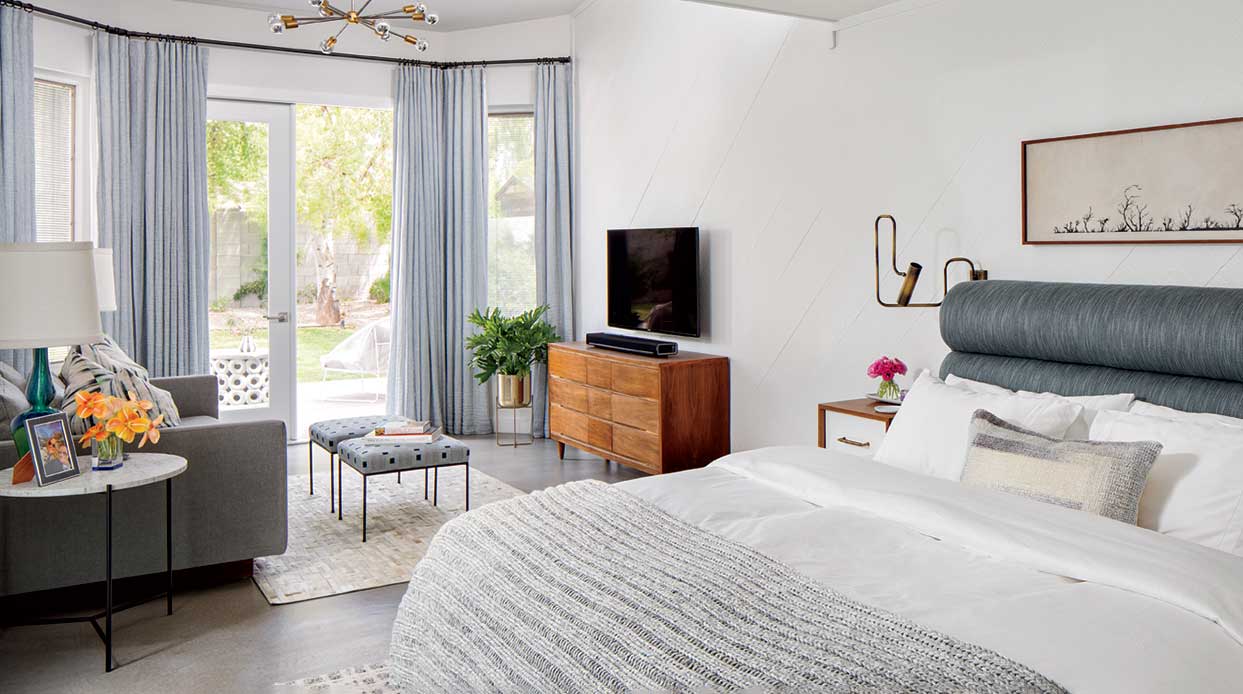 The right house convinces a pair of Californians to leave the Golden State for Arizona’s Sonoran cityscape.

It was a chance visit during a road trip through the American Southwest more than four years ago that convinced interior designer Denise LaVey and her wife, singer-songwriter Sarah Dashew, that Phoenix would be more than a mere pit stop. Both felt instantly connected to the vibrant and creative feel of
Arizona’s urban landscape—and they began discussing the prospect of selling their beloved 1931 Spanish colonial revival home in Los Angeles and moving to the desert. “If you’d asked me seven years ago where I’d be putting down roots, Phoenix would have been the last place on my mind,” says Denise. “I’d never even seen the Grand Canyon.”

The couple toured 20 to 30 homes, and continued to look for just the right place even after returning to L.A. “The first time we saw the house was online. It just popped up late one night,” says Sarah of the 3,000-square-foot, three-bedroom, three-bathroom ranch-style abode in North Central Phoenix. “Something about the height of the ceilings and the light attracted us, so we flew over to take a look.”

The unassuming midcentury dwelling, built in 1954, “was different, of course, in person,” Denise recalls. “It was much darker, and it was obvious that it hadn’t been updated in at least 30 years and needed some TLC.” But the size was right; it had a pool and enough land for their two pups to run around; and it was centrally located in a great neighborhood. “We had an intuitive feeling to just go for it,” the designer adds. “In fact, I couldn’t wait to get my hands on it, and when I did, because the house was so dark and closed off, I actually ripped out a whole section of built-in shelves with my bare hands!”

The couple originally planned to bring in a contractor from Los Angeles for a month of intensive remodeling work. But when that plan fell through, their realtor introduced them to builder Aaron Genova.

“Aaron was a wealth of invaluable resources, which worked out well because what we thought was going to be a two-bathroom remodel turned into a whole-house renovation,” Sarah explains.

According to Genova, the project was a collaborative process. “The fact that Denise is a design professional in the business and that she and Sarah are creative people with specific ideas about what they like made the job very engaging and fun,” he says. “The intensive makeover allowed us to resolve some existing issues with the home, such as exterior windows and doors that previously had been replaced in an incongruous and unpleasant way, while bringing in more light and opening up spaces within.”

Known for combining relaxed elegance with clean lines and subtle textures to create inspiring environments for her own clients, Denise paid the same attention to detail when it came to her new home. The result is a warm casual-yet-sophisticated look with an eclectic quality that plays off its midcentury roots.
Imbued with natural light, the home now boasts an airy, spacious feel, with inviting rooms awash in white walls. Dingy wall-to-wall carpeting throughout was removed and the newly polished concrete floors were left uncovered for an era-appropriate touch.

In the living room, Genova installed a 20-foot-long glass wall that floods the interior with natural illumination and connects the indoors to the outside living and entertaining spaces, which were also updated with new hardscaping and plantings, charming covered patios, and multiple seating areas complete with fire features.

The most dramatic transformation, however, occurred in the master bath, which had been dark and cramped with a walled-off tub and dated cabinetry and surfaces.
Taken down to the studs, it was given a fresh, open feel and now features an accent wall cloaked in floor-to-ceiling concave hexagonal tile, a floating walnut vanity, a waterfall shower and a free-standing bathtub.

Looking back, Denise and Sarah are glad they listened to their intuition. “In all creative professions, interior design included, instinct plays a big part,” says Denise. “I made the choice to move to Phoenix on not much more than a feeling of connection to the desert and an inclination that the Valley would serve us well.”

Her wife agrees. “With this house, we feel like we won the lottery,” Sarah adds. “Everyone is so nice. We’ve been dropped into this great community with wonderful restaurants, farmer’s markets, music venues and museums. It’s hip and modern and urban, but the small-town warmth is still pervasive.” 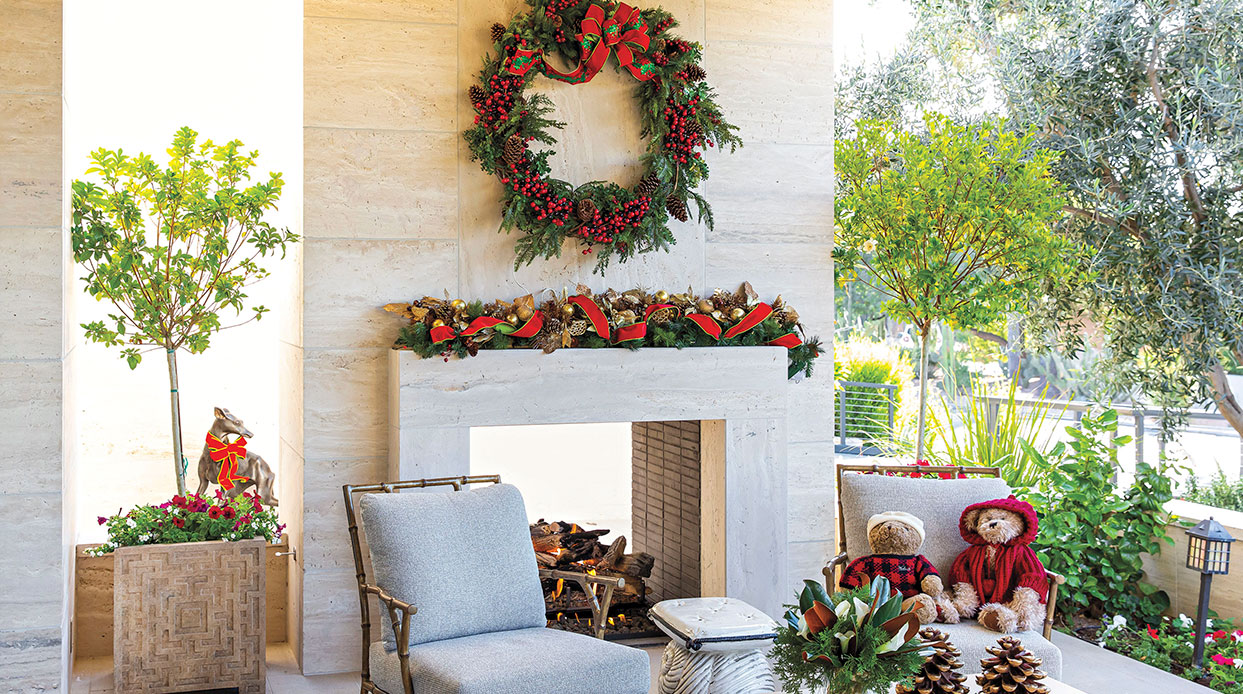 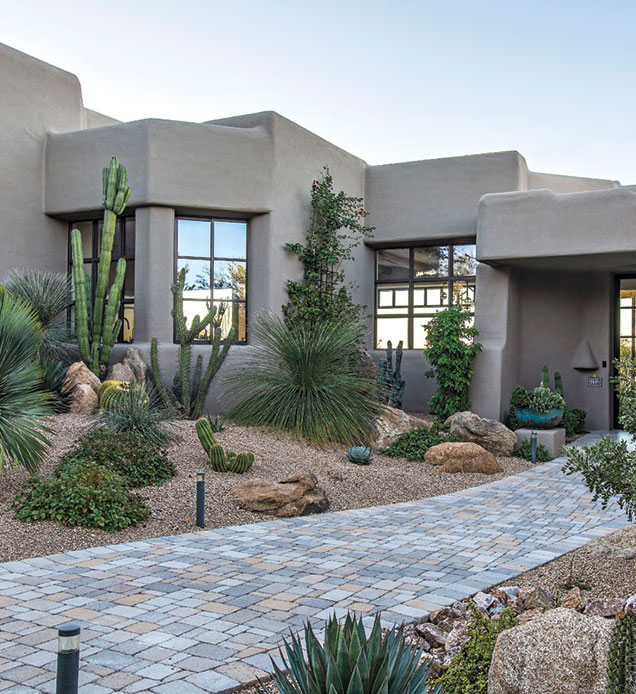 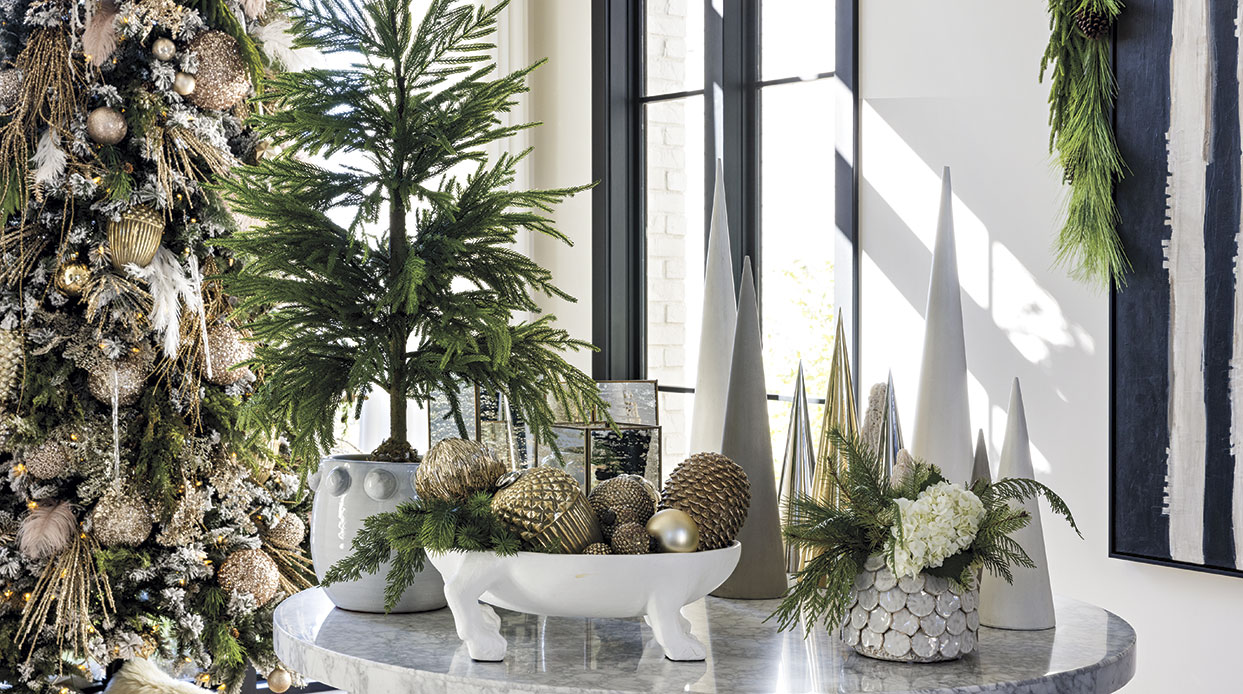